He has been a source of inspiration for many players. Aside from being a fantastic coach, Holtz is also known for his motivational speeches. He is widely commended for being one of the most prominent motivational speakers that inspire athletes and players worldwide.

In 2005, Holtz joined ESPN as a college football analyst and retired on November 2004. On May 2008, Holtz was elected to the College Football Hall of Fame.

We have compiled some of the best Lou Holtz quotes and sayings that explore his thoughts and views about life, sports, coaching, teamwork, and more.

1. “My philosophy in life is, Decide what you want to do. You have to have something to hope for.”

2. “I can’t believe that God put us on this earth to be ordinary.”

3. “We can all be successful and make money, but when we die, that ends. But when you are significant is when you help other people be successful. That lasts many a lifetime.”

4. “If you’re bored with life – you don’t get up every morning with a burning desire to do things – you don’t have enough goals.”

5. “If what you did yesterday seems big, you haven’t done anything today.”

6. “In the nineties, everybody wants to talk about their rights and privileges. Twenty-five years ago, people talked about their obligations and responsibilities.”

7. “I do know this: God does answer your prayers, but it’s not always in the way you expect. God knows what’s best for us, though, so there’s no need to worry when things don’t go how we originally wanted them to go.” 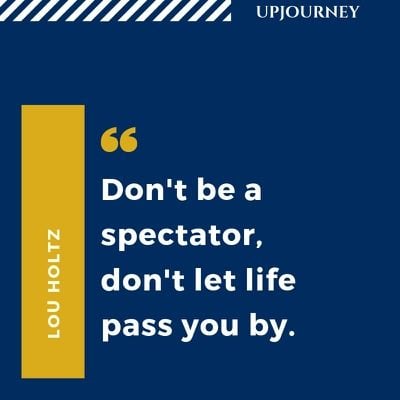 9. “Nothing on this earth is standing still. It’s either growing or it’s dying. No matter if it’s a tree or a human being.”

10. “I think life is a matter of choices and that wherever we are, good or bad, is because of choices we make.”

13. “I believe that having a spiritual life is so important in everybody’s life.”

14. “Don’t tell your problems to people: eighty percent don’t care, and the other twenty percent are glad you have them.”

15. “Life is ten percent what happens to you and ninety percent how you respond to it.”

16. “God answers prayers, but he doesn’t always answer it your way.”

18. “For victory in life, we’ve got to keep focused on the goal, and the goal is Heaven.” 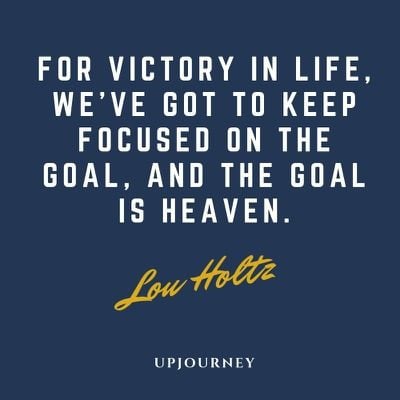 19. “Everyone goes through adversity in life, but what matters is how you learn from it.”

1. “Coaching is nothing more than eliminating mistakes before you get fired.”

3. “I do think coaches need to get away from the game more, though. It’s good for them.”

4. “As a coach, one thing that used to frustrate me was one player would make a bad decision, and that’s all you would read about in the papers all over the country. We have so many athletes do so many wonderful things for other people, and you never read about it.”

5. “When I left the University of Notre Dame, I honestly felt I would never coach again.”

6. “To win a national championship, you’ve got to be a little lucky.”

7. “In football, it’s the job of the player to play, the coach to coach, the official to officiate. Each guy is charged with upholding his end, nothing more. In golf, the player, coach, and official are rolled into one, and they overlap completely. Golf really is the best microcosm of life – or at least the way life should be.”

8. “Had I been a great athlete, I’m not sure I would have even gone into coaching. I may have turned out feeling that my life ended when my athletic career ended, as happens so many times with various athletes.”

9. “My first assistant-coaching job in football was at William & Mary in 1961. The pay wasn’t much, so to get $300 more per year, I agreed to coach the golf team. I didn’t even know how to keep score, and really, my main job was not to wreck the van on the way to tournaments.” 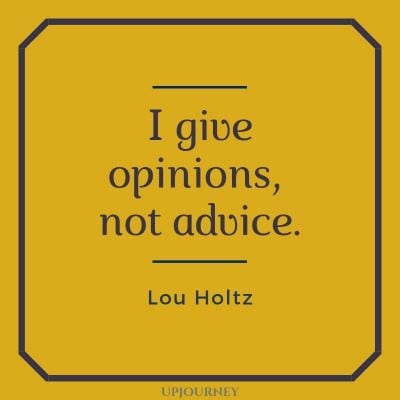 11. “I feel that God wants me to coach; otherwise, he wouldn’t have put the desire in me.”

12. “I have no desire at all to become the winningest coach at Notre Dame. The record belongs to Knute Rockne or some other coach in the future.”

13. “I look at athletes in all sports and try to picture what kind of football player they’d be, what position they’d play and so on.”

2. “In golf, the player, coach, and official are rolled into one, and they overlap completely. Golf really is the best microcosm of life – or at least the way life should be.”

3. “No matter what happens on the field, getting an education makes you a winner.”

4. “I won’t accept anything less than the best a player’s capable of doing… and he has the right to expect the best that I can do for him and the team!”

5. “It is a fine thing to have an ability, but the ability to discover ability in others is the true test.”

6. “A lifetime contract for a coach means if you’re ahead in the third quarter and moving the ball, they can’t fire you.”

7. “If you burn your neighbors’ house down, it doesn’t make your house look any better.” 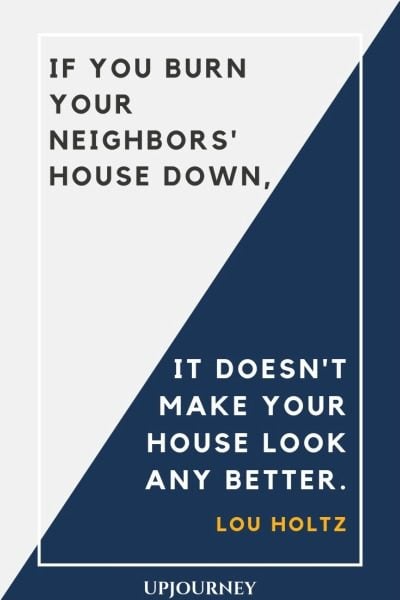 2. “I think that we have opportunities all around us – sometimes we just don’t recognize them.”

3. “Successful people will always tell you that you can do something. It’s the people who have never accomplished anything who will always discourage you from trying to achieve excellent things.”

5. “Virtually nothing is impossible in this world if you just put your mind to it and maintain a positive attitude.”

6. “Winners embrace hard work. They love the discipline of it, the trade-off they’re making to win. Losers, on the other hand, see it as punishment. And that’s the difference.”

7. “I follow three rules: Do the right thing, do the best you can, and always show people you care.” 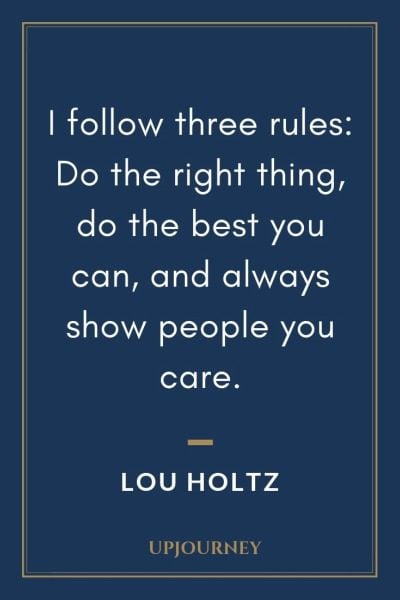 8. “The key to winning is choosing to do God’s will and loving others with all you’ve got.”

9. “Sacrifice, discipline, and prayer are essential. We gain strength through God’s word. We receive grace from the sacrament. And when we fumble due to sin – and it’s gonna happen – confession puts us back on the field.”

11. “You’ll never get ahead of anyone as long as you try to get even with him.” 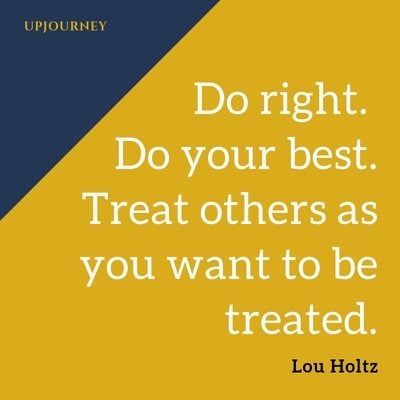 13. “You aren’t going to find anybody that’s going to be successful without making a sacrifice and without perseverance.”

15. “Motivation is simple. You eliminate those who are not motivated.”

16. “Ability is what you’re capable of doing. Motivation determines what you do. Attitude determines how well you do it.”

1. “How you respond to the challenge in the second half will determine what you become after the game, whether you are a winner or a loser.”

3. “The man who complains about the way the ball bounces is likely the one who dropped it.”

4. “Whenever you give up something, you must replace it with something.” 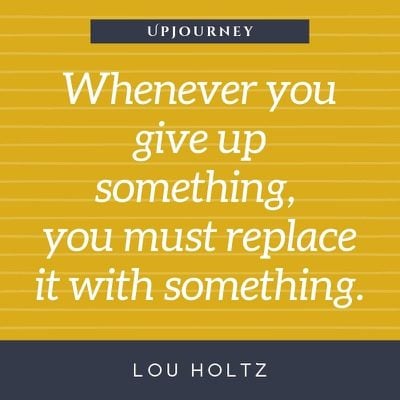 5. “I think everyone should experience defeat at least once during their career. You learn a lot from it.”

1. “I believe – we all pay taxes. I’m happy to pay it, but I hate to have it abused, money wasted, no accountability. That’s going to bother you.”

2. “Notre Dame is the one school that has a national recruiting base, from Florida to Texas to California.”

3. “I used to pray that God would make me a great athlete, and He never did.”

4. “I’m proud to be part of the Dr. Pepper Scholarship Giveaway. It’s a great program that gives me the chance to brighten the day for some lucky college students with free tuition.” 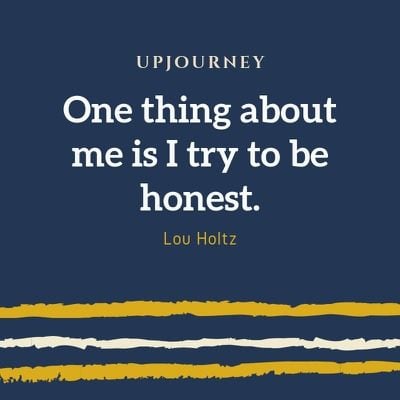 7. “I’m an old man, and all my life I’ve said that Notre Dame should remain independent because it’s a national school.”

9. “At age nine, I got a paper route. Sixty-six papers had to be delivered to sixty-six families every day. I also had to collect thirty cents a week from each customer. I owed the paper twenty cents per customer per week and got to keep the rest. When I didn’t collect, the balance came out of my profit. My average income was six dollars a week.”

10. “At home, I have a copy of April 21, 1986, issue of ‘Sports Illustrated.’ I’m on the cover with the blurb, ‘Can Lou Do It?’ I’d just arrived at Notre Dame, and with spring football underway, I was the focal point of that week’s coverage.”

11. “All an agent is going to do is buy things for a player, damage his eligibility, and make the player dependent on them.”

13. “I never learn anything talking. I only learn things when I ask questions.” 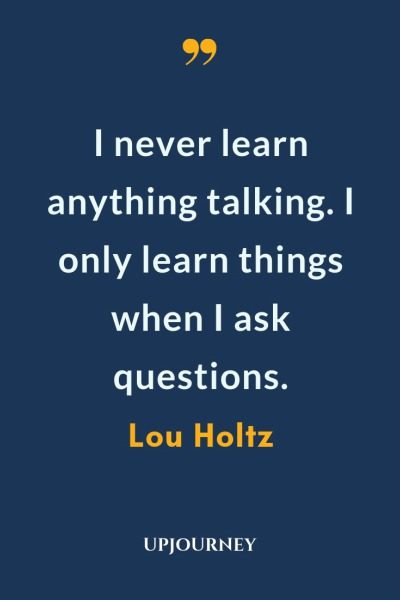 15. “The University of Notre Dame does not redshirt, and I endorse that policy completely. I am very much in favor of redshirting, but not at Notre Dame. But there’s no doubt about it. It puts us at a huge disadvantage.”

16. “If Tiger Woods had played football, he would have been a quarterback.”

17. “I was raised in a religious environment, and my wife is one of the more religious people that I have ever known.”

18. “The Sisters of Notre Dame at St. Aloysius Grade School influenced my life tremendously. This was due to the fact that they encouraged you always to make sure that God is the focus of your life, and they didn’t allow you to do anything except to the very best of your ability.”

19. “I’ll assure you this: I will have nothing to do with politics.”

21. “If you look at the history of Notre Dame, if you hire a coach who’s been successful at another college program, they’re going to be ultra successful at Notre Dame because the talent will always be there.”

22. “When people need love and understanding and support the most is when they deserve it the least.”

23. “When the bank asks me about my assets, I include my friendship with Regis Philbin.”

24. “I truly believe the things Notre Dame stands for.” 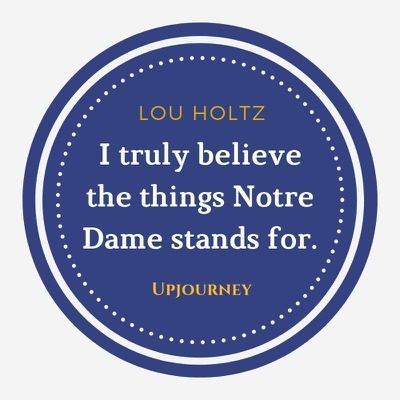 26. “I was born January 6, 1937, eight years after Wall Street crashed and two years before John Steinbeck published The Grapes of Wrath, his Pulitzer Prize-winning novel about the plight of a family during the Great Depression.”

28. “The problem with having a sense of humor is often that people you use it on aren’t in a very good mood.”

31. “Our cellar home had a kitchen and a combination bedroom and half bath, which meant we had a sink next to the bed. We had no refrigerator, no shower or tub, and no privacy. My parents shared the bedroom with my sister and me.”

32. “We were at a beach one summer, and I had a bathing suit on. My wife looked at me and said: Boy, you are skinny, aren’t you? I said: Honey, I’d like to remind you that it was minor defects like this that kept me from getting a better wife.”

33. “In the successful organization, no detail is too small to escape close attention.”

34. “I have to admit, I sometimes wonder how much more successful I would have been as a coach had it not been for my spending summers on the golf course. I could have watched more film, that’s for sure. One advantage Joe Paterno had over me was that he didn’t play golf.”

36. “When I die, and people realize that I will not be resurrected in three days, they will forget me. That is the way it should be.”

37. “I was raised as a Catholic on both sides of the family. I went to a Catholic grade school and thought everybody in the country was Catholic because that’s all I ever was associated with.”

38. “I believe in the crucifixion of Jesus Christ.”

39. “How do you know what it’s like to be stupid if you’ve never been smart?” 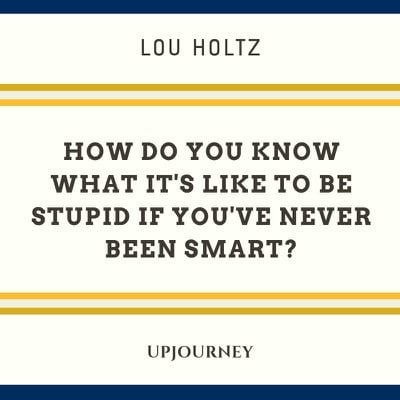 41. “I don’t think there’s been anything in the game of football in my lifetime that has changed college football more than redshirting.

If you would like to learn more about the life of Lou Holtz, we would suggest you read Wins, Losses, and Lessons: An Autobiography. 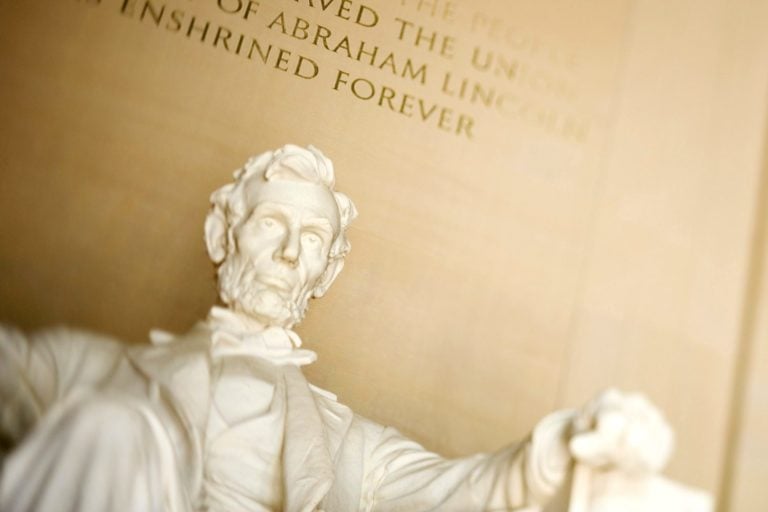 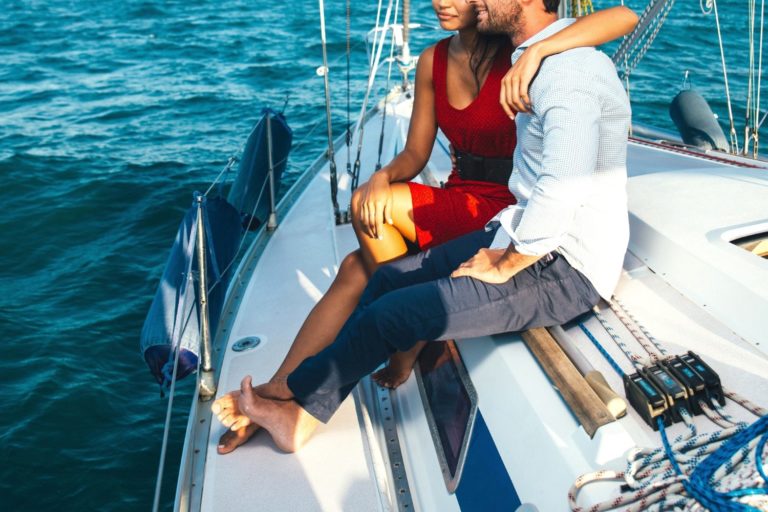 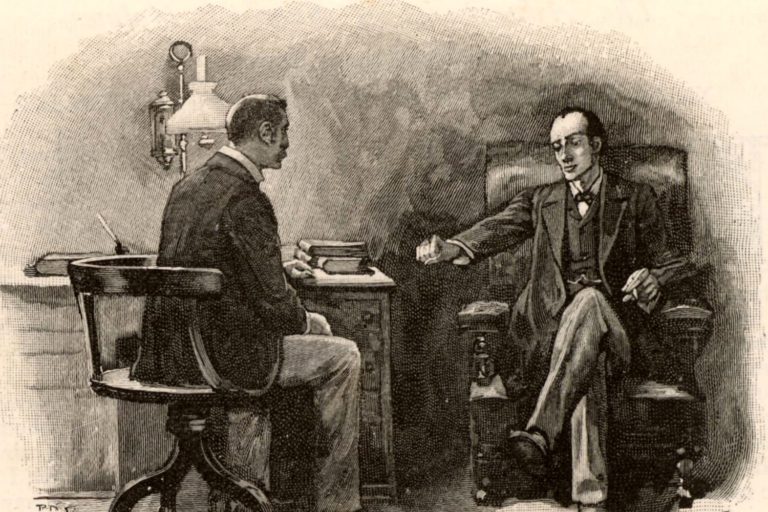 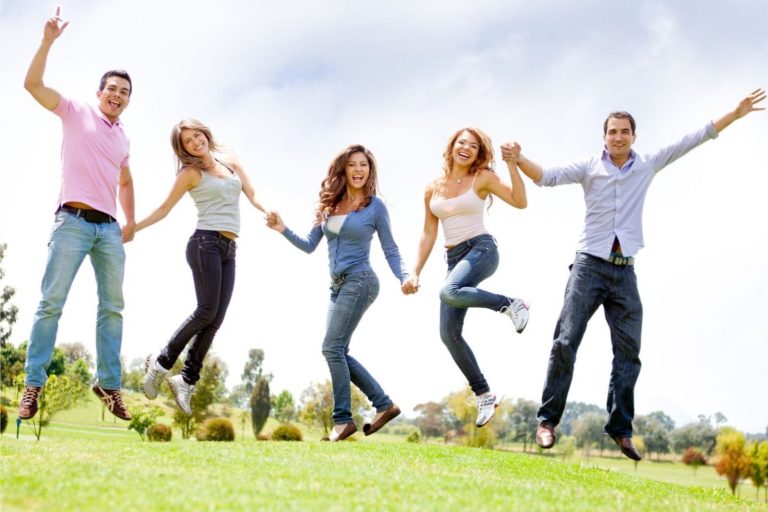 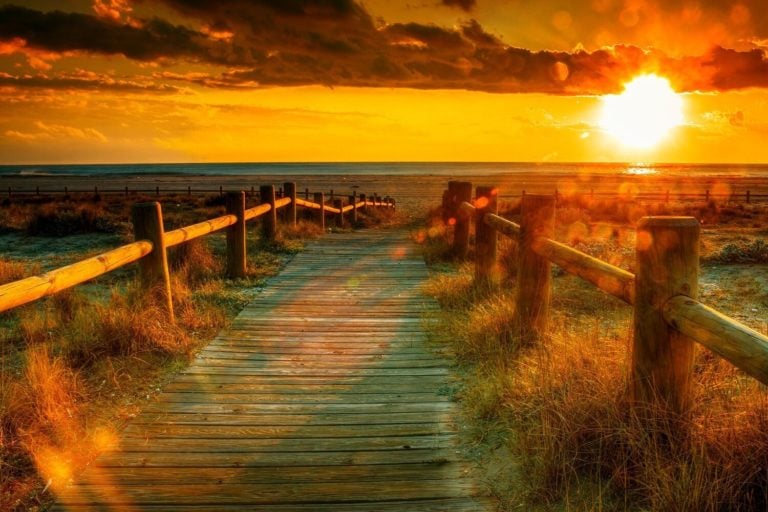