Samuel Langhorne Clemens, or most commonly known by his pen name Mark Twain, was a Famous American writer, entrepreneur, humorist, and lecturer.

His novels, The Adventures of Tom Sawyer in 1876 and its sequel, The Adventures of Huckleberry Finn in 1885 gained a lot of recognition, so much so that the latter book was often described as “The Great American Novel.” William Faulkner (another well-known American writer, and Nobel Prize laureate) called Mark Twain, “the father of American literature.”

His humor and satire gained praise from both critics and peers, and he was also a friend to some well-known artists, presidents, and even European royalty. Twain was also commended as the “greatest humorist this country has produced.”

Up until this day, Mark Twain is still an inspiration to everyone. His writings and lectures brought international attention, and some of it was also translated to other languages.

Have a look at this extensive collection of Mark Twain quotes about life, education, goodness, and more!

1. “Good friends, good books and a sleepy conscience: this is the ideal life.”

2. “Part of the secret of a success in life is to eat what you like and let the food fight it out inside.”

3. “I came in with Halley’s Comet in 1835. It is coming again next year, and I expect to go out with it. It will be the greatest disappointment of my life if I don’t go out with Halley’s Comet. The Almighty has said, no doubt: ‘Now here are these two unaccountable freaks; they came in together, they must go out together.”

4. “What a wee little part of a person’s life are his acts and his words! His real life is led in his head and is known to none but himself.”

5. “All you need in this life is ignorance and confidence, and then success is sure.”

6. “Yes, you can lose somebody overnight, yes, your whole life can be turned upside down. Life is short. It can come and go like a feather in the wind.” 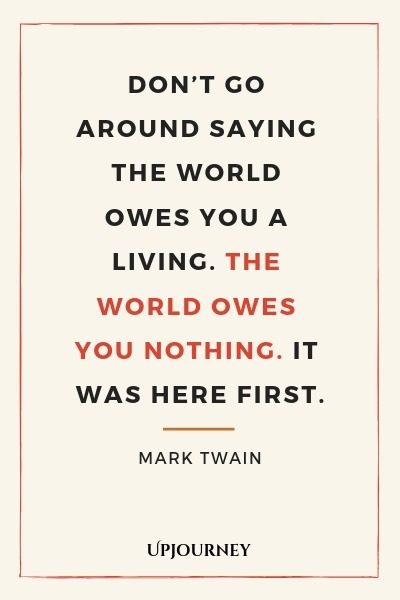 8. “Life would be infinitely happier if we could only be born at the age of eighty and gradually approach eighteen.”

9. “The fear of death follows from the fear of life. A man who lives fully is prepared to die at any time.”

10. “I was in a very deep, dark slump, and I needed to find a way to get myself out of it. I had to force myself back out into life, back out into experiencing things.”

11. “I really feel like life will dictate itself. You should allow it to unfold as naturally as possible. Just go with the flow. When you’re really desperate, you say a few prayers and hope for the best. That’s the way I’ve always lived my life.”

12. “When we remember we are all mad, the mysteries disappear and life stands explained.”

13. “Later in my life, I’m going to look back and smile and be very fulfilled. I know that if I don’t give it my all right now I’ll regret it later. That’s very important to me because I’ve worked all my life to have this.”

14. “To succeed in life, you need two things: ignorance and confidence.”

15. “I lost my sense of trust, honesty, and compassion. I crashed down and became what I consider an emotional mess. I’ve never been so miserable in my whole life. I just wanted to go to bed and never get up.”

1. “Education consists mainly of what we have unlearned.”

2. “In the first place, God made idiots. That was for practice. Then he made school boards.”

3. “I never let schooling interfere with my education.” 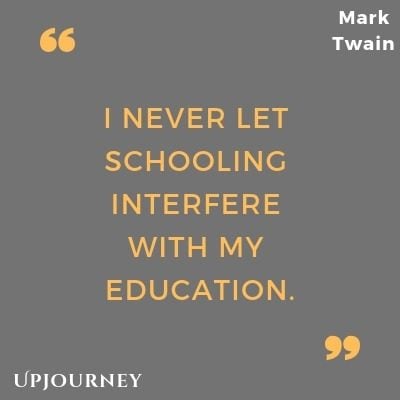 4. “A person with a new idea is a crank until the idea succeeds.”

5. “You can’t depend on your eyes when your imagination is out of focus.”

6. “Fiction is obliged to stick to possibilities. Truth isn’t.”

7. “Soap and education are not as sudden as a massacre, but they are more deadly in the long run.”

8. “Training is everything. The peach was once a bitter almond; cauliflower is nothing but cabbage with a college education.”

9. “Cauliflower is nothing but cabbage with a college education.”

1. “Good breeding consists in concealing how much we think of ourselves and how little we think of the other person.”

2. “In ‘Huckleberry Finn,’ I have drawn Tom Blankenship exactly as he was. He was ignorant, unwashed, insufficiently fed; but he had as good a heart as ever any boy had.”

3. “Few things are harder to put up with than the annoyance of a good example.”

4. “Thunder is good, thunder is impressive, but it is lightning that does the work.”

6. “The man who does not read good books has no advantage over the man who cannot read them.” 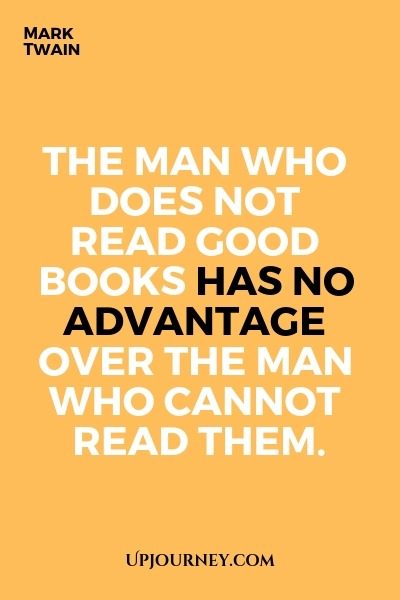 7. “It’s good sportsmanship to not pick up lost golf balls while they are still rolling.”

8. “The best way to cheer yourself up is to try to cheer somebody else up.”

9. “It is by the goodness of God that in our country we have those three unspeakably precious things: freedom of speech, freedom of conscience, and the prudence never to practice either of them.”

1. “Get your facts first, then you can distort them as you please.”

2. “My mother had a great deal of trouble with me, but I think she enjoyed it.”

3. “By trying we can easily endure adversity. Another man’s, I mean.”

4. “The reports of my death have been greatly exaggerated.”

5. “Substitute ‘damn’ every time you’re inclined to write ‘very’ your editor will delete it and the writing will be just as it should be.”

6. “All generalizations are false, including this one.”

7. “Go to Heaven for the climate, Hell for the company.”

8. “Honesty is the best policy – when there is money in it.”

9. “My books are like water those of the great geniuses are wine. (Fortunately) everybody drinks water.”

10. “Sometimes too much to drink is barely enough.” 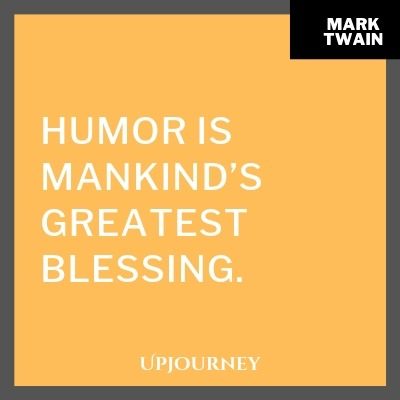 1. “A person with a new idea is a crank until the idea succeeds.”

3. “The finest clothing made is a person’s own skin, but, of course, society demands something more than this.”

4. “Forgiveness is the fragrance that the violet sheds on the heel that has crushed it.”

5. “Anger is an acid that can do more harm to the vessel in which it is stored than to anything on which it is poured.”

6. “Do the thing you fear most and the death of fear is certain.” 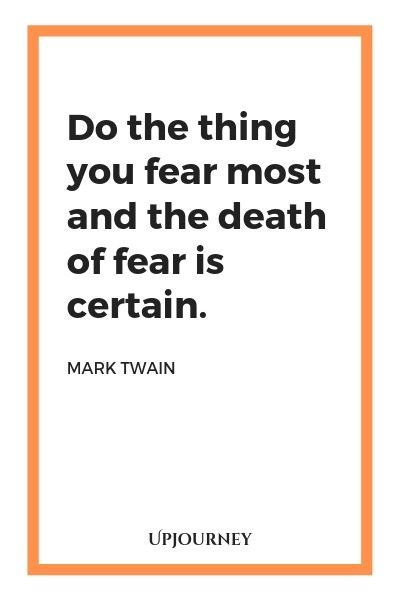 9. “It’s no wonder that truth is stranger than fiction. Fiction has to make sense.”

10. “I must have a prodigious quantity of mind it takes me as much as a week sometimes to make it up.”

11. “Wrinkles should merely indicate where smiles have been.”

12. “A man who carries a cat by the tail learns something he can learn in no other way.”

13. “Patriot: the person who can holler the loudest without knowing what he is hollering about.”

14. “The very ink with which history is written is merely fluid prejudice.”

15. “Why shouldn’t truth be stranger than fiction? Fiction, after all, has to make sense.”

16. “I didn’t attend the funeral, but I sent a nice letter saying I approved of it.” 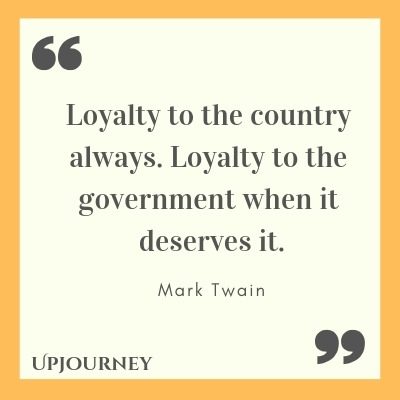 18. “The secret source of humor is not joy but sorrow there is no humor in Heaven.”

19. “Whenever you find yourself on the side of the majority, it is time to pause and reflect.”

20. “Be careful about reading health books. You may die of a misprint.”

21. “Truth is stranger than fiction, but it is because Fiction is obliged to stick to possibilities Truth isn’t.”

22. “Principles have no real force except when one is well-fed.”

23. “Lord save us all from a hope tree that has lost the faculty of putting out blossoms.”

25. “If you tell the truth, you don’t have to remember anything.” 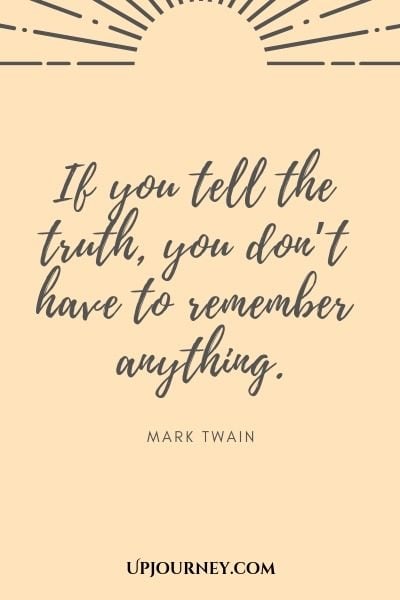 30. “A round man cannot be expected to fit in a square hole right away. He must have time to modify his shape.”

32. “It is curious that physical courage should be so common in the world and moral courage so rare.”

33. “Prophesy is a good line of business, but it is full of risks.”

34. “It is not best that we should all think alike it is a difference of opinion that makes horse races.”

35. “There are people who can do all fine and heroic things but one – keep from telling their happiness to the unhappy.” 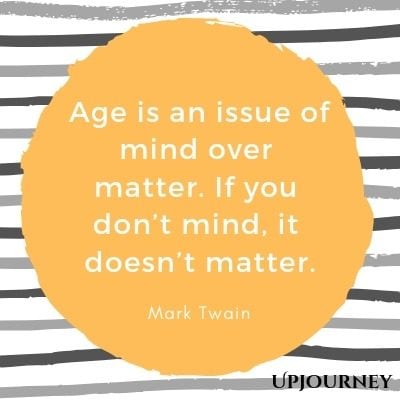 37. “It usually takes me more than three weeks to prepare a good impromptu speech.”

38. “Prosperity is the best protector of principle.”

39. “When people do not respect us we are sharply offended yet in his private heart no man much respects himself.”

41. “The Christian’s Bible is a drug store. Its contents remain the same, but the medical practice changes.”

42. “The secret of getting ahead is getting started.” 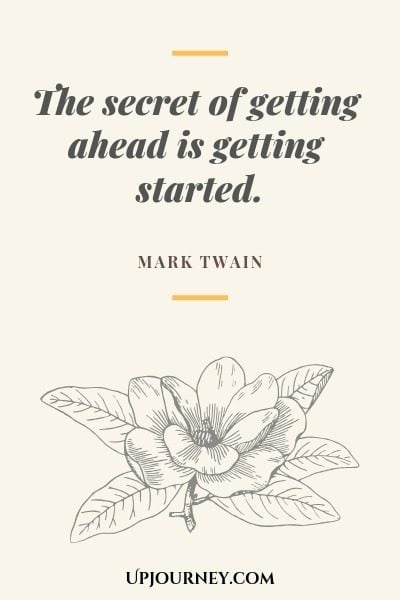 43. “We have the best government that money can buy.”

44. “All you need is ignorance and confidence and the success is sure.”

46. “Clothes make the man. Naked people have little or no influence on society.”

47. “Everything human is pathetic. The secret source of humor itself is not joy but sorrow. There is no humor in heaven.”

48. “A man’s character may be learned from the adjectives which he habitually uses in conversation.”

49. “It’s good sportsmanship to not pick up lost golf balls while they are still rolling.”

50. “I am an old man and have known a great many troubles, but most of them never happened.”

51. “Truth is the most valuable thing we have. Let us economize it.”

52. “Courage is resistance to fear, mastery of fear, not absence of fear.”

54. “Truth is mighty and will prevail. There is nothing wrong with this, except that it ain’t so.”

56. “Only one thing is impossible for God: To find any sense in any copyright law on the planet.” 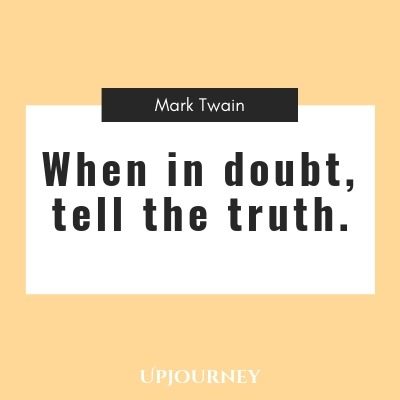 58. “Patriotism is supporting your country all the time, and your government when it deserves it.”