Oliver Napoleon Hill was an outstanding American self-help author. He is best known for his book titled “Think and Grow Rich” in 1937 which is amongst the top 10 bestselling self-help books of all time.

He was also famous for writing a wide range of books that highlighted several ways in which one could grow rich, and most of his books became hugely successful. His works emphasized that fervid expectations are necessary for advancing one’s life.

He had initially wanted to become a lawyer, so he began attending law school, but he could not complete his degree due to lack of funds and eventually focused on writing. Hill was a talented writer and orator and shared plenty of wisdom through his life and works. His other famous works include “The Law of Success” and “Outwitting the Devil”; which also proved to be remarkably popular among his readers.

We have compiled some of the most notable Napoleon Hill quotes and sayings that explores his thoughts and views about life, success, courage, and more.

1. “It is literally true that you can succeed best and quickest by helping others to succeed.”

2. “No man can succeed in a line of endeavor which he does not like.”

3. “Success in its highest and noblest form calls for peace of mind and enjoyment and happiness which come only to the man who has found the work that he likes best.”

4. “Before success comes in any man’s life, he’s sure to meet with much temporary defeat and, perhaps some failures. When defeat overtakes a man, the easiest and the most logical thing to do is to quit. That’s exactly what the majority of men do.”

6. “Persistence is to the character of man as carbon is to steel.”

7. “The ladder of success is never crowded at the top.” 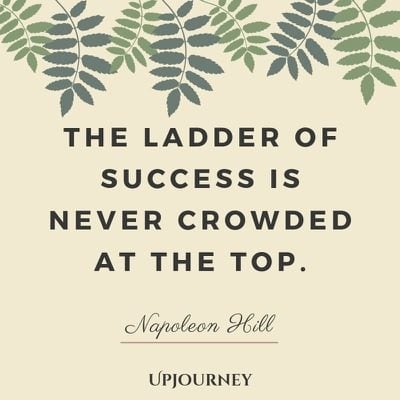 8. “Patience, persistence and perspiration make an unbeatable combination for success.”

9. “No man ever achieved worth-while success who did not, at one time or other, find himself with at least one foot hanging well over the brink of failure.”

10. “You might well remember that nothing can bring you success but yourself.”

1. “Every person who wins in any undertaking must be willing to cut all sources of retreat. Only by doing so can one be sure of maintaining that state of mind known as a burning desire to win – essential to success.”

2. “If you cannot do great things, do small things in a great way.”

4. “Your big opportunity may be right where you are now.” 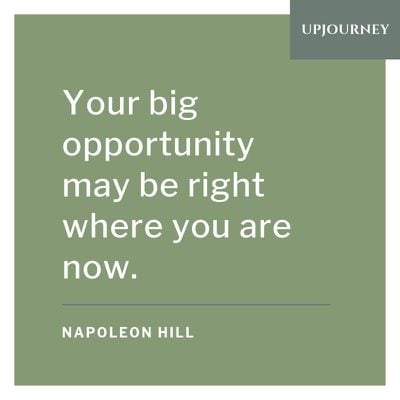 5. “Every adversity, every failure, every heartache carries with it the seed on an equal or greater benefit.”

6. “When defeat comes, accept it as a signal that your plans are not sound, rebuild those plans, and set sail once more toward your coveted goal.”

7. “Effort only fully releases its reward after a person refuses to quit.”

8. “It has always been my belief that a man should do his best, regardless of how much he receives for his services, or the number of people he may be serving or the class of people served.”

9. “Opportunity often comes disguised in the form of misfortune, or temporary defeat.”

10. “The majority of men meet with failure because of their lack of persistence in creating new plans to take the place of those which fail.”

11. “Edison failed 10, 000 times before he made the electric light. Do not be discouraged if you fail a few times.”

12. “Strength and growth come only through continuous effort and struggle.” 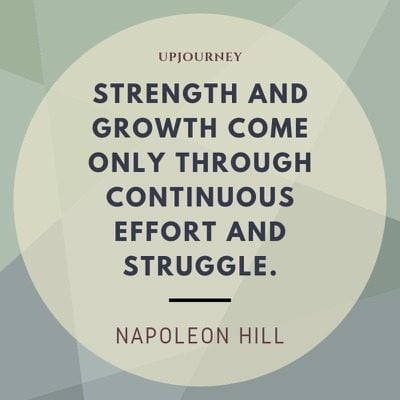 13. “Big pay and little responsibility are circumstances seldom found together.”

Related: Famous and Inspirational Quotes And Sayings About Courage

1. “It takes half your life before you discover life is a do-it-yourself project.”

2. “If you do not conquer self, you will be conquered by self.” 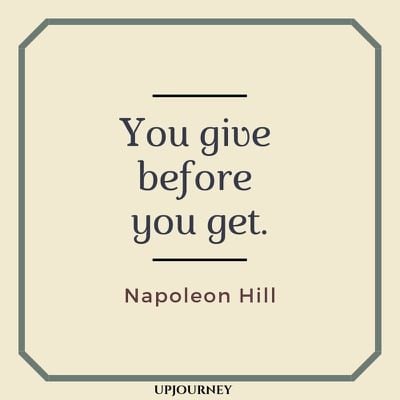 4. “One must marry one’s feelings to one’s beliefs and ideas. That is probably the only way to achieve a measure of harmony in one’s life.”

5. “The world has the habit of making room for the man whose actions show that he knows where he is going.”

6. “The best way to sell yourself to others is first to sell the others to yourself.”

1. “When your desires are strong enough you will appear to possess superhuman powers to achieve.”

2. “There is one quality which one must possess to win, and that is definiteness of purpose, the knowledge of what one wants, and a burning desire to possess it.”

3. “Desire is the starting point of all achievement, not a hope, not a wish, but a keen pulsating desire which transcends everything.”

4. “Your ability to use the principle of autosuggestion will depend, very largely, upon your capacity to concentrate upon a given desire until that desire becomes a burning obsession.”

5. “Create a definite plan for carrying out your desire and begin at once, whether you ready or not, to put this plan into action.” 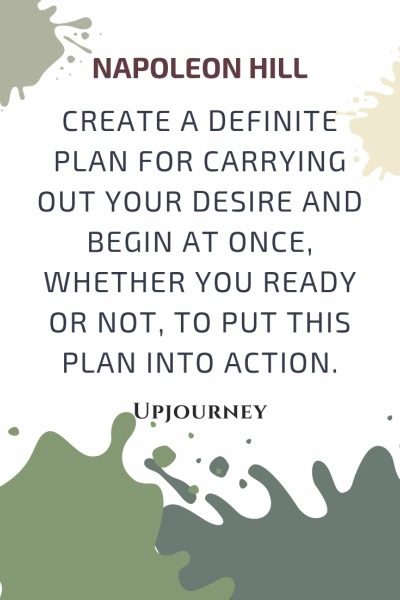 6. “Reduce your plan to writing. The moment you complete this, you will have definitely given concrete form to the intangible desire.”

7. “War grows out of the desire of the individual to gain an advantage at the expense of his fellow man.”

1. “Cherish your visions and your dreams as they are the children of your soul, the blueprints of your ultimate achievements.”

2. “More gold has been mined from the thoughts of men than has been taken from the earth.”

3. “All achievements, all earned riches, have their beginning in an idea.”

4. “Wise men, when in doubt whether to speak or to keep quiet, give themselves the benefit of the doubt, and remain silent.”

5. “All the breaks you need in life wait within your imagination, Imagination is the workshop of your mind, capable of turning mind energy into accomplishment and wealth.”

6. “Just as our eyes need light in order to see, our minds need ideas in order to conceive.”

7. “Ideas are the beginning points of all fortunes.” 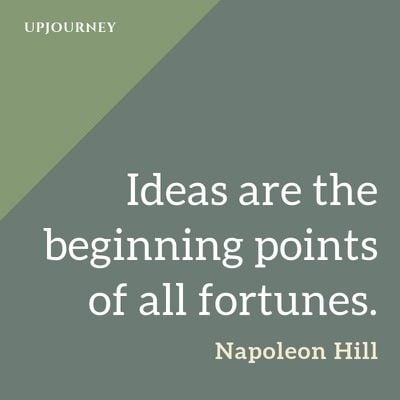 9. “No man is ever whipped until he quits in his own mind.”

10. “Any idea, plan, or purpose may be placed in the mind through repetition of thought.”

11. “The starting point of all achievement is desire.”

12. “Man, alone, has the power to transform his thoughts into physical reality; man, alone, can dream and make his dreams come true.”

13. “There are no limitations to the mind except those we acknowledge.” 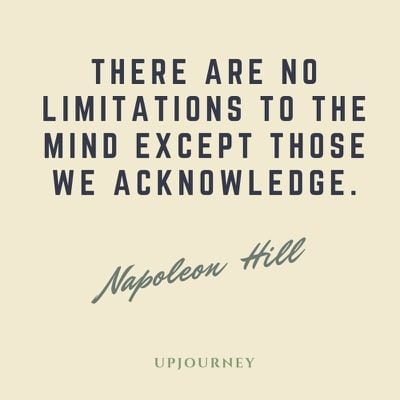 14. “First comes thought; then organization of that thought, into ideas and plans; then transformation of those plans into reality. The beginning, as you will observe, is in your imagination.”

2. “The battle is all over except the “shouting” when one knows what is wanted and has made up his mind to get it, whatever the price may be.”

3. “You can start right where you stand and apply the habit of going the extra mile by rendering more service and better service than you are now being paid for.”

4. “If you must speak ill of another, do not speak it, write it in the sand near the water’s edge.” 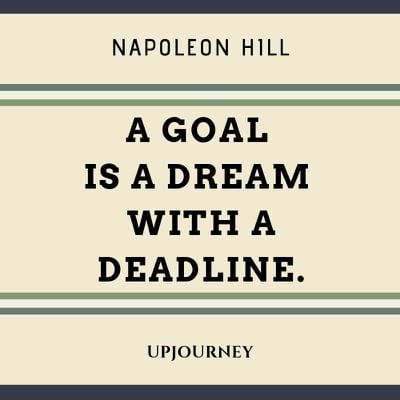 6. “The most interesting thing about a postage stamp is the persistence with which it sticks to its job.”

7. “Nature cannot be tricked or cheated. She will give up to you the object of your struggles only after you have paid her price.”

8. “No accurate thinker will judge another person by that which the other person’s enemies say about him.”

9. “Happiness is found in doing, not merely possessing.”

10. “Fears are nothing more than a state of mind.”

11. “Victory is always possible for the person who refuses to stop fighting.”

12. “We begin to see, therefore, the importance of selecting our environment with the greatest of care, because the environment is the mental feeding ground out of which the food that goes into our minds is extracted.”

13. “Think twice before you speak, because your words and influence will plant the seed of either success or failure in the mind of another.” 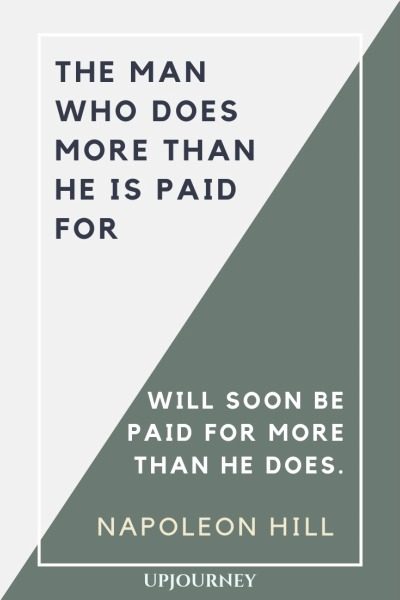 16. “Hold a picture of yourself long and steadily enough in your mind’s eye, and you will be drawn toward it.”

17. “Everyone enjoys doing the kind of work for which he is best suited.”

18. “Great achievement is usually born of great sacrifice, and is never the result of selfishness.”

19. “Education comes from within; you get it by struggle and effort and thought.”

20. “Money without brains is always dangerous.”

21. “Procrastination is the bad habit of putting of until the day after tomorrow what should have been done the day before yesterday.”

22. “Action is the real measure of intelligence.”

If you would like to know more about the life and works of Napoleon Hill, we would suggest you read, Think and Grow Rich: The Landmark Bestseller Now Revised and Updated for the 21st Century.