He is seldom called “the father of modern linguistics” and is also one of the founders of the field of cognitive science and a significant figure in analytic philosophy. Chomsky also holds a joint appointment as laureate professor at the University of Arizona and as Institute Professor Emeritus at MIT.

Aside from his academic career, Chomsky is also the author of over 100 books on topics such as politics, linguistics, war, and mass media. He has affected and influenced a broad array of academic areas as one of the most cited scholars in history.

He is globally accepted as one of the incomparable public intellectuals of the modern era who helped spark a vital revolution in the human sciences, contributing to the advancement of a new cognitivistic structure for the study of language and the mind.

He has inspired millions of people with his philosophical wisdom. Here are some of the most notable Noam Chomsky quotes and sayings that explore his views and thoughts regarding life, media, war, and many more.

1. “Propaganda is to a democracy what the bludgeon is to a totalitarian state.”

2. “Censorship is never over for those who have experienced it. It is a brand on the imagination that affects the individual who has suffered it, forever.” 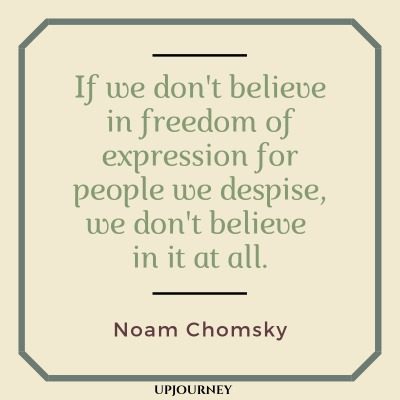 4. “All over the place, from the popular culture to the propaganda system, there is constant pressure to make people feel that they are helpless, that the only role they can have is to ratify decisions and to consume.”

5. “The United States is unusual among the industrial democracies in the rigidity of the system of ideological control – “indoctrination,” we might say – exercised through the mass media.”

1. “We can, for example, be fairly confident that either there will be a world without war or there won’t be a world – at least, a world inhabited by creatures other than bacteria and beetles, with some scattering of others.” 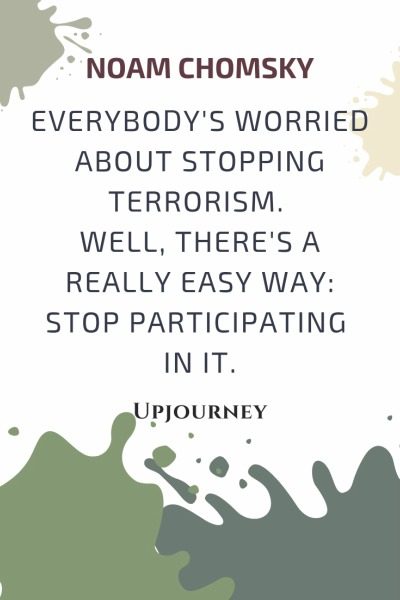 4. “The more you can increase fear of drugs and crime, welfare mothers, immigrants, and aliens, the more you control all the people.”

5. “If the Nuremberg laws were applied, then every post-war American president would have been hanged.”

6. “Resistance is feasible even for those who are not heroes by nature, and it is an obligation, I believe, for those who fear the consequences and detest the reality of the attempt to impose American hegemony.”

1. “The Bible is one of the most genocidal books in history.”

2. “Unlimited economic growth has the marvelous quality of stilling discontent while maintaining privilege, a fact that has not gone unnoticed among liberal economists.”

4. “In this possibly terminal phase of human existence, democracy, and freedom are more than just ideals to be valued – they may be essential to survival.”

6. “Human language appears to be a unique phenomenon, without significant analog in the animal world.”

7. “To some degree, it matters who’s in office, but it matters more how much pressure they’re under from the public.”

8. “If we choose, we can live in a world of comforting illusion.” 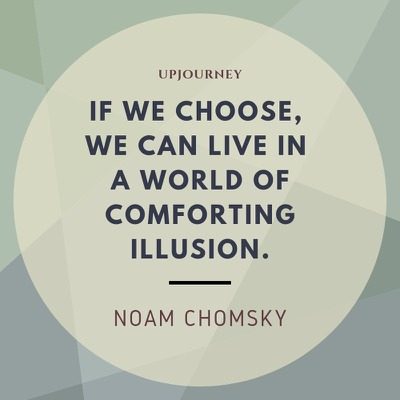 9. “I have often thought that if a rational Fascist dictatorship were to exist, then it would choose the American system.”

10. “Either you repeat the same conventional doctrines everybody is saying, or else you say something true, and it will sound like it’s from Neptune.”

11. “The only justification for repressive institutions is the material and cultural deficit. But such institutions, at certain stages of history, perpetuate and produce such a deficit, and even threaten human survival.”

12. “States are not moral agents, people are, and can impose moral standards on powerful institutions.”

13. “The intellectual tradition is one of servility to power, and if I didn’t betray it I’d be ashamed of myself.”

14. “The people who were honored in the Bible were the false prophets. It was the ones we call the prophets who were jailed and driven into the desert.”

15. “The principle that human nature, in its psychological aspects, is nothing more than a product of history and given social relations removes all barriers to coercion and manipulation by the powerful.”

16. “As soon as questions of will or decision or reason or choice of action arise, human science is at a loss.” 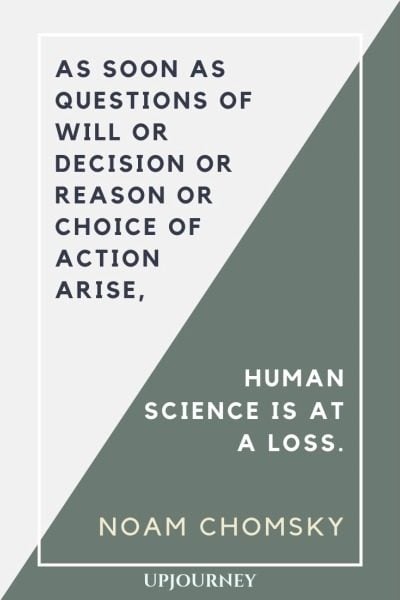 17. “Education must provide the opportunities for self-fulfillment; it can at best provide a rich and challenging environment for the individual to explore, in his own way.”

If you would like to learn more about the life and work of Noam Chomsky, we would suggest you read Understanding Power: The Indispensible Chomsky.