Pablo Neruda was a Nobel Prize-winning poet-diplomat and politician from Chile. He began writing poems when he was only 10 years old and later became a known poet when he was 13.

He wrote in a variety of ways, including historical epics, surrealist poems, overtly political manifestos, and romantic love poems. Due to his unwavering talent and poetic mastery, he won the Nobel Prize for Literature in the year 1971.

Neruda had prostate cancer and was hospitalized at the time of the coup d’état led by a Chilean general and dictator. After a few days in the hospital, Neruda returned home when he speculated a doctor of injecting him with an unknown substance. He then died in his home on September 23, 1973, just hours after leaving the hospital. The reports state that he died due to heart failure, but many believed that he had been killed under questionable circumstances.

Neruda is often recognized as the national poet of Chile, and his works and influence are known worldwide. Here are 9 beautiful Pablo Neruda quotes and sayings that explores his views about love, poetry, life, and much more.

1. “I want to do to you what spring does with the cherry trees.”

2. “I grew up in this town, my poetry was born between the hill and the river, it took its voice from the rain, and like the timber, it steeped itself in the forests.” 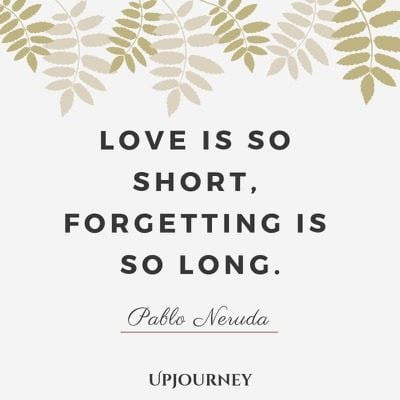 4. “But from each crime are born bullets that will one day seek out in you where the heart lies.”

5. “The books that help you most are those which make you think that most. The hardest way of learning is that of easy reading; but a great book that comes from a great thinker is a ship of thought, deep freighted with truth and beauty.”

7. “And one by one the nights between our separated cities are joined to the night that unites us.”

8. “A child who does not play is not a child, but the man who doesn’t play has lost forever the child who lived in him and who he will miss terribly.”

9. “You can cut all the flowers but you cannot keep spring from coming.” 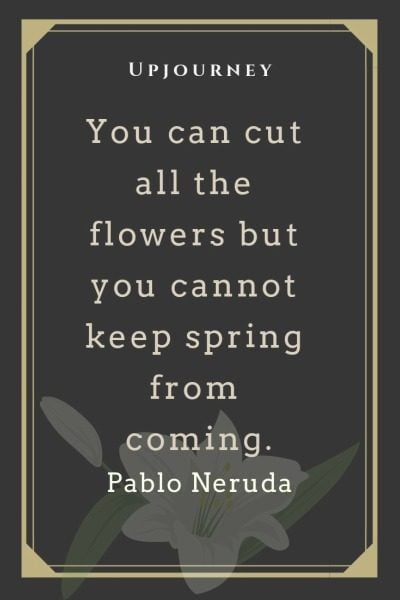 If you’d like to know more about Pablo Neruda’s works and writings, we would suggest you read The Essential Neruda: Selected Poems (Bilingual Edition).