Paul William Walker IV, popularly known as Paul Walker, was an American actor and philanthropist best known for his role in the blockbuster hit The Fast and the Furious.

Before he became Brian O’Conner, Paul attended several community colleges in Southern California, majoring in marine biology. However, his love for acting was far stronger than anything else, so he decided to make a full-time career out of it. He led supporting roles in numerous shows and movies, but eventually gained attention and fame for his breakthrough role in the successful action film The Fast and the Furious (2001).

Besides being an excellent actor, Paul also carried out various philanthropic acts. He founded the disaster-relief humanitarian organization called Reach Out Worldwide (ROWW), which helped people in areas affected by natural disasters. Paul worked alongside other volunteers, by funding trips to disaster-stricken areas that other organizations dared not to go for fear of their own safety.

In the middle of filming the movie Furious 7 in 2013, Paul tragically died due to a car accident after attending a charity event he hosted for the victims of Typhoon Haiyan in the Philippines. Although he died during the prime years of his life, he left behind a legacy built on faith, kindness, and generosity.

We have listed some of the best Paul Walker quotes and sayings that show his views about life, love, career, cars, sports, and a whole lot more.

1. “I hope I’m in a position to make stuff that I really want to make as opposed to stuff that I just have to make for money reasons, or to sustain a certain marquee value.” 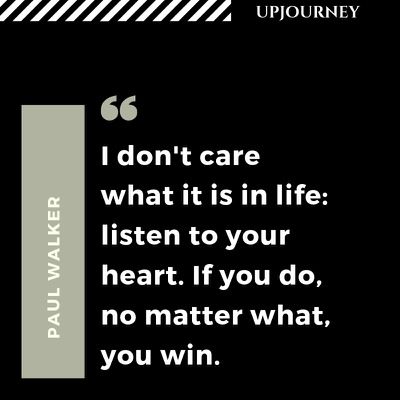 4. “There’s a lot of guys that just get comfortable with their positions and rest on their laurels. I had to earn my way.”

5. “If you spend any time with a man, you’ll realize that we’re all still little boys.”

10. “What I’ve found recently is the heart, the soul, whatever you want to call it, it doesn’t differentiate: If you really live the experience making a movie, it’s the same as living it in real life, as crazy as it sounds.” 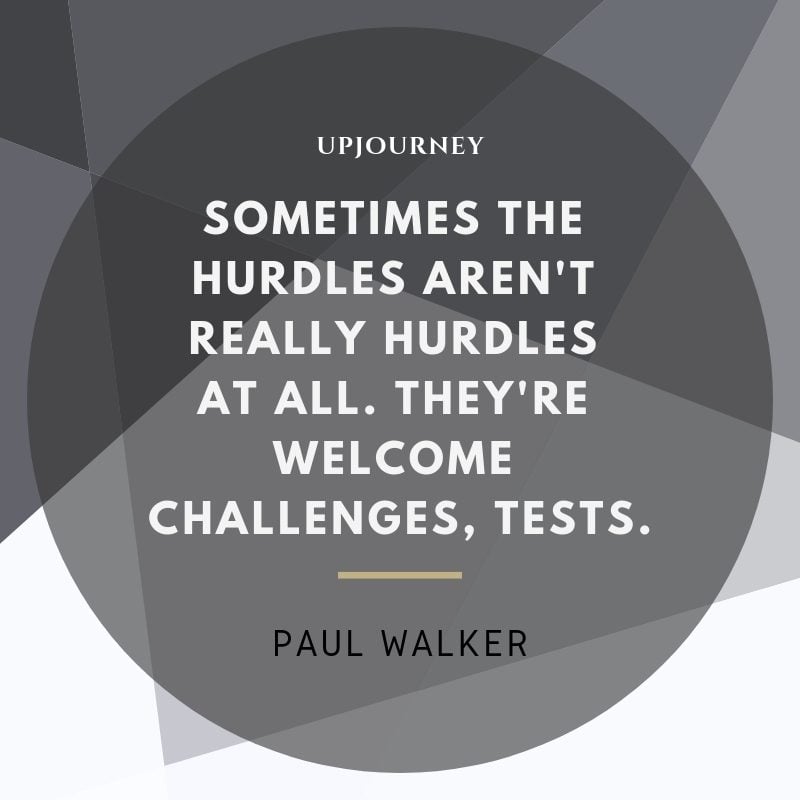 12. “The dream is to have it all. Who says you can’t have your cake and eat it too? Live this life, that life, this life, you know? You only live one time – I want to get it all in.”

13. “Thing is, I went to a born-again Christian high school, was brought up in a traditional Mormon family where these ideas about parenting are of structure and sacrifice. To think outside of that idea of family and parenting that I’ve grown up with is tough but also very freeing.”

14. “Maybe this is just horribly bad, but I think I’ve had enough successes to where the journey is more important to me now. There’s no guarantee, no matter what. We get one run in life.”

15. “I learned a long time ago that if you subscribe and believe the good, you have to believe the bad. My measure is my heart and what I know.”

1. “I really like the Evo from ‘2Fast.’ That car is a lot of fun as a daily driver. They’re really quick on the track, too, when they’re set up right.” 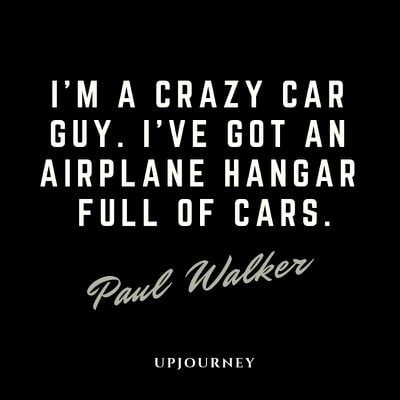 4. “I have an airplane hangar with 17 cars in it. That’s no joke. I have a ‘half pipe’ in there, too – you know, like a big ramp, where I skateboard. It’s awesome. It’s the ultimate fantasy.”

5. “I’ve always wanted to race cars, ever since I was a young boy, as I think a lot of guys have.”

1. “I’m a surfer. I grew up in Southern California and used to surf twice a day, every day.”

2. “Surfing soothes me, it’s always been a kind of Zen experience for me. The ocean is so magnificent, peaceful, and awesome. The rest of the world disappears for me when I’m on a wave.”

3. “I fell in love with the ocean when I was just a little kid, four or five years old, I was a junior ranger, I was going out and doing intertidal stuff, walking around and sticking my finger in my first sea anemone and picking up starfish and all that. It gripped me when I was young.”

4. “I’m a science guy. I’m a geek. I love geology and botany and marine science. I thought maybe I’d be a professional guide, or maybe even a park ranger, working for the Department of Fish and Game.”

5. “I love long-range rifle shooting. I like anything that deals with precision. I also find that with archery. On my ranch, I have my own range with 3-D targets of animals and hay bales from different distances.”

6. “I sometimes struggle, because my job is like the antithesis of what surfing is all about. Surfing’s simple. It’s real.” 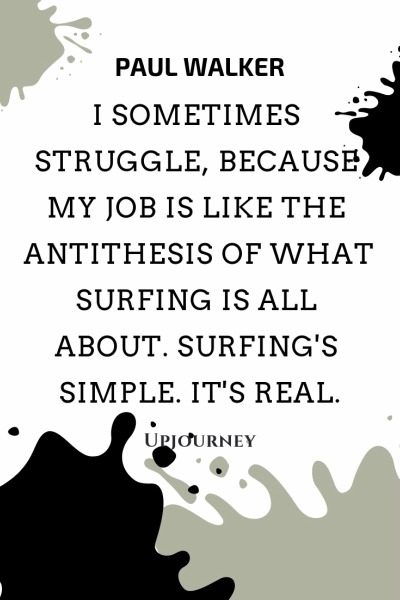 7. “I’m a pretty agile guy, especially being taller and having done martial arts from about the age of 13, but parkour is one of those sports that I wish I’d discovered sooner. When my nephew first showed me, I thought, Damn – I’m too old for this.”

8. “Surfing big waves is not an extreme sport to me. I fall off, tumble down, and come up. My heart’s racing because I’m thinking I almost drowned, and I thank God I can breathe again, but I always think, ‘What am I hitting?’ Water.”

1. “As for Hollywood, I’ve got a killer job, and I’m having a blast. I have the luxury to go on trips whenever I want and invite my friends who can’t afford it. And, God willing, I’ll be able to do all that till the day I die.”

2. “I have friends that are super talented, that are far more talented than I am in certain areas, but it just doesn’t happen for them. Sometimes you feel guilty for your success because you know people who deserve it way more.”

5. “My parents never looked at my acting as a career. They saw it as a way to help provide for the household.”

6. “I almost sabotaged my career. ‘The Fast and the Furious’ didn’t let me, and I’m grateful now. That franchise gave me the opportunity.”

7. “That’s one thing about Hollywood. People don’t always want what’s real. People always want a little more. So for me, it’s a compromise. Here you go, that hyper-reality.”

8. “It’s not about working anymore, it is about doing work I can be proud of.” 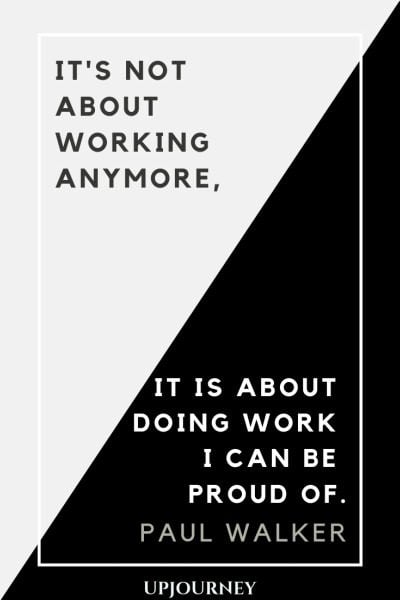 9. “I just turned 40, and it’s weird to think that I’ve been doing this almost my whole life. I was a child actor and then didn’t do it through junior high and high school, then started up again in my late teens doing ‘Young and the Restless.’ Dabbled with school, went back to college, played around. I think I was doing Pleasantville at 23.”

1. “One game that drives me crazy, is when a guy gives the girl they really like more attention, and then they feel like maybe they pressed too hard, so they back way off and start giving other women attention. I’ve never pulled this myself.”

2. “I like a woman that’s capable and at the same time feminine. I admire tomboy qualities but with a feminine touch.”

3. “I’m a problem solver. I love people. The more complicated they are, the more I get into them, and I just want to understand what makes them tick.”

4. “There are a time and place for everything, but as I get older, I like finding those human moments and really connecting. Maybe I’m not as cool as I once was.”

5. “You know, all that really matters is that the people you love are happy and healthy. Everything else is just sprinkling on the sundae.” 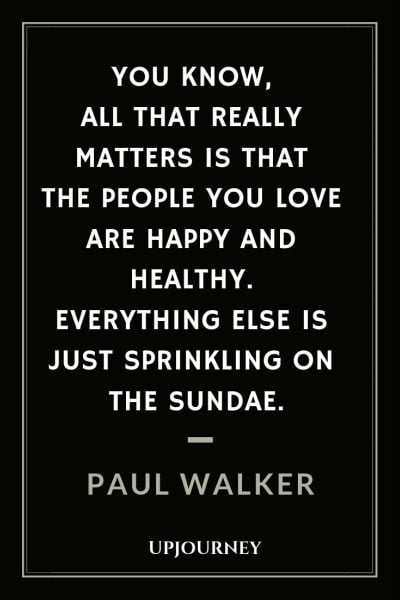 6. “I think my mom put it best. She said, Little girls, soften their daddy’s hearts.”

7. “I used to believe in one true soul mate, but not anymore. I believe you can have a few.”

1. “I love ‘Donnie Brasco’ and ‘Days of Thunder,’ so after I did ‘The Skulls,’ I was like, ‘I want to be either an undercover cop, or I want to race cars!’ Universal came to me with a newspaper article about street racing in L.A., and I was like, ‘Are you kidding me? I grew up doing that right off Peoria in Sun Valley.’ They asked if I wanted to do it.” 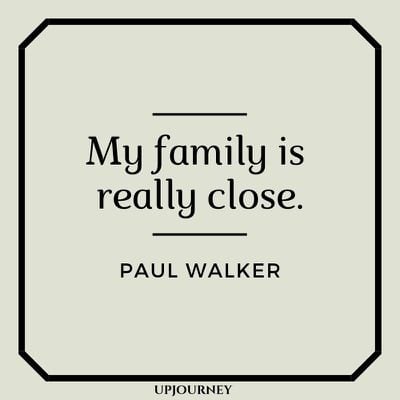 3. “I wish I could be behind the wheel for every stunt.”

4. “I’m a doer, and whether it was the tsunami in Sri Lanka or the earthquake in Indonesia, I was always saying, I should be there; I should be helping out.”

8. “I’m not affected by violence the way some people are. I don’t know why, but I enjoy that intensity.”

9. “I could take you for a walk on the beach and I could point out just about any creature and give you their Latin names.”

10. “The Fast is tough; it’s not easy. It represents too much to too many people. But that’s what also makes it fun.”

12. “In college, my friends called me Mr. James Bond 007 because I entertained everything: blonds, brunettes, redheads. I’m across the board.”

14. “I have a way of just being ice and just cooling situations and making things work.”

15. “The mornings along the coast where the fog and must meet with the salty spray of the seas is one of my favorite smells. I love the smell in the evergreen forest just after it rains – The Redwood Forest in California has the coast, too, so you have the best of everything!”

16. “I’m not the least bit polished, I come from a blue-collar background and I never thought I could feel comfortable around the English.”

18. “When I was younger, I was so damn pretty, I looked like a girl, so I understand why guys didn’t like me.” 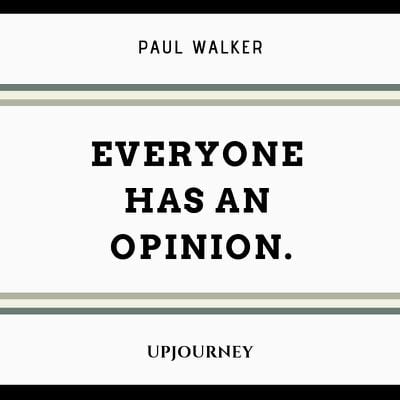 20. “I’m not the kind of guy who’s taking advantage of my position.”

22. “My mom was always really healthy and cautious about her diet, so I’m not a big sugar guy.”

24. “Me and my buddies are all like brothers. So it’s okay for us to say ‘I love you’ or whatever. It’s always cool. I think that comes from my dad. That’s just the way he always was.”

26. “I remember when I first came around, the computer-generated stuff was pretty wicked. I was like, ‘Wow!’ but I feel like then for the longest time, we saw so much of it, after a while, you might as well just be watching an animated movie.” 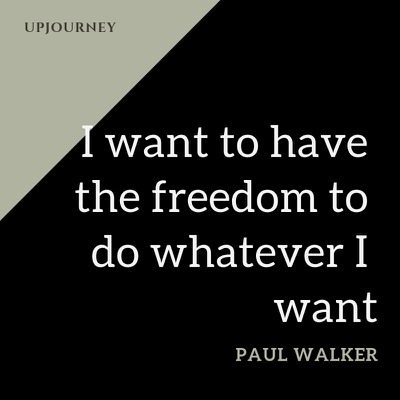 29. “I don’t think of myself as a romantic person; I’m kind of more rough and tumble, I think. The things I’m drawn to are outdoorsy, I only get dressed up when I have to. I’m drawn to women who are into the same type of thing. If you’re going to call it romantic, I’m very spontaneous. That’s probably the best thing I have going for me.”

30. “I look at people in certain circumstances, and I fall into caretaker mode real quick, real easy. I like to shoulder people up and carry them along, and then I end up creating some kind of dependency. I enable. It’s really, really hard for me.”

We hope you enjoyed this collection of the most inspirational quotes and sayings by the amazing actor and silent philanthropist—Paul Walker.