Paulo Freire was a Brazilian educator, philosopher, and theorist who wrote several notable books on education and society. Though he’s mostly known for the radical theories he advanced in his works, Freire spent much of his adulthood leading literacy campaigns in Brazil.

His work, Pedagogy of the Oppressed, is considered as one of the foundational texts of the critical pedagogy movement.

Because of his contributions in education, Freire received awards and honors such as the King Baudouin International Development Prize 1980 and the UNESCO Prize for Peace Education in 1986. His thought and work are primarily influenced by other prominent philosophers like Karl Marx, G.W.F. Hegel, and Anísio Teixeira, among others.

We have listed some of the most memorable and impactful Paulo Freire quotes about education, learning, social justice, and others.

2. “It is not systematic education which somehow molds society, but, on the contrary, society which, according to its particular structure, shapes education in relation to the ends and interests of those who control the power in that society.”

3. “Liberating education consists in acts of cognition, not transferals of information.” 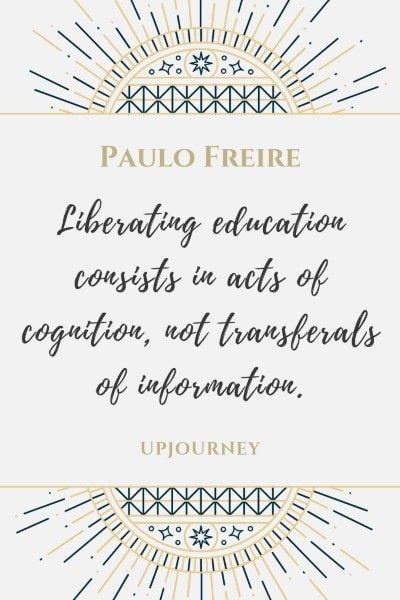 5. “Education must begin with the solution of the student-teacher contradiction, by reconciling the poles of the contradiction so that both are simultaneously teachers and students.”

6. “Every society needs to examine itself in relation to other societies.”

1. “Those truly committed to liberation must reject the banking concept in its entirety, adopting instead a concept of women and men as conscious beings and consciousness as consciousness intent upon the world.”

2. “It is absolutely essential that the oppressed participate in the revolutionary process with an increasingly critical awareness of their role as subjects of the transformation.”

3. “Critical and liberating dialogue, which presupposes action, must be carried on with the oppressed at whatever the stage of their struggle for liberation. The content of that dialogue can and should vary in accordance with historical conditions and the level at which the oppressed perceive reality.”

4. “I am an educator who thinks globally.” 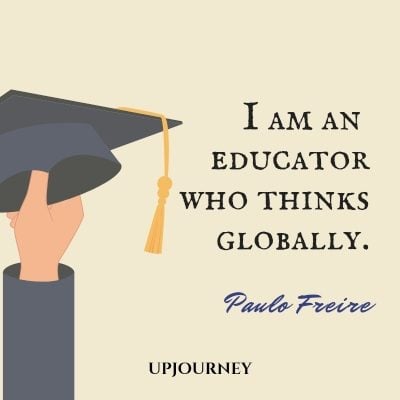 5. “Manipulation, sloganizing, depositing, regimentation, and prescription cannot be components of revolutionary praxis, precisely because they are the components of the praxis of domination.”

7. “Revolution is born as a social entity within the oppressor society.”

8. “Washing one’s hands of the conflict between the powerful and the powerless means to side with the powerful, not to be neutral.”

9. “It’s no sin to make a critical study of Brazil’s reality. A small percentage own land. Most people don’t.”

10. “At a certain point in their existential experience, the oppressed feel an irresistible attraction toward the oppressor and his way of life. Sharing this way of life becomes an overpowering aspiration.”

11. “The oppressed, having internalized the image of the oppressor and adopted his guidelines, are fearful of freedom.” 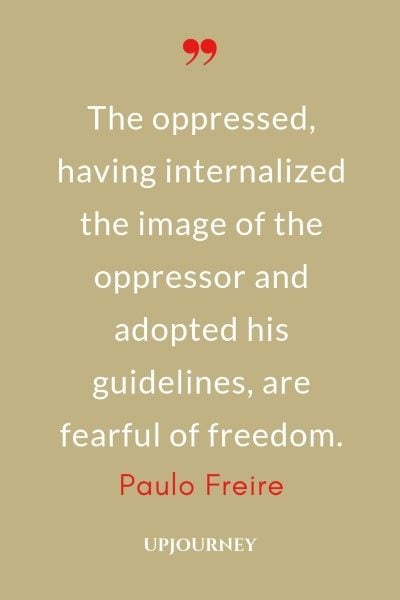 12. “At times, I have been criticized by some philosophers of education, who place me in postures that they classify pejoratively as ‘revolutionary.’ But I have had the satisfaction of being invited to work in societies making progressive efforts without wavering. They were changing, and so they called on me.”

13. “How can the oppressed, as divided, unauthentic beings, participate in developing the pedagogy of their liberation?”

If you’d like to know more about the works and writings of Paulo Freire, we suggest you read his most influential work, Pedagogy of the Oppressed.