Being alone isn’t always a bad thing, even if some people think so. A few of the most common assumptions people have when you’re alone is that either you’re anti-social or unwanted. Sometimes, both.

In actuality, being your companion can be right for you. Sure, having healthy relationships with people you care about is fulfilling. But so is spending time with yourself.

Having the occasional “me” time might even help you grow as a person and recharge for the days ahead.

Find peace in the silence of solitude as you read through some of the best quotes and sayings about being alone.

1. “As I get older I’m more and more comfortable being alone.” — Sienna Miller

2. “I have an internal protectiveness where it’s like, if it comes to just me, as frightened as I am of losing someone I love or things going sour or simply being alone, there is a dark place in my brain where I’m like, It could happen and I’m okay, I’m prepared.” — Lena Headey

3. “I’ve always had a huge fear of dying or becoming ill. The thing I’m most afraid of, though, is being alone, which I think a lot of performers fear. It’s why we seek the limelight – so we’re not alone, were adored. We’re loved, so people want to be around us. The fear of being alone drives my life.” — Jennifer Lopez

4. “The most terrifying thing I can think of is being alone – and I mean utterly alone, like no one else in the world alone – at night. That’s the nucleus of the first story in my collection and it’s also where the title came from for the book.” — Paul Kane

5. “All men’s misfortunes spring from their hatred of being alone.” — Jean de la Bruyere 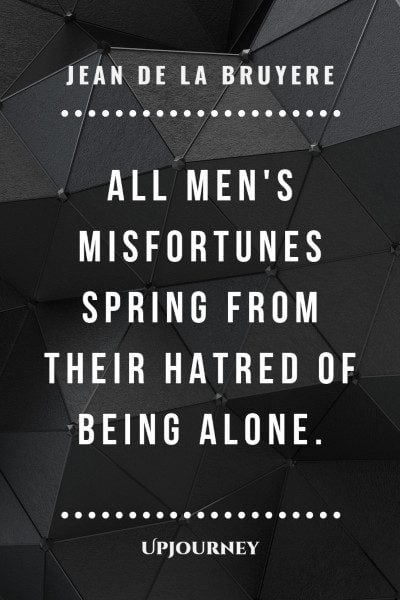 6. “Weird people follow you in the streets, you can’t sit alone in a restaurant or a cafe and read a book in peace, and I think everybody values those moments of being alone.” — Winona Ryder

7. “I like being alone and I think this movie, as much as it is an investigation of connection and people bonding, I also think it’s just as much about loneliness.” — Jason Schwartzman

8. “Another thing I like to do is sit back and take in nature. To look at the birds, listen to their singing, go hiking, camping and jogging and running, walking along the beach, playing games and sometimes being alone with the great outdoors. It’s very special to me.” — Larry Wilcox

9. “Getting through the nights is the toughest part. Being alone. Not having her there to talk to.” — Stuart Appleby

12. “I’m fascinated with myself and love hearing the sound of my own voice. I’d like to hear what I have to say. A lot of people don’t like being alone because they truly don’t like themselves, but I love me.” — Gene Simmons

13. “I’ve always had better luck learning things on my own. And I really love the challenge of doing it yourself and kind of being alone against the system.” — Oren Peli

14. “I have a huge, active imagination, and I think I’m really scared of being alone; because if I’m left to my own devices, I’ll just turn into a madwoman.” — Claire Danes

15. “What a lovely surprise to finally discover how unlonely being alone can be.” — Ellen Burstyn 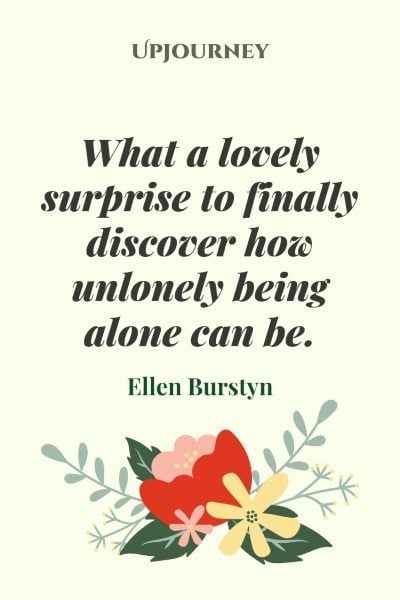 16. “People used what they called a telephone because they hated being close together and they were scared of being alone.” — Chuck Palahniuk

18. “I finally faced the fact that it isn’t a crime not having friends. Being alone means you have fewer problems.” — Whitney Houston

20. “There’s a tremendous difference between alone and lonely. You could be lonely in a group of people. I like being alone. I like eating by myself. I go home at night and just watch a movie or hang out with my dog. I have to exert myself and really say, oh God, I’ve got to see my friends ’cause I’m too content being by myself.” — Drew Barrymore

21. “My favorite hobby is being alone. I like to be alone. I also like dancing, fishing, playing poker sometimes and vegetable gardening – corn, tomatoes, cucumbers, I have a big garden every year.” — Emanuel Steward

22. “And I find – I’m 63, and my capacity to be by myself and just spend time by myself hasn’t diminished any. That’s the necessary part of being a writer, you better like being alone.” — John Irving

23. “Being alone is scarier than any boogey man and the reason why I don’t choose to see Horror movies as a rule.” — Tom Sizemore 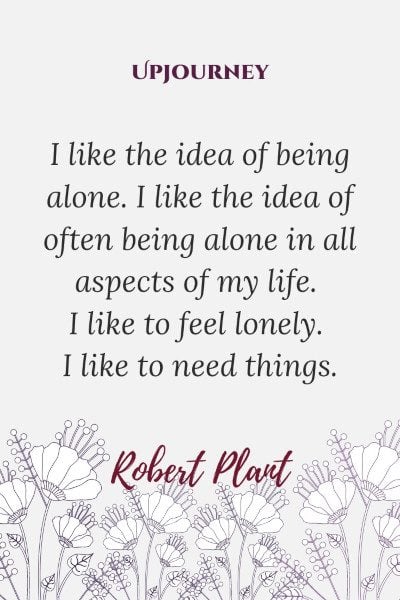 26. “I mean one of the things about being alone is that you’ve no people to define yourself off, I mean, people are like all-round mirrors, because let’s face it, we don’t often see ourselves all round in a mirror anyway, do we.” — Diana Wynne Jones

27. “You could say, in a vulgar Freudian way, that I am the unhappy child who escapes into books. Even as a child, I was most happy being alone. This has not changed.” — Slavoj Zizek

29. “I had a very happy childhood, but I wasn’t that happy a child. I liked being alone and creating characters and voices. I think that’s when your creativity is developed, when you’re young. I liked the world of the imagination because it was an easy place to go to.” — David Walliams

31. “Loneliness is my least favorite thing about life. The thing that I’m most worried about is just being alone without anybody to care for or someone who will care for me.” — Anne Hathaway

32. “I’m learning a lot about myself being alone, and doing what I’m doing.” — Chantal Kreviazuk

34. “I’m so accustomed to being alone.” — Leighton Meester

35. “Being solitary is being alone well: being alone luxuriously immersed in doings of your own choice, aware of the fullness of your won presence rather than of the absence of others. Because solitude is an achievement.” — Alice Koller 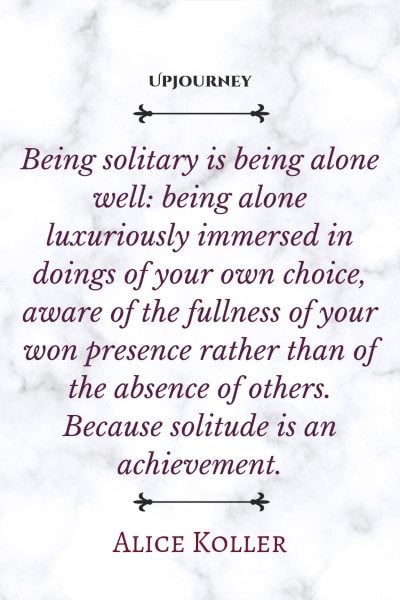 36. “It’s an interesting combination: Having a great fear of being alone, and having a desperate need for solitude and the solitary experience. That’s always been a tug of war for me.” — Jodie Foster

37. “The Jew does not wish to be isolated. He fears being alone, without allies.” — Meir Kahane

38. “Music should probably provide answers in terms of lyrical content, and giving people a sense of togetherness and oneness, as opposed to being alone in their thoughts and dilemmas or regrets or happiness or whatever.” — Peabo Bryson

39. “Autobiography begins with a sense of being alone. It is an orphan form.” — John Berger

40. “Alone let him constantly meditate in solitude on that which is salutary for his soul, for he who meditates in solitude attains supreme bliss.” — Guru Nanak

41. “The best part about being alone is that you really don’t have to answer to anybody. You do what you want.” — Justin Timberlake

42. “I absolutely relate to being alone in squalor, trying to come up with something adequate. I relate to that, and I’ve been known to crawl out of bed and drink out of a 2-liter bottle of Diet Coke.” — Diablo Cody

43. “The primary distinction of the artist is that he must actively cultivate that state which most men, necessarily, must avoid the state of being alone.” — James Baldwin

44. “The older I grow, the more I find myself alone.” — Alberto Giacometti 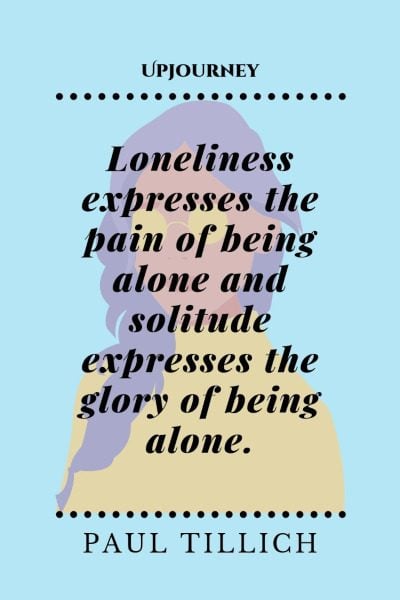