Sir Richard Charles Nicholas Branson, is an author, investor, and philanthropist. Aside from being an entrepreneur and business magnate, he is also the founder and chairman of Virginia Group (which controls more than 400 companies worldwide).

Although he has dyslexia and had poor academic performance, Branson already revealed his ambition and desire to become an entrepreneur at such a young age. Fortunately, his parents were also supportive of his business endeavors.

At the age of 16, Branson started a youth culture magazine called “Student,” and it proved to be a success. In 1972, he started a chain of record stores called Virgin Records. During the 1980s, Branson’s Virgin brand rapidly grew, and it went uphill from there on. Today, Virgin Group operates more than 400 companies in 30 different countries and is still continually expanding.

Branson has become a prominent global figure for his work in retail, transport, and music, for his humanitarian work, as well as his taste for adventure. He was also knighted at Buckingham Palace for “services to entrepreneurship” in March 2000.

Listed below are some of the most notable Richard Branson quotes and sayings that reveal his thoughts and views regarding life, business, leadership, success, and more.

1. “An important priority for me is a business must get their own house in order. Be or become an agent of positive change in your own enterprise and adopt responsible practices to eliminate the risks that often lie at the root of inequality and poverty.”

2. “To me, business isn’t about wearing suits or pleasing stockholders. It’s about being true to yourself, your ideas and focusing on the essentials.”

3. “A business has to be involving, it has to be fun, and it has to exercise your creative instincts.” 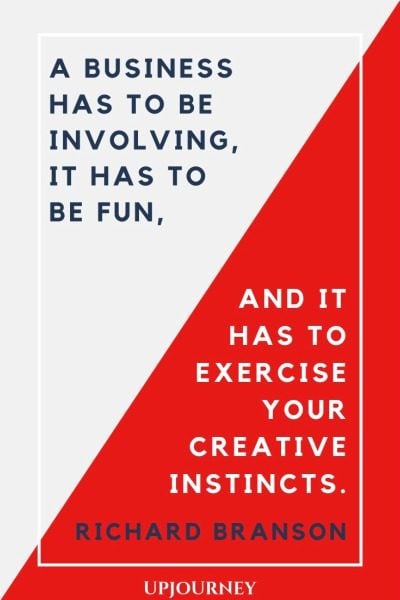 4. “Can you imagine what a different world we will live in when businesses do what’s right for the communities and the environment in everything they do?”

6. “More businesses should be following Apple’s stance in encouraging more investment in sustainability.”

7. “Business opportunities are like buses, there’s always another one coming.”

8. “In business, if you realize you’ve made a bad decision, you change it.”

9. “One thing is certain in business. You and everyone around you will make mistakes.” 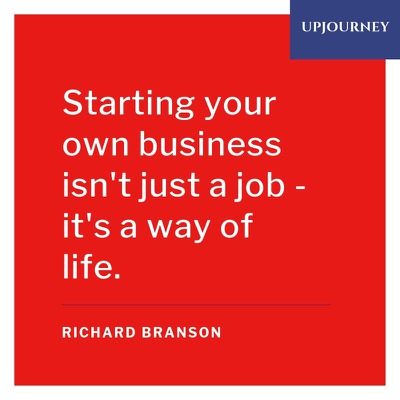 12. “From my very first day as an entrepreneur, I’ve felt the only mission worth pursuing in business is to make people’s lives better.”

1. “A passionate belief in your business and personal objectives can make all the difference between success and failure. If you aren’t proud of what you’re doing, why should anybody else be?”

2. “My interest in life comes from setting myself huge, apparently unachievable challenges and trying to rise above them.”

3. “Fun is one of the most important – and underrated – ingredients in any successful venture. If you’re not having fun, then it’s probably time to call it quits and try something else.”

5. “Well, I think that there’s a very thin dividing line between success and failure. And I think if you start a business without financial backing, you’re likely to go the wrong side of that dividing line.”

6. “Too many people measure how successful they are by how much money they make or the people that they associate with. In my opinion, true success should be measured by how happy you are.”

7. “Do not be embarrassed by your failures, learn from them and start again.” 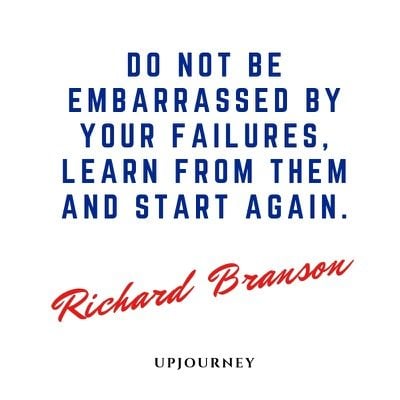 8. “Overcoming fear is the first step to success for entrepreneurs. The winners all exemplify that, and the hard work and commitment they have shown underline what is needed to set up a business.”

9. “Treat failure as a lesson on how not to approach achieving a goal, and then use that learning to improve your chances of success when you try again. Failure is only the end if you decide to stop.”

1. “You don’t learn to walk by following rules. You learn by doing, and by falling over.”

2. “A good leader doesn’t get stuck behind a desk.” 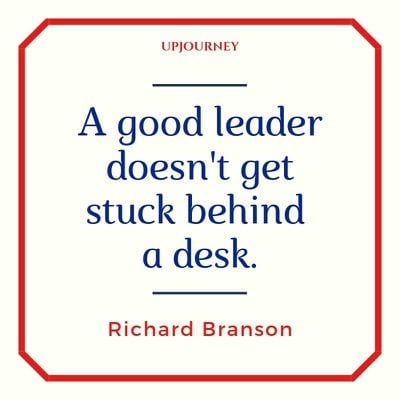 3. “For a successful entrepreneur it can mean extreme wealth. But with extreme wealth comes extreme responsibility. And the responsibility for me is to invest in creating new businesses, create jobs, employ people, and to put money aside to tackle issues where we can make a difference.”

4. “If you want to be more productive, then start at the start: get there on time. Whether it is a meeting, a flight, an appointment or a date, it’s important to ensure you are there when you say you will be there. This may feel like an old-fashioned tip to give, but it has served me well for five decades in business.”

5. “Being a good listener is absolutely critical to being a good leader; you have to listen to the people who are on the front line.”

2. “Through the right people focusing on the right things, we can, in time, get on top of a lot if not most of the problems of this world. And that’s what a number of us are trying to do.”

3. “From a young age, I learned to focus on the things I was good at and delegate to others what I was not good at. That’s how Virgin is run. Fantastic people throughout the Virgin Group run our businesses, allowing me to think creatively and strategically.”

4. “The art of delegation is one of the key skills any entrepreneur must master.” 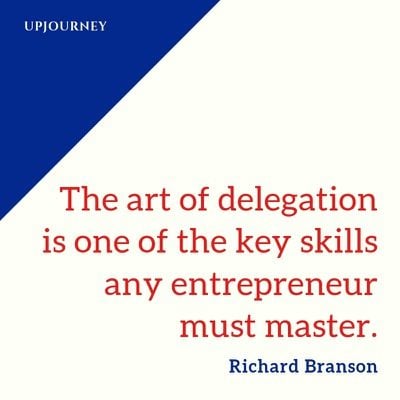 1. “I’ve been very passionate about renewable energy for many years, particularly solar energy and it’s capacity to bring abundant clean, sustainable energy to millions around the globe.”

2. “The balloons only have one life and the only way of finding out whether they work is to attempt to fly around the world.”

3. “Taking bold action on climate change simply makes good business sense. It’s also the right thing to do for people and the planet. Setting a net-zero GHG emissions target by 2050 will drive innovation, grow jobs, build prosperity, and secure a better world for what will soon be 9 billion people.”

4. “I read everything, but generally more fact than fiction – especially autobiographies and biographies. I’ve read ‘Long Walk to Freedom’ by Nelson Mandela at least twice on holiday. Every time, I’m totally awed by his vision, strength, and forgiveness. I feel honored to have got to know him and his wonderful wife Graca over the years.”

5. “There’s an inherent danger in letting people think that they have perfected something. When they believe they’ve ‘nailed it,’ most people tend to sit back and rest on their laurels while countless others will be laboring furiously to better their work!”

6. “The jet stream is a very strong force and pushing a balloon into it is like pushing up against a brick wall, but once we got into it, we found that, remarkably, the balloon went whatever speed the wind went.”

7. “My general attitude to life is to enjoy every minute of every day. I never do anything with a feeling of, Oh God, I’ve got to do this today.”

8. “Ridiculous yachts and private planes and big limousines won’t make people enjoy life more, and it sends out terrible messages to the people who work for them. It would be so much better if that money was spent in Africa – and it’s about getting a balance.”

9. “My attitude has always been, if you fall flat on your face, at least you’re moving forward. All you have to do is get back up and try again.” 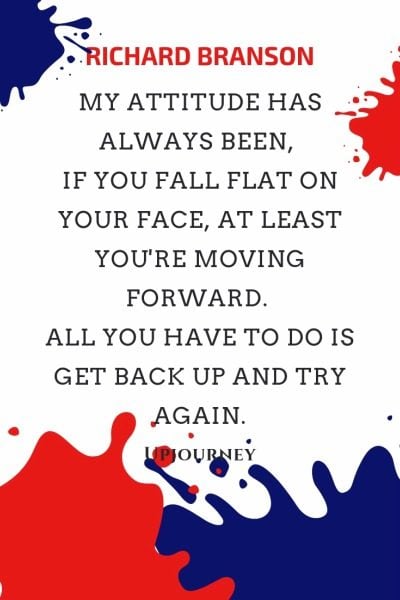 10. “We have one planet in our solar system that’s habitable, and that’s the Earth, and space travel can transform things back here for the better. First of all, by just having people go to space and look back on this fragile planet we live on. People have come back transformed and have done fantastic things.”

11. “A complaint is a chance to turn a customer into a lifelong friend. I say that seriously, not as some press release baloney.”

12. “Material things are delightful, but they’re not important.”

13. “Had I pursued my education long enough to learn all the conventional dos and don’ts of starting a business, I often wonder how different my life and career might have been.”

14. “When Brexiters told the public that people were exaggerating, that there would be a financial meltdown, I think it’s been proven that they were not exaggerating.”

15. “My philosophy is that if I have any money I invest it in new ventures and not have it sitting around.” 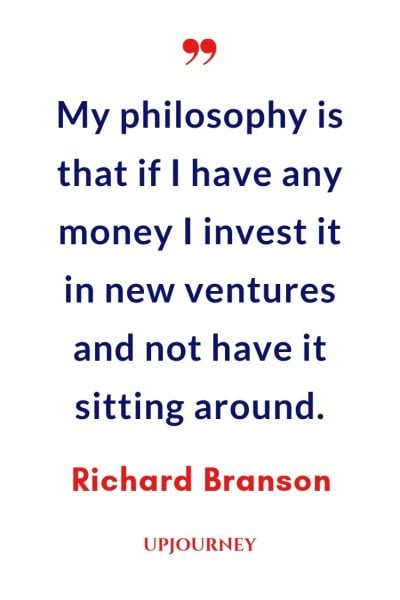 16. “I was dyslexic, I had no understanding of schoolwork whatsoever. I certainly would have failed IQ tests. And it was one of the reasons I left school when I was 15 years old. And if I – if I’m not interested in something, I don’t grasp it.”

17. “You should not build your customer service system on the premise that your organization will never question the whims of your clients.”

18. “As a father and now a grandfather to three wonderful grandchildren, I know how magical the first year of a child’s life is but also how much hard work it takes. Being able to spend as much time as possible with your loved ones is absolutely vital, especially early on.”

19. “I don’t think so, in that Virgin is already a global brand. Brands like Amazon have had to spend hundreds of millions of pounds you know, building their brands, whereas Virgin is already well-known around the world.”

21. “Well, the odds must be against anybody being able to fly around the world in a balloon on the first attempt. All of us who are attempting to go around the world in balloons are effectively flying in experimental craft because these crafts cannot be tested.”

22. “It’s a common misconception that money is every entrepreneur’s metric for success. It’s not, and nor should it be.”

23. “I love traveling full stop – so while I’ve had some harrowing instances, I never look at them negatively. Memories are made when you’re traveling – not when you’re chained to your desk.”

24. “When I was a kid, I had a tendency to criticize. But when I did, my mum would whisk me off to the bathroom to stand in front of a mirror. Ten minutes, never less. To think about how criticism is a poor reflection on the one who criticizes.”

25. “If you want to be a Millionaire, start with a billion dollars and launch a new airline.” 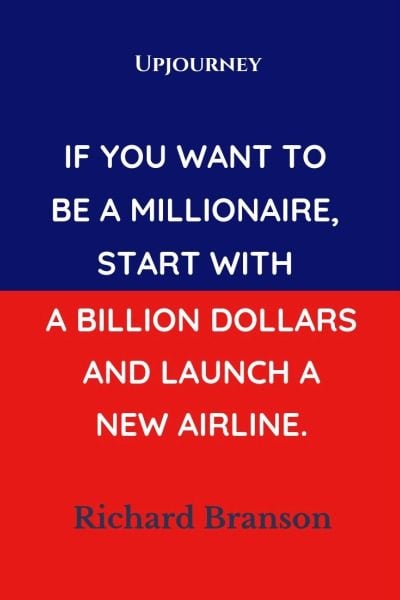 26. “When I was four, my mother insisted I get out of the car and find my own way home. Although I got lost, I did find my way home. It taught me the value of independence at an early age.”

27. “We’re introducing separate rooms with double beds in all of our planes so people can actually go with their partner and have a proper night’s sleep.”

28. “Those who know me know I’m passionate about lists, and top of my list of priorities is my family. My wife Joan and I do not consider our legacy to our children to be wealth or fame but the opportunity to pursue happiness by following their own path.”

29. “Back when I was in school, few people understood dyslexia and what to do for it. My teachers thought I was lazy and not very clever, and I got bored easily… thinking of all the things I could do once I left school. I couldn’t always follow what was going on.”

If you would like to learn more about the life of Richard Branson, we would suggest you read his book, Losing My Virginity: How I Survived, Had Fun, and Made a Fortune Doing Business My Way.