Rodney Dangerfield was an American stand-up comedian, voice and screen actor, producer, musician, screenwriter, and author. He was best known for his self-deprecating humor, one-liners, and monologues of the same theme.

Born in 1921, Dangerfield was the son of Phillip and Dorothy Cohen. He grew up in Suffolk County, Long Island, New York. Dangerfield went to Richmond Hill High School and graduated in 1939. He took on different jobs from delivering newspapers to selling ice cream to help support his family after his father abandoned them.

Dangerfield began his comedy career in the Borscht Belt resort in New York City. As he became more famous in the 60s and 70s, Dangerfield became a headline act in many Las Vegas casinos. And in 1971, Dangerfield first appeared onscreen in the movie The Projectionist. However, his acting career peaked in the 80s when he appeared in hit comedy movies.

In 2004, Dangerfield died after several weeks in a coma after a cardiac arrest. Yet until today, his legacy lives on, and many famous comedians like Jay Leno credit Dangerfield for popularizing his comic style.

We have collected some of the most hilarious Rodney Dangerfield quotes and sayings that demonstrate his very own humor, which has made millions of people laugh.

1. “My wife met me at the door the other night in a sexy negligee. Unfortunately, she was just coming home.”

2. “I told my dentist my teeth are going yellow. he told me to wear a brown tie.” 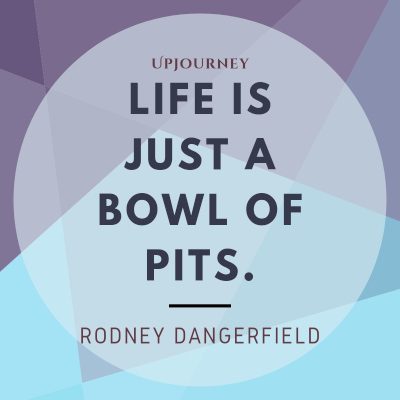 4. “Some dog I got too. We call him Egypt. Because in every room he leaves a pyramid.”

5. “I looked up my family tree and found three dogs using it.”

6. “I could tell my parents hated me. My bath toys were a toaster and a radio.”

7. “Acting deals with very delicate emotions. It is not putting up a mask. Each time an actor acts he does not hide he exposes himself.”

8. “It’s tough to stay married. My wife kisses the dog on the lips, yet she won’t drink from my glass.”

9. “My wife wants sex in the back of the car and she wants me to drive.”

10. “I told my psychiatrist that everyone hates me. He said I was being ridiculous – everyone hasn’t met me yet.”

11. “I’m at the age where food has taken the place of sex in my life. In fact, I’ve just had a mirror put over my kitchen table.”

13. “My mother never breast fed me, she told me she only liked me as a friend.” 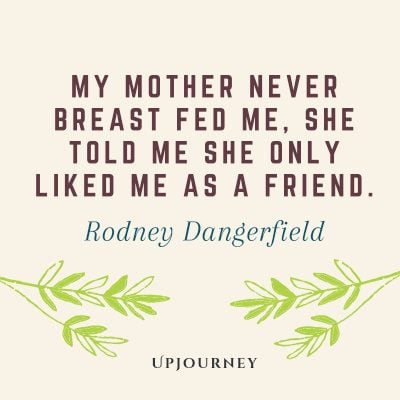 14. “My cousins gay, he went to London only to find out that Big Ben was a clock.”

15. “I came from a real tough neighborhood. I put my hand in some cement and felt another hand.”

16. “I met the surgeon general – he offered me a cigarette.”

17. “When I played in the sandbox, the cat kept covering me up.”

19. “I found there was only one way to look thin: hang out with fat people.”

21. “My father carries around the picture of the kid who came with his wallet.”

23. “I remember the time I was kidnapped and they sent a piece of my finger to my father. He said he wanted more proof.” 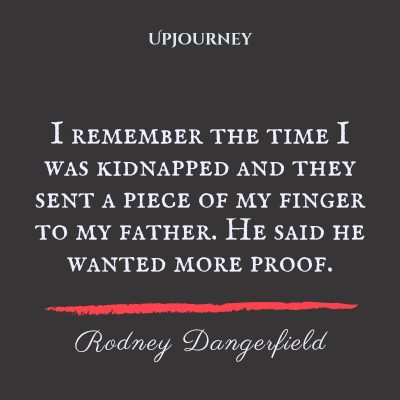 24. “My mother had morning sickness after I was born.”

29. “Most of the arguments to which I am party fall somewhat short of being impressive, knowing to the fact that neither I nor my opponent knows what we are talking about.”

31. “Acting deals with very delicate emotions. It is not putting up a mask. Each time an actor acts he does not hide; he exposes himself.”

32. “We sleep in separate rooms, we have dinner apart, we take separate vacations – we’re doing everything we can to keep our marriage together.”

33. “My wife’s jealousy is getting ridiculous. The other day she looked at my calendar and wanted to know who May was.” 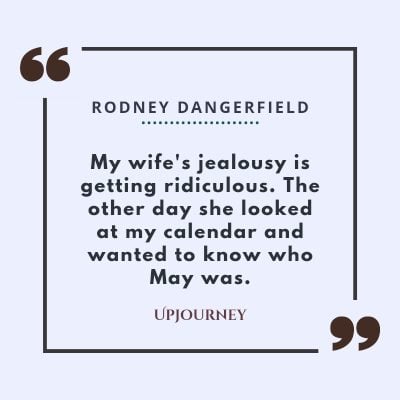 34. “My marriage is on the rocks again, yeah, my wife just broke up with her boyfriend.”

35. “I worked in a pet store and people would ask how big I would get.”

36. “On Halloween, the parents sent their kids out looking like me.”

37. “Men who do things without being told draw the most wages.”

38. “My wife can’t cook at all. She made chocolate mousse. An antler got stuck in my throat.”

40. “This morning when I put on my underwear I could hear the fruit-of-the-loom guys laughing at me.”

41. “I had plenty of pimples as a kid. One day I fell asleep in the library. When I woke up, a blind man was reading my face.”

42. “My wife is always trying to get rid of me. The other day she told me to put the garbage out. I said to her I already did. She told me to go and keep an eye on it.”

43. “I get no respect. The way my luck is running, if I was a politician I would be honest.” 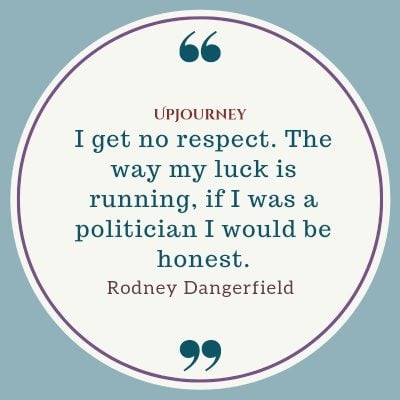 44. “My psychiatrist told me I was crazy and I said I want a second opinion. He said okay, you’re ugly too.”

46. “What a kid I got, I told him about the birds and the bee and he told me about the butcher and my wife.”

47. “With my wife I don’t get no respect. I made a toast on her birthday to ‘the best woman a man ever had.’ The waiter joined me.”

48. “I have good looking kids. Thank goodness my wife cheats on me.” 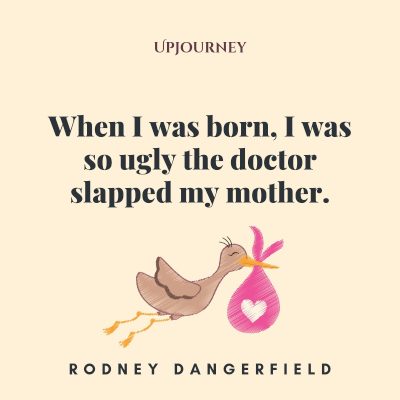 If you’d like to know more about Rodney Dangerfield, we suggest you read his autobiography, It’s Not Easy Bein’ Me: A Lifetime of No Respect but Plenty of Sex and Drugs.