Rosa Parks was a civil rights activist best known for her refusal to surrender her seat to a white passenger on a bus on her way home in Montgomery, Alabama.

Born in 1913, Parks was the daughter of James and Leona McCauley. As a young child, Parks experienced discrimination for the color of her skin. Instead of ignoring her bullies, she often fought back, saying she could never accept physical abuse without retaliation.

She married Raymond Parks in 1932. He worked as a barber in Montgomery, while Parks had different jobs from domestic worker to hospital aide. Both of them were members of the NAACP or the National Association for the Advancement of Colored People. Parks worked as the organization’s secretary.

On December 1, 1955, Parks boarded a bus home and sat on the front row seat in the section reserved for black people. As the bus went along its route, the white part filled up. The bus driver James F. Blake demanded that Parks and three other colored passengers move to the rear seats. Parks refused and was then arrested.

A few days later, the Montgomery bus boycott started. The black community rode in carpools, took black-operated cabs, and some even walked home. The boycott lasted for 381 days until the bus segregation bill was repealed.

Due to their participation in the Civil Rights Movement, both Parks and her husband lost their jobs. They moved to Detroit, where they lived the remainder of their years. Parks co-founded the Rosa and Raymond Parks Institute for Self Development, an organization that conducts the “Pathways to Freedom” bus tours that educate the youth about civil rights.

In 1999, Parks received the Congressional Gold Medal. In the same year, Time named her as one of the most influential figures in the 20th century.

Find the courage to fight for your right through some of the famous and inspirational Rosa Parks quotes and sayings.

1. “I have been refused entrance on the buses because I would not pay my fare at the front and go around to the rear door to enter. That was the custom if the bus was crowded up to the point where the white passengers would start occupying.”

2. “I don’t think well of people who are prejudiced against people because of race. The only way for prejudiced people to change is for them to decide for themselves that all human beings should be treated fairly. We can’t force them to think that way.” 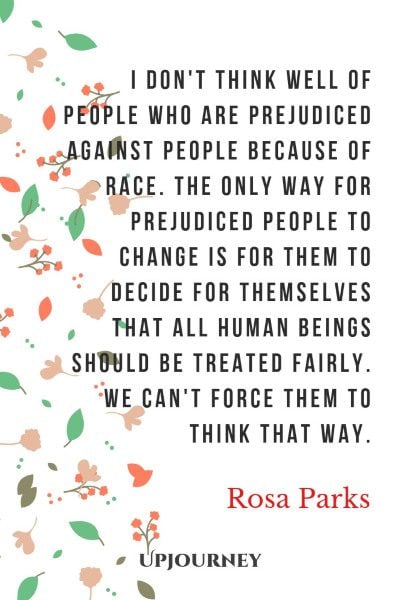 3. “I have never been what you would call just an integrationist. I know I’ve been called that… Integrating that bus wouldn’t mean more equality. Even when there was segregation, there was plenty of integration in the South, but it was for the benefit and convenience of the white person, not us.”

4. “In it not easy to remain rational and normal mentally in such a setting where, even in our airport in Montgomery, there is a white waiting room… There are restroom facilities for white ladies and colored women, white men and colored men. We stand outside after being served at the same ticket counter instead of sitting on the inside.”

5. “Whatever my individual desires were to be free, I was not alone. There were many others who felt the same way.”

6. “All I was doing was trying to get home from work.”

7. “People always say that I didn’t give up my seat because I was tired, but that isn’t true. I was not tired physically… No, the only tired I was, was tired of giving in.”

8. “Racism is still with us. But it is up to us to prepare our children for what they have to meet, and, hopefully, we shall overcome.”

9. “I’m tired of being treated like a second-class citizen.”

10. “The Rosa and Raymond Parks Institute accepts people of any race. We don’t discriminate against anyone. We teach people to reach their highest potential. I set examples by the way I lead my life.”

11. “Let us look at Jim Crow for the criminal he is and what he has done to one life multiplied millions of times over these United States and the world. He walks us on a tightrope from birth.”

12. “Have you ever been hurt and the place tries to heal a bit, and you just pull the scar off of it over and over again.” 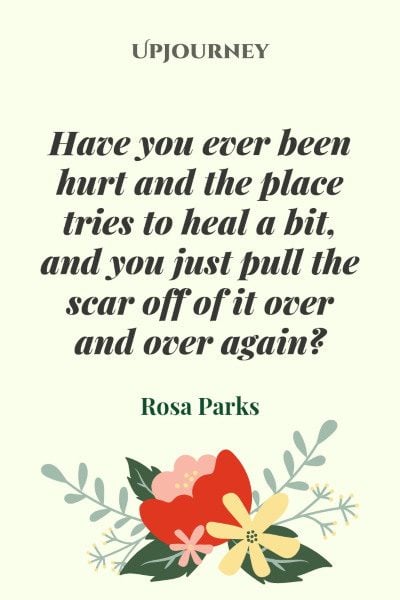 14. “At the time I was arrested I had no idea it would turn into this. It was just a day like any other day. The only thing that made it significant was that the masses of the people joined in.”

15. “I have learned over the years that when one’s mind is made up, this diminishes fear knowing what must be done does away with fear.”

16. “I would like to be remembered as a person who wanted to be free… so other people would be also free.”

17. “I have learned over the years that when one’s mind is made up, this diminishes fear; knowing what must be done does away with fear.”

18. “Time begins the healing process of wounds cut deeply by oppression. We soothe ourselves with the salve of attempted indifference, accepting the false pattern set up by the horrible restriction of Jim Crow laws.”

19. “It was not pre-arranged. It just happened that the driver made a demand and I just didn’t feel like obeying his demand. I was quite tired after spending a full day working.”

20. “Each person must live their life as a model for others.”

21. “I had felt for a long time that, if I was ever told to get up so a white person could sit, that I would refuse to do so.”

22. “There is just so much hurt, disappointment, and oppression one can take… The line between reason and madness grows thinner.” 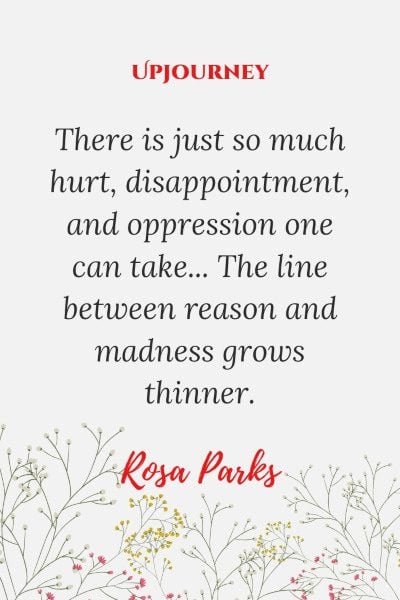 24. “As far back as I can remember, I knew there was something wrong with our way of life when people could be mistreated because of the color of their skin.”

25. “Whites would accuse you of causing trouble when all you were doing was acting like a normal human being instead of cringing.”

26. “I was born 50 years after slavery, in 1913. I was allowed to read. My mother, who was a teacher, taught me when I was a very young child. The first school I attended was a small building that went from first to sixth grade. There was one teacher for all of the students. There could be anywhere from 50 to 60 students of all different ages.”

27. “You spend your whole lifetime in your occupation, actually making life clever, easy and convenient for white people. But when you have to get transportation home, you are denied an equal accommodation. Our existence was for the white man’s comfort and well-being; we had to accept being deprived of just being human.”

28. “Memories of our lives, of our works and our deeds will continue in others.”

If you’d like to know more about Rosa Parks, we recommend you check out The Rebellious Life of Mrs. Rosa Parks by Jeanne Theoharis.