Lucius Annaeus Seneca, simply known as Seneca, was a Roman Stoic philosopher, orator, statesman, and playwright. Known as one of Rome’s leading intellectual figures, Seneca was also an advisor and a tutor to emperor Nero. He is popularly known for his philosophical works and for his plays which are mostly on the theme of tragedy.

Born in Hispania and raised in Rome, Seneca was taught the standard subjects of literature, rhetoric, and grammar as part of the traditional education of high-born Romans. He even received philosophical training from some of the most respected philosophers during his time.

Due to his family’s help and influence, Seneca was later elected as a quaestor which secured him the power to sit in the Roman Senate, where he proceeded to be a successful statesman and orator. Due to his remarkable gift for oratory, emperor Caligula became so jealous of Seneca that he ordered his execution. Seneca only escaped the execution due to his poor health.

Although he survived Caligula’s reign, Seneca was forced to live in exile because of an accusation but was later recalled to Rome to tutor Nero – the future emperor that would then order Seneca to kill himself all because of a misunderstanding.

We have compiled some of the most notable quotes and sayings by Seneca that explores his views about life, friendship, luck, and more.

1. “We never reflect how pleasant it is to ask for nothing.”

4. “Every new beginning comes from some other beginning’s end.”

5. “Begin at once to live, and count each separate day as a separate life.” 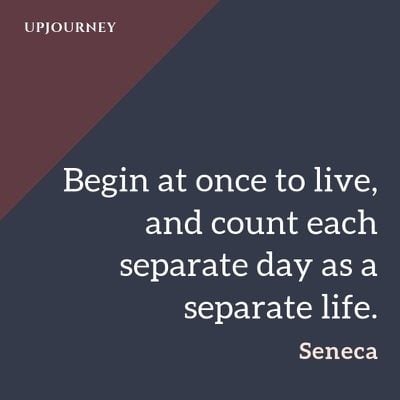 6. “Enjoy present pleasures in such a way as not to injure future ones.”

8. “Drunkenness is nothing but voluntary madness.”

9. “Luck is where opportunity meets preparation.”

If you would like to know more about the life and writings of Seneca, we would suggest you read Letters from a Stoic.