He is recognized for writing children’s books and even styled himself as ‘Uncle Shelby’ in some of his works. His published books sold more than 20 million copies and have been transcribed into more than 30 different languages.

He was also nominated for a Golden Globe Award and an Oscar Award for his song “I’m Checkin’ Out” and was awarded two Grammy Awards for his works including “A Boy Named Sue” and “Where the Sidewalk Ends.”

He was a man of rare gifts, with a strong sense of wisdom and humor. It’s no wonder why much of what he has said and written has become quite famous over the years. We have compiled some of Shel Silverstein’s notable quotes and sayings about art, life, friends, and much more.

1. “I myself do not believe in explaining anything.”

2. “Never explain what you do. It speaks for itself. You only muddle it by talking about it.”

3. “If you’re behind the times, they won’t notice you. If you’re right in tune with them, you’re no better than they are, so they won’t care much for you. Be just a little ahead of them.”

5. “I know a way to stay friends forever, There’s really nothing to it, I tell you what to do, And you do it.”

6. “If you want to find out what a writer or a cartoonist really feels, look at his work. That’s enough.” 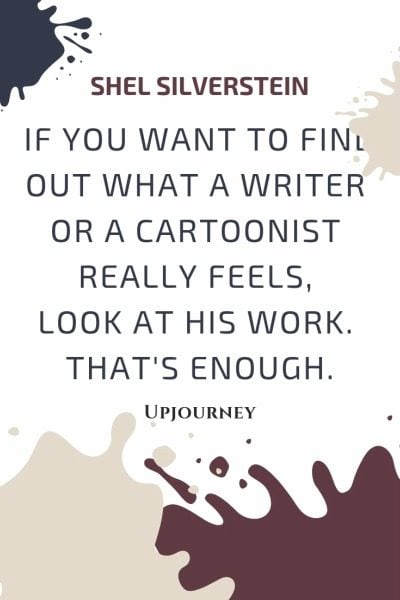 7. “I believe that if you don’t want to do anything, then sit there and don’t do it, but don’t expect people to hand you a corn beef sandwich and wash your socks for you and unzip your fly for you.”

10. “Imagine – four years you could have spent traveling around Europe meeting people, or going to the Far East of Africa or India, meeting people, exchanging ideas, reading all you wanted to anyway, and instead I wasted it at Roosevelt.”

11. “Stand-up comics reflect less of visual humor and more of a commentary.” 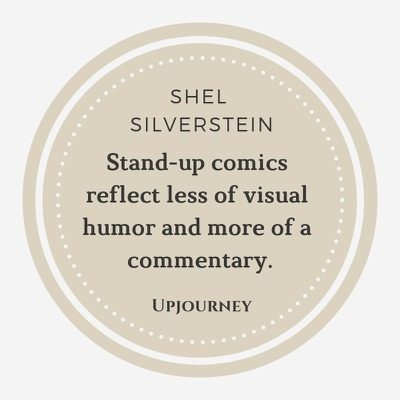 12. “You’d better get your laugh while you’re making your point, or you won’t be doing it very long.”

13. “If the track is tough and the hill is rough, THINKING you can just ain’t enough!”

If you enjoyed this collection of Shel Silverstein quotes, then you’ll surely love one of his best-selling books titled Where the Sidewalk Ends Special Edition with 12 Extra Poems: Poems and Drawings.