Sojourner Truth was an abolitionist, a women’s rights activist, and a former slave. She was born into slavery in 1797 and later escaped to freedom with her daughter in 1826.

Truth is well-known for her speech on gender and racial inequalities, “Ain’t I a Woman?”, which she delivered spontaneously at the 1851 Ohio Women’s Rights Convention. She’s also one of the first black women to win a legal case against a white man.

Belle Baumfree was her given name, but when she became a Methodist, she gave herself the name Sojourner Truth. Though Truth started her career as an abolitionist, she also sponsored other reform causes, including prison reform, property rights, and universal suffrage.

Listed below are some of the most notable Sojourner Truth quotes which explore her thoughts and views on feminism, freedom, religion, and more.

1. “Truth is powerful and it prevails.”

2. “I know and do what is right better than many big men who read.” 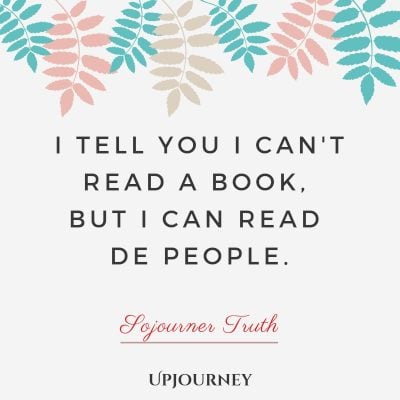 4. “The slaveholders are terrible for promising to give you this or that, or such and such a privilege, if you will do thus and so, and when the time of fulfillment comes, and one claims the promise, they, forsooth, recollect nothing of the kind; and you are, like as not, taunted with being a liar.”

5. “Where there is so much racket, there must be something out of kilter. I think that ‘twixt the Negroes of the South and the women at the North, all talking about rights, the white men will be in a fix pretty soon.”

6. “When I got religion, I found some work to do to benefit somebody.”

7. “Those are the same stars, and that is the same moon, that look down upon your brothers and sisters, and which they see as they look up to them, though they are ever so far away from us, and each other.” 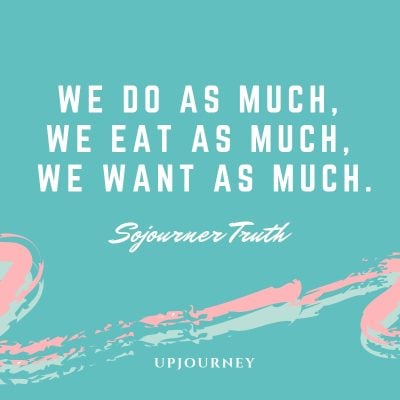 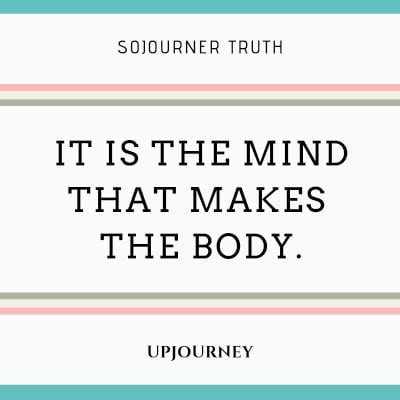 13. “If women want any rights more than they’s got, why don’t they just take them, and not be talking about it.”