Stephen King is one of the most prolific and successful American fiction writers. At the age of 70, King has sold more than 300 million copies of his novels and short-story collections. He is best known for It, Carrie, and The Shining. Many of his works have been adapted for TV and film.

Born in 1947, King was the youngest son of Donald and Nellie King. He was two years when, one day, Donald left the house to buy a cigarette and never returned. Nellie raised King and his older brother, David, and the three of them lived in Maine.

At the age of 19, he enrolled in the University of Maine and earned a degree of Bachelor of Arts in English. One year later, he married his wife, Tabitha.

King’s big break happened when he sold his first novel, Carrie, in 1973. After the novel’s success, King left his teaching job and started writing full time. From then on, he has published dozens of books like Pet Sematary, Cujo, Firestarter, and many more.

Besides his writing career, King has a band called Blue Oyster Cult. He also does charity work with his wife through the Stephen and Tabitha King Foundation, which has an annual giving amount of over $2 million.

Discover the dark and creative mind of this masterful writer through some of the famous Stephen King quotes and sayings that explore his views on writing, life, and many more.

1. “You have to stay faithful to what you’re working on.” 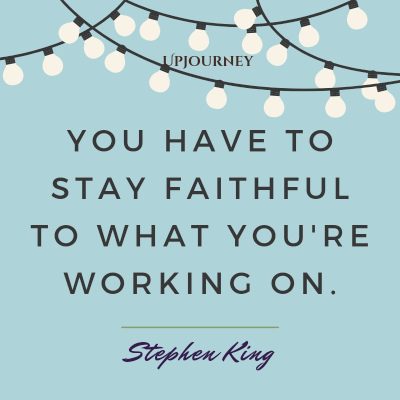 4. “If you want to be a writer, you must do two things above all others: read a lot and write a lot. There’s no way around these two things that I’m aware of, no shortcut.”

5. “You cannot hope to sweep someone else away by the force of your writing until it has been done to you.”

6. “I can remember being home from school with tonsillitis and writing stories in bed to pass the time.”

7. “Wherever you write is supposed to be a little bit of a refuge, a place where you can get away from the world. The more closed in you are, the more you’re forced back on your own imagination.”

8. “Like anything else that happens on its own, the act of writing is beyond currency. Money is great stuff to have, but when it comes to the act of creation, the best thing is not to think of money too much. It constipates the whole process.”

9. “But I think talent as a writer is hard-wired in, it’s all there, at least the basic elements of it. You can’t change it any more than you can choose whether to be right handed or left handed.”

10. “I was in enough to get along with people. I was never socially inarticulate. Not a loner. And that saved my life, saved my sanity. That and the writing. But to this day I distrust anybody who thought school was a good time. Anybody.”

11. “Poets, in my view, and I think the view of most people, do speak God’s language – it’s better, it’s finer, it’s language on a higher plane than ordinary people speak in their daily lives.” 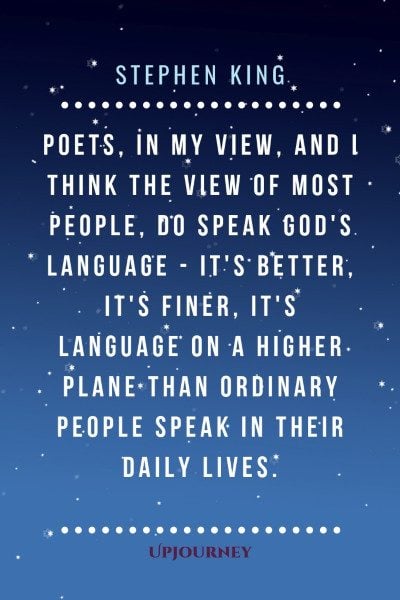 12. “People want to know why I do this, why I write such gross stuff. I like to tell them I have the heart of a small boy… and I keep it in a jar on my desk.”

13. “We like to think about how smart we are. But I think talent as a writer is hard-wired in, it’s all there, at least the basic elements of it. You can’t change it any more than you can choose whether to be right handed or left handed.”

14. “Writing isn’t about making money, getting famous, getting dates, getting laid, or making friends. In the end, it’s about enriching the lives of those who will read your work, and enriching your own life, as well”

2. “I love the movies, and when I go to see a movie that’s been made from one of my books, I know that it isn’t going to be exactly like my novel because a lot of other people have interpreted it. But I also know it has an idea that I’ll like because that idea occurred to me, and I spent a year, or a year and a half of my life working on it.”

3. “Life is like a wheel. Sooner or later, it always come around to where you started again.”

4. “When his life was ruined, his family killed, his farm destroyed, Job knelt down on the ground and yelled up to the heavens, ‘Why god? Why me?’ and the thundering voice of God answered, ‘There’s just something about you that pisses me off.'”

5. “I think there ought to be some serious discussion by smart people, really smart people, about whether or not proliferation of things like The Smoking Gun and TMZ and YouTube and the whole celebrity culture is healthy.”

6. “I’ve always believed in God. I also think that’s the sort of thing that either comes as part of the equipment, the capacity to believe, or at some point in your life, when you’re in a position where you actually need help from a power greater than yourself, you simply make an agreement.”

7. “When his life was ruined, his family killed, his farm destroyed, Job knelt down on the ground and yelled up to the heavens, ‘Why god? Why me?’ and the thundering voice of God answered, ‘There’s just something about you that pisses me off.'”

8. “Each life makes its own imitation of immortality.” 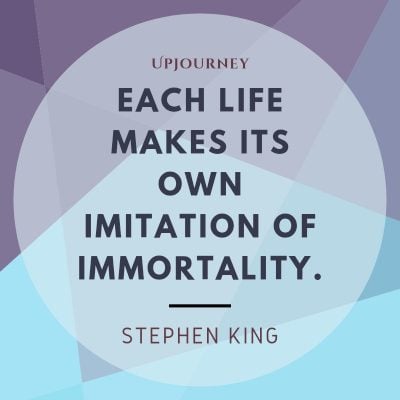 9. “A lot of us grow up and we grow out of the literal interpretation that we get when we’re children, but we bear the scars all our life. Whether they’re scars of beauty or scars of ugliness, it’s pretty much in the eye of the beholder.”

1. “In small towns people scent the wind with noses of uncommon keenness.”

2. “The place where you made your stand never mattered. Only that you were there… and still on your feet.”

3. “I never saw any of my dad’s stories. My mother said he had piles and piles of manuscripts.”

4. “Talent is cheaper than table salt. What separates the talented individual from the successful one is a lot of hard work.”

5. “I watched Titanic when I got back home from the hospital, and cried. I knew that my IQ had been damaged.”

7. “No, it’s not a very good story – its author was too busy listening to other voices to listen as closely as he should have to the one coming from inside.”

8. “It’s a mystery. That’s the first thing that interests me about the idea of God. If there is one, it’s mysterious and powerful and awesome to even consider the concept, and you have to take it seriously.”

9. “You can’t deny laughter; when it comes, it plops down in your favorite chair and stays as long as it wants.” 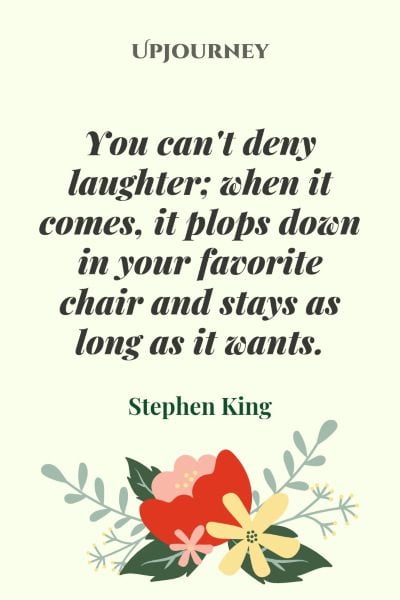 11. “Talent in cheaper than table salt. What separates the talented individual from the successful one is a lot of hard work.”

12. “What charitable 1 percenters can’t do is assume responsibility – America’s national responsibilities: the care of its sick and its poor, the education of its young, the repair of its failing infrastructure, the repayment of its staggering war debts.”

14. “Every book you pick up has its own lesson or lessons, and quite often the bad books have more to teach than the good ones.”

15. “Americans are apocalyptic by nature. The reason why is that we’ve always had so much, so we live in deadly fear that people are going to take it away from us.”

16. “We’ve switched from a culture that was interested in manufacturing, economics, politics – trying to play a serious part in the world – to a culture that’s really entertainment-based.”

17. “The trust of the innocent is the liar’s most useful tool.”

18. “Only enemies speak the truth friends and lovers lie endlessly, caught in the web of duty.”

19. “We make up horrors to help us cope with the real ones.” 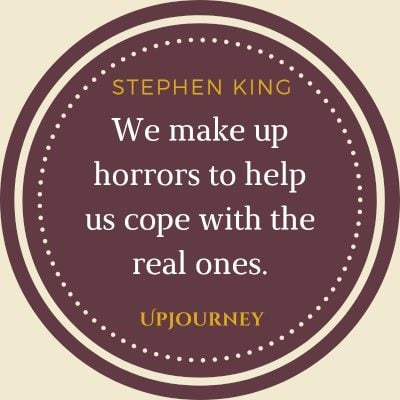 20. “Monsters are real, and ghosts are real too. They live inside us, and sometimes, they win.”

21. “It’s better to be good than evil, but one achieves goodness at a terrific cost.”

22. “Well, I’m like a drug addict, I’m always saying I’m going to stop, and then I don’t, what I’ve said consistently is that I hope I know when to stop: when it starts to get repetitive.”

23. “I am the literary equivalent of a Big Mac and Fries.”

24. “The most important things are the hardest things to say. They are the things you get ashamed of because words diminish your feelings – words shrink things that seem timeless when they are in your head to no more than living size when they are brought out.”

25. “I guess when you turn off the main road, you have to be prepared to see some funny houses.”

27. “You see something, then it clicks with something else, and it will make a story. But you never know when it’s going to happen.” 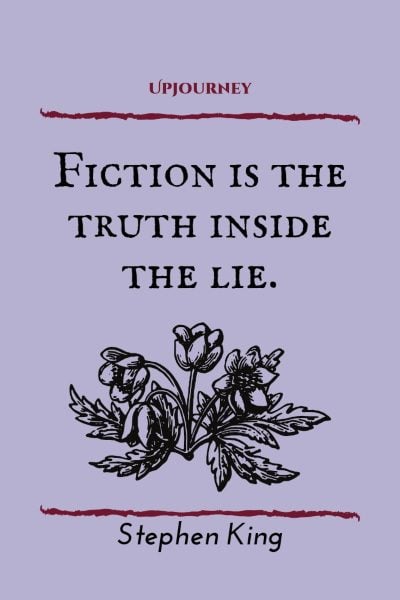 30. “He had a massive stroke. He died with his tie on. Do you think that could be our generation’s equivalent of that old saying about dying with your boots on?”

31. “French is the language that turns dirt into romance.”

If you’d like read some of Stephen King’s works, we suggest you read It, On Writing, and The Mist.