Saint Thomas Aquinas was an Italian Doctor of the Church, Catholic priest, and Dominican friar. He was also an exceptionally distinguished philosopher, jurist, and theologian, and was recognized as the Doctor Angelicus and the Doctor Communis.

He is regarded as the Father of Thomism and the first classical proponent of natural theology (a type of theology that renders arguments for the existence of God based on reason, understanding, and everyday experience of nature).

Thomas adopted several ideas put forward by Aristotle and strived to integrate Aristotelian philosophy with the teachings and principles of Christianity. Much of modern philosophy either rejected or developed his ideas, especially in the areas of natural law, ethics, political theory, and metaphysics.

The Catholic Church also honors Thomas Aquinas as a saint and considers him as the model teacher for those studying for the priesthood. In recent times, his works are still being used as a core of the required program of study for those seeking to be priests or deacons and for other students of the sacred disciplines including Catholic theology, philosophy, and church history among many others.

We have gathered some of the most notable quotes and sayings by Saint Thomas Aquinas that show his thoughts and views about justice, faith, self, love, and many more.

1. “Three conditions are necessary for Penance: contrition, which is sorrow for sin, together with a purpose of amendment; confession of sins without any omission; and satisfaction by means of good works.” 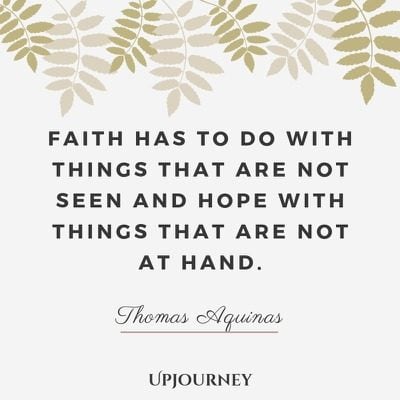 4. “How can we live in harmony? First, we need to know we are all madly in love with the same God.”

6. “All that is true, by whomsoever it has been said has its origin in the Spirit.”

7. “The truth of our faith becomes a matter of ridicule among the infidels if any Catholic, not gifted with the necessary scientific learning, presents as dogma what scientific scrutiny shows to be false.”

9. “To convert somebody go and take them by the hand and guide them.”

10. “Clearly the person who accepts the Church as an infallible guide will believe whatever the Church teaches.”

11. “It is clear that he does not pray, who, far from uplifting himself to God, requires that God shall lower Himself to him, and who resorts to prayer not to stir the man in us to will what God wills, but only to persuade God to will what the man in us wills.”

12. “If, then, you are looking for the way by which you should go, take Christ because He Himself is the way.”

13. “God should not be called an individual substance since the principle of individuation is matter.”

14. “Hold firmly that our faith is identical with that of the ancients. Deny this, and you dissolve the unity of the Church.”

15. “That the saints may enjoy their beatitude and the grace of God more abundantly they are permitted to see the punishment of the damned in hell.”

16. “It is possible to demonstrate God’s existence, although not a priori, yet a posteriori from some work of His more surely known to us.”

17. “There is but one Church in which men find salvation, just as outside the ark of Noah it was not possible for anyone to be saved.” 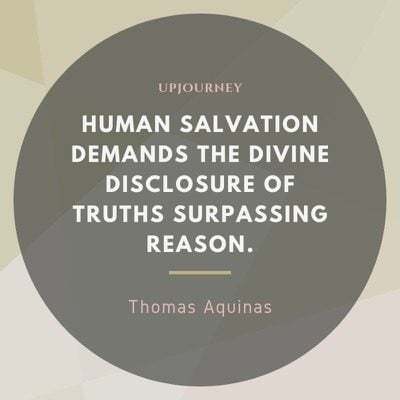 19. “It is necessary to posit something which is necessary of itself, and has no cause of its necessity outside of itself but is the cause of necessity in other things. And all people call this thing God.”

20. “The theologian considers sin mainly as an offense against God; the moral philosopher as contrary to reasonableness.”

Thomas Aquinas Quotes About Self

1. “We can’t have full knowledge all at once. We must start by believing; then afterward we may be led on to master the evidence for ourselves.”

2. “Man should not consider his material possession his own, but as common to all, so as to share them without hesitation when others are in need.”

3. “Well-ordered self-love is right and natural.”

5. “Happiness is secured through virtue; it is a good attained by man’s own will.”

7. “All the efforts of the human mind cannot exhaust the essence of a single fly.”

8. “The highest manifestation of life consists in this: that a being governs its own actions. A thing which is always subject to the direction of another is somewhat of a dead thing.”

9. “Man cannot live without joy; therefore when he is deprived of true spiritual joys it is necessary that he become addicted to carnal pleasures.”

10. “Temperance is simply a disposition of the mind which binds the passion.”

1. “Law is nothing other than a certain ordinance of reason for the common good, promulgated by the person who has the care of the community.”

2. “If forgers and malefactors are put to death by the secular power, there is much more reason for excommunicating and even putting to death one convicted of heresy.”

3. “Law; an ordinance of reason for the common good, made by him who has the care of the community.” 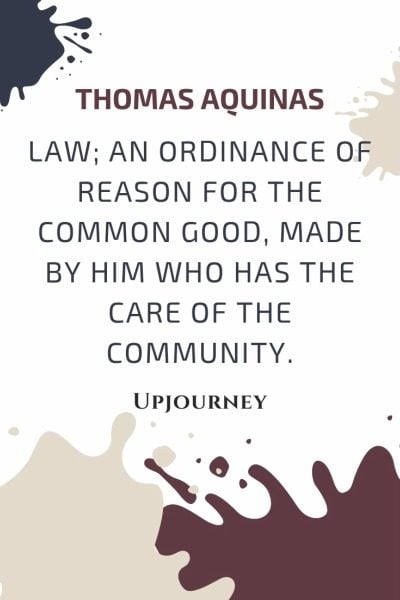 4. “Every judgment of conscience, be it right or wrong, be it about things evil in themselves or morally indifferent, is obligatory, in such wise that he who acts against his conscience always sins.”

5. “Justice is a certain rectitude of mind whereby a man does what he ought to do in the circumstances confronting him.”

1. “Love must precede hatred, and nothing is hated save through being contrary to a suitable thing which is loved. And hence it is that every hatred is caused by love.”

2. “Love is a binding force, by which another is joined to me and cherished by myself.”

3. “There is nothing on this earth more to be prized than true friendship.”

4. “Love takes up where knowledge leaves off.” 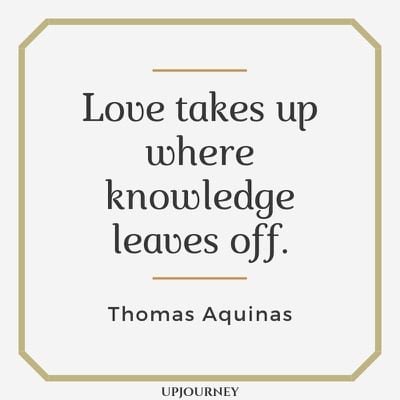 1. “Distinctions drawn by the mind are not necessarily equivalent to distinctions in reality.”

2. “Most men seem to live according to sense rather than reason.”

3. “In order for a war to be just, three things are necessary. First, the authority of the sovereign. Secondly, a just cause. Thirdly, a rightful intention.”

4. “Not everything that is more difficult is more meritorious.”

5. “It is requisite for the relaxation of the mind that we make use, from time to time, of playful deeds and jokes.”

6. “Perfection of moral virtue does not wholly take away the passions, but regulates them.”

8. “Friendship is the source of the greatest pleasures, and without friends even the most agreeable pursuits become tedious.”

9. “Because of the diverse conditions of humans, it happens that some acts are virtuous to some people, as appropriate and suitable to them, while the same acts are immoral for others, as inappropriate to them.”

10. “The principal act of courage is to endure and withstand dangers doggedly rather than to attack them.” 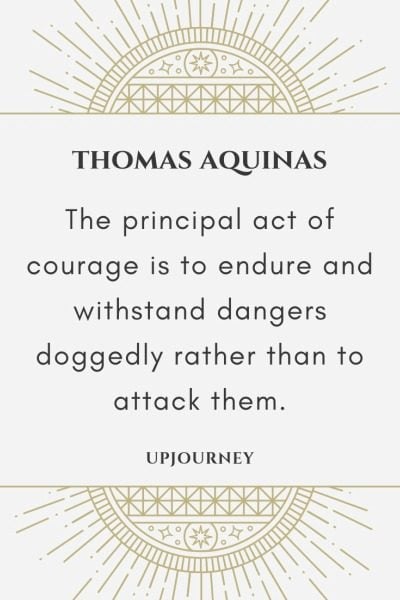 12. “Sorrow can be alleviated by good sleep, a bath and a glass of wine.”

16. “The test of the artist does not lie in the will with which he goes to work, but in the excellence of the work he produces.”

17. “Wonder is the desire for knowledge.”

18. “A man has free choice to the extent that he is rational.”

19. “Moral science is better occupied when treating of friendship than of justice.” 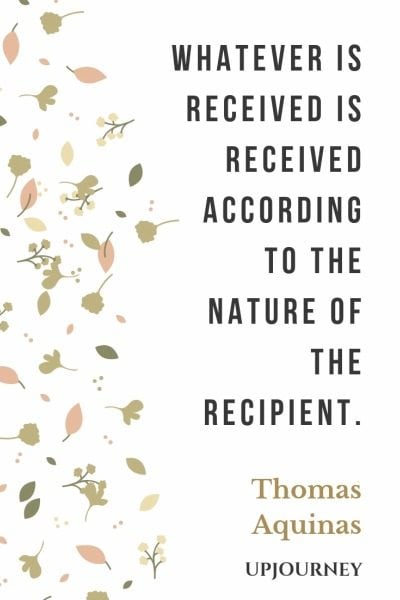 21. “Because philosophy arises from awe, a philosopher is bound in his way to be a lover of myths and poetic fables. Poets and philosophers are alike in being big with wonder.”

22. “By nature, all men are equal in liberty, but not in other endowments.”

24. “If the highest aim of a captain were to preserve his ship, he would keep it in port forever.”

26. “How is it they live in such harmony the billions of stars – when most men can barely go a minute without declaring war in their minds about someone they know.”

If you would like to know more about the life and spiritual teachings of the Catholic Church’s greatest classical theologian, we would suggest you read Thomas Aquinas: Spiritual Master (Crossroad Spiritual Legacy Series) by Robert Barron.