Vince Lombardi was a professional NFL coach of the Green Bay Packers, a team who won five championships under his guidance and firm yet leadership.

Under his football scholarship in college, Lombardi played for the Fordham Rams of Fordham University. There he learned never to underestimate his opponents after Lombardi and his team lost to the Pittsburgh Panthers.

In 1954, the 41-year-old Lombardi started his NFL career with the New York Giants as the offensive coordinator position. However, he receives his first head coach position five years later for the Green Bay Packers. Under his leadership, the team showed significant improvement.

Lombardi would be known for his unbiased nature and zero-tolerance towards discrimination of race and gender throughout his NFL coaching career. Even after his death at the age of 57 due to an aggressive form of colon cancer. He was also inducted into the Pro Football Hall of Fame and had his name adorned in the trophy awarded to the Super Bowl champion each year after his death.

Propel yourself to victory as you motivate yourself through these Vince Lombardi quotes that may teach you something about coaching, teamwork, winning, and more.

1. “Leaders are made, they are not born. They are made by hard effort, which is the price which all of us must pay to achieve any goal that is worthwhile.”

2. “Practice does not make perfect. Only perfect practice makes perfect.” 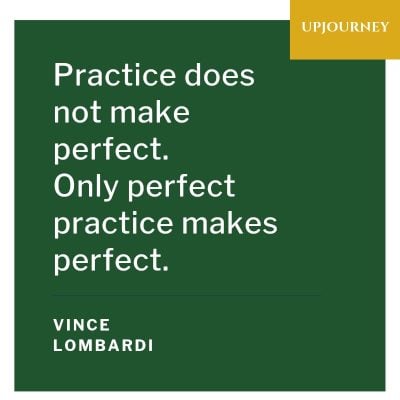 3. “The leader can never close the gap between himself and the group. If he does, he is no longer what he must be. He must walk a tightrope between the consent he must win and the control he must exert.”

4. “Some people try to find things in this game that don’t exist but football is only two things – blocking and tackling.”

5. “Coaches who can outline plays on a black board are a dime a dozen. The ones who win get inside their player and motivate.”

1. “Some guys play with their heads. That’s okay. You’ve got to be smart to be number one in any business. But more importantly, you’ve got to play with your heart, with every fiber of your body.”

2. “Some of us will do our jobs well and some will not, but we will be judged by only one thing-the result.”

3. “People who work together will win, whether it be against complex football defenses, or the problems of modern society.”

4. “Football is a great deal like life in that it teaches that work, sacrifice, perseverance, competitive drive, selflessness and respect for authority is the price that each and every one of us must pay to achieve any goal that is worthwhile.”

5. “If you’re lucky enough to find a guy with a lot of head and a lot of heart, he’s never going to come off the field second.”

6. “Teamwork is what the Green Bay Packers were all about. They didn’t do it for individual glory. They did it because they loved one another.”

7. “Individual commitment to a group effort – that is what makes a team work, a company work, a society work, a civilization work.”

8. “The achievements of an organization are the results of the combined effort of each individual.” 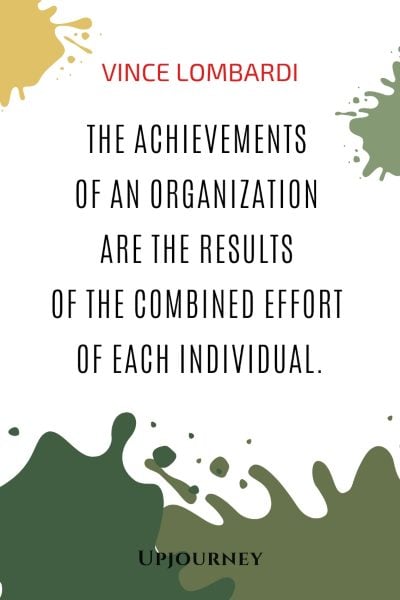 9. “Go back through football, and you will see that the team with the best defense wins.”

3. “The real glory is being knocked to your knees and then coming back. That’s real glory. That’s the essence of it.”

4. “We would accomplish many more things if we did not think of them as impossible.”

5. “Once you agree upon the price you and your family must pay for success, it enables you to ignore the minor hurts, the opponent’s pressure, and the temporary failures.”

6. “The only place success comes before work is in the dictionary.” 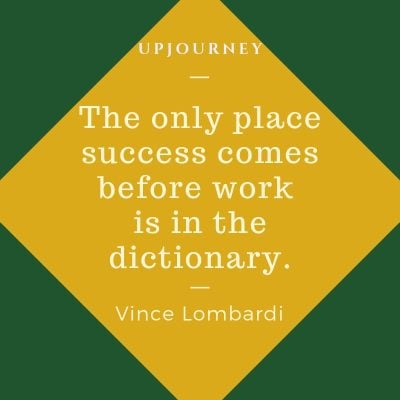 7. “The price of success is hard work, dedication to the job at hand, and the determination that whether we win or lose, we have applied the best of ourselves to the task at hand.”

8. “The greatest accomplishment is not in never falling, but in rising again after you fall.”

10. “Dictionary is the only place that success comes before work. Hard work is the price we must pay for success. I think you can accomplish anything if you’re willing to pay the price.”

11. “Perfection is not attainable, but if we chase perfection we can catch excellence.”

12. “I firmly believe that any man’s finest hour, the greatest fulfillment of all that he holds dear, is that moment when he has worked his heart out in a good cause and lies exhausted on the field of battle – victorious.”

13. “The quality of a person’s life is in direct proportion to their commitment to excellence, regardless of their chosen field of endeavor.”

2. “If winning isn’t everything, why do they keep score?”

3. “Winning isn’t everything, it’s the only thing.” 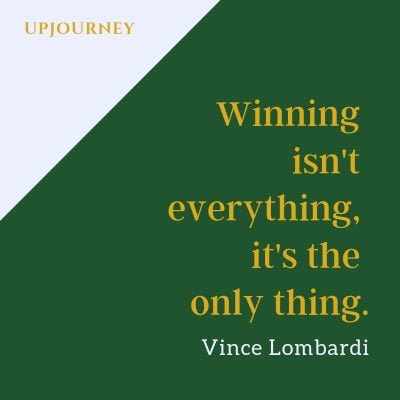 4. “Winning isn’t everything, but the will to win is everything.”

6. “Winning is habit. Unfortunately, so is losing.”

8. “Winning is not everything, but wanting to win is.”

1. “There is no room for second place. There is only one place in my game and that is the first place. I have finished second twice in my time at Green Bay and I never want to finish second again.”

2. “The harder you work, the harder it is to surrender.”

3. “I don’t think there’s a punch-line scheduled, is there?” 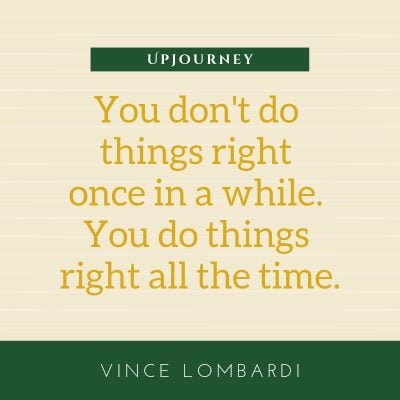 5. “At many a moment on many a day, I am convinced that pro football must be a game for madmen, and I must be one of them.”

7. “Confidence is contagious. So is lack of confidence.”

11. “A school without football is in danger of deteriorating into a medieval study hall.”

12. “Unless a man believes in himself and makes a total commitment to his career and puts everything he has into it – his mind, his body, his heart – what’s life worth to him?” 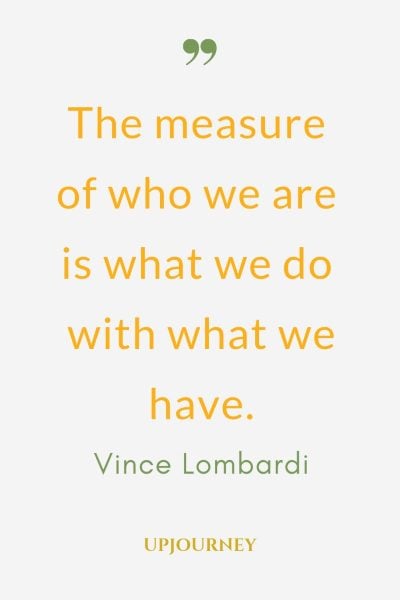 If you would like to know more about Vince Lombardi’s life, we suggest you get a copy of his biography When Pride Still Mattered : A Life Of Vince Lombardi written by David Maraniss.