Adeline Virginia Woolf was a brilliant essayist, novelist, and critic. She is also recognized as one of England’s most prominent writers and is widely known for her works including To the Lighthouse, Orlando, and Mrs. Dalloway.

Woolf’s works have been transcribed into more than 50 languages, and she became one of the primary subjects of the 70s movement of feminist criticism. Her writings have since earned extensive critique and much attention for “inspiring feminism.”

Throughout her career, Woolf has written several short fictions, experimented with various forms of biographical writing, and left behind a lifetime of profound letters that were sent to her friends and family.

Unfortunately, it seemed that death followed everyone she loved. Eventually, Woolf could not cope with the terrible events in her life and had a nervous breakdown. She was then institutionalized several times and tried to commit suicide at least twice. Throughout her life, Woolf was troubled by bouts of mental illness, and in 1941, she took her own life at age 59.

We have compiled some of the most notable Virginia Woolf quotes and sayings that explore her thoughts and views about life, literature, feminism, and many more.

2. “This soul, or life within us, by no means, agree with the life outside us. If one has the courage to ask her what she thinks, she is always saying the very opposite to what other people say.”

3. “Life is not a series of gig lamps symmetrically arranged; life is a luminous halo, a semi-transparent envelope surrounding us from the beginning of consciousness to the end.”

4. “Someone has to die in order that the rest of us should value life more.”

5. “Sleep, that deplorable curtailment of the joy of life.” 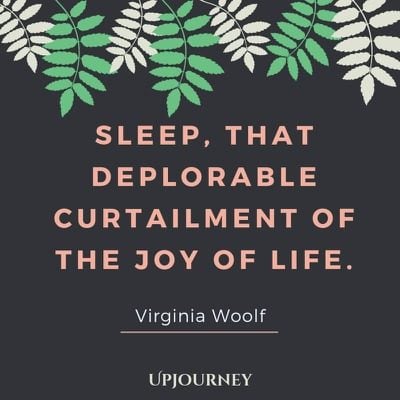 1. “I want the concentration and the romance, and the worlds all glued together, fused, glowing: have no time to waste any more on prose.”

2. “A good essay must have this permanent quality about it; it must draw its curtain round us, but it must be a curtain that shuts us in not out.”

3. Yet, it is true, poetry is delicious; the best prose is that which is most full of poetry.

4. “Almost any biographer, if he respects facts, can give us much more than another fact to add to our collection. He can give us the creative fact; the fertile fact; the fact that suggests and engenders.”

5. “Odd how the creative power at once brings the whole universe to order.”

7. “A woman must have money and a room of her own if she is to write fiction.” 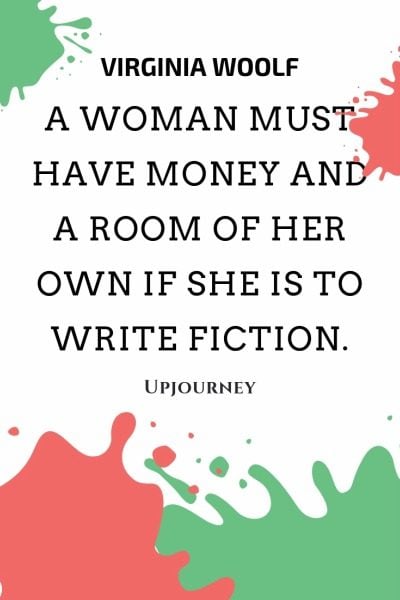 8. “Some people go to priests; others to poetry; I to my friends.”

9. “Every secret of a writer’s soul, every experience of his life, every quality of his mind is written largely in his works.”

10. “Nothing induces me to read a novel except when I have to make money by writing about it. I detest them.”

11. “A masterpiece is something said once and for all, stated, finished, so that it’s there complete in the mind, if only at the back.”

12. “Literature is strewn with the wreckage of men who have minded beyond reason the opinions of others.”

14. “Fiction is like a spider’s web, attached ever so slightly perhaps, but still attached to life at all four corners. Often the attachment is scarcely perceptible.”

15. “The poet gives us his essence, but prose takes the mold of the body and mind.” 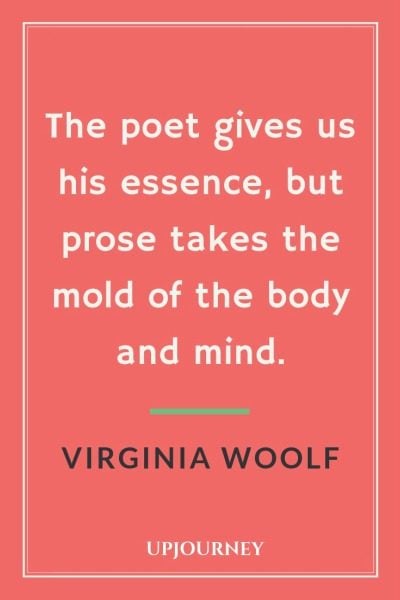 16. “I would venture to guess that Anon, who wrote so many poems without signing them, was often a woman.”

17. “It is the nature of the artist to mind excessively what is said about him. Literature is strewn with the wreckage of men who have minded beyond reason the opinions of others.”

18. “This is not writing at all. Indeed, I could say that Shakespeare surpasses literature altogether if I knew what I meant.”

1. “Women have served all these centuries as looking-glasses possessing the power of reflecting the figure of man at twice its natural size.”

2. “It is fatal to be a man or woman pure and simple: one must be a woman manly, or a man womanly.”

3. “Why are women… so much more interesting to men than men are to women?”

4. “If one could be friendly with women, what a pleasure – the relationship so secret and private compared with relations with men. Why not write about it truthfully?”

5. “Who shall measure the hat and violence of the poet’s heart when caught and tangled in a woman’s body?”

6. “There can be no two opinions as to what a highbrow is. He is the man or woman of thoroughbred intelligence who rides his mind at a gallop across country in pursuit of an idea.”

8. “For most of history, Anonymous was a woman.” 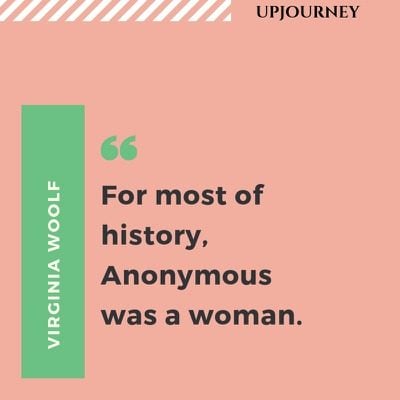 9. “If we help an educated man’s daughter to go to Cambridge are we not forcing her to think not about education but about war? – not how she can learn, but how she can fight in order that she might win the same advantages as her brothers?”

10. “The history of men’s opposition to women’s emancipation is more interesting perhaps than the story of that emancipation itself.”

Virginia Woolf Quotes About Growing Up

1. “The older one grows, the more one likes indecency.”

2. “These are the soul’s changes. I don’t believe in aging. I believe in forever altering one’s aspect to the sun. Hence my optimism.”

3. “One of the signs of passing youth is the birth of a sense of fellowship with other human beings as we take our place among them.”

4. “That great Cathedral space which was childhood.” 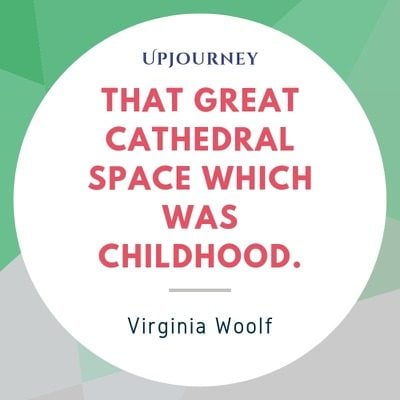 5. “If you do not tell the truth about yourself you cannot tell it about other people.”

1. “Each has his past shut in him like the leaves of a book known to him by his heart, and his friends can only read the title.”

2. “Rigid, the skeleton of habit alone upholds the human frame.”

3. “Humor is the first of the gifts to perish in a foreign tongue.”

5. “One cannot think well, love well, sleep well if one has not dined well.” 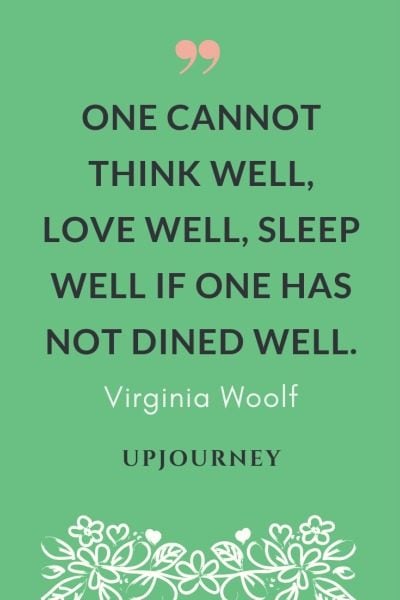 6. “Great bodies of people are never responsible for what they do.”

7. “The eyes of others our prisons; their thoughts our cages.”

8. “For what Harley Street specialist has time to understand the body, let alone the mind or both in combination when he is a slave to thirteen thousand a year?”

9. “Yet it is in our idleness, in our dreams, that the submerged truth sometimes comes to the top.”

10. “My own brain is to me the most unaccountable of machinery – always buzzing, humming, soaring roaring diving, and then buried in mud. And why? What’s this passion for?”

11. “The connection between dress and war is not far to seek; your finest clothes are those you wear as soldiers.”

13. “We are nauseated by the sight of trivial personalities decomposing in the eternity of print.”

14. “The beautiful seems right by force of beauty, and the feeble wrong because of weakness.”

15. “It is in our idleness, in our dreams, that the submerged truth sometimes comes to the top.” 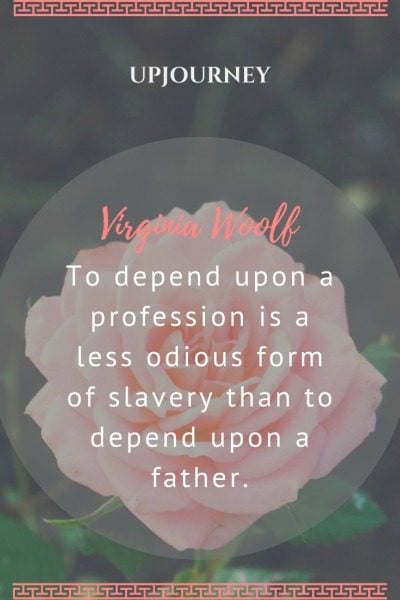 18. “I can only note that the past is beautiful because one never realizes an emotion at the time. It expands later, and thus we don’t have complete emotions about the present, only about the past.”

20. “Boredom is the legitimate kingdom of the philanthropic.”

21. “The beauty of the world, which is so soon to perish, has two edges, one of laughter, one of anguish, cutting the heart asunder.”

22. “Masterpieces are not single and solitary births; they are the outcome of many years of thinking in common, of thinking by the body of the people, so that the experience of the mass is behind the single voice.”

23. “If you insist upon fighting to protect me, or ‘our’ country, let it be understood soberly and rationally between us that you are fighting to gratify a sex instinct which I cannot share; to procure benefits where I have not shared and probably will not share.”

24. “We can best help you to prevent war not by repeating your words and following your methods but by finding new words and creating new methods.”

25. “Where the Mind is biggest, the Heart, the Senses, Magnanimity, Charity, Tolerance, Kindliness, and the rest of them scarcely have room to breathe.”

26. “It seems as if an age of genius must be succeeded by an age of endeavor; riot and extravagance by cleanliness and hard work.”

27. “When the shriveled skin of the ordinary is stuffed out with meaning, it satisfies the senses amazingly.”

28. “Thought and theory must precede all salutary action, yet the action is nobler in itself than either thought or theory.” 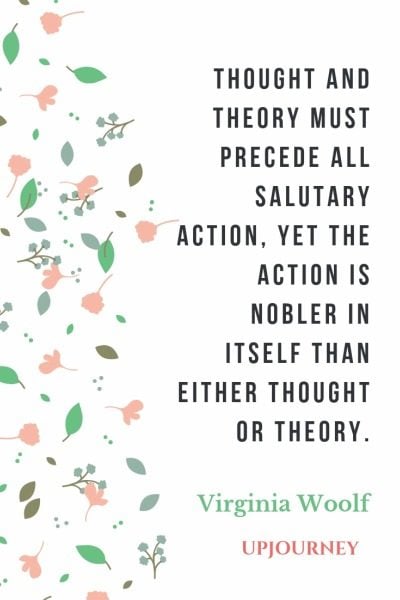 29. “Let a man get up and say, Behold, this is the truth, and instantly I perceive a sandy cat filching a piece of fish in the background. Look, you have forgotten the cat, I say.”

30. “Somewhere, everywhere, now hidden, now apparent in whatever is written down, is the form of a human being. If we seek to know him, are we idly occupied?”

31. “Mental fight means thinking against the current, not with it. It is our business to puncture gas bags and discover the seeds of truth.”

32. “Once conform, once do what other people do because they do it, and a lethargy steals over all the finer nerves and faculties of the soul. She becomes all outer show and inward emptiness; dull, callous, and indifferent.”

33. “On the outskirts of every agony sits some observant fellow who points.”

35. “There is much to support the view that it is clothes that wear us, and not we, them; we may make them take the mold of arm or breast, but they mold our hearts, our brains, our tongues to their liking.”

36. “It’s not catastrophes, murders, deaths, diseases, that age and kill us; it’s the way people look and laugh, and run up the steps of omnibuses.”

37. “To enjoy the freedom we have to control ourselves.”

38. “Nothing has really happened until it has been recorded.” 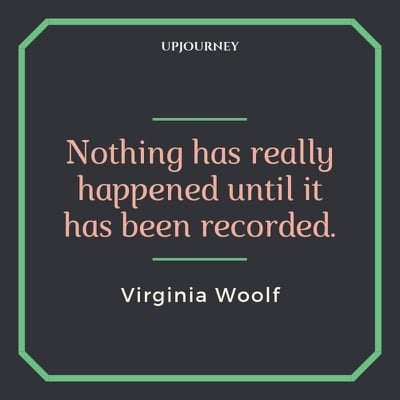 39. “It is far more difficult to murder a phantom than a reality.”

40. “Arrange whatever pieces come your way.”

41. “One likes people much better when they’re battered down by a prodigious siege of misfortune than when they triumph.”

42. “Really I don’t like human nature unless all candied over with art.”

43. “It is curious how instinctively one protects the image of oneself from idolatry or any other handling that could make it ridiculous, or too unlike the original to be believed any longer.”

44. “The telephone, which interrupts the most serious conversations and cuts short the most weighty observations, has a romance of its own.”

45. “One has to secrete a jelly in which to slip quotations down people’s throats – and one always secretes too much jelly.”

If you want to learn more about the works and writings of the brilliant Virginia Woolf, we would suggest you read one of her famous novels, Mrs. Dalloway.