Are you up for a total mind-body workout?

Yoga came from the Sanskrit word yuj, which means to join, unite, or yoke. It originated from India and is considered the oldest system of personal development.

The earliest practice was by Patanjali, a scholar who first wrote the principles of yoga during the 2nd century. In yoga, the integration of physical postures, breathing techniques, as well as meditation is essential.

Yoga has different styles. Some focus on poses and breathing, while others require more movements. Regardless, they all aim to harmonize the body, mind, and spirit. 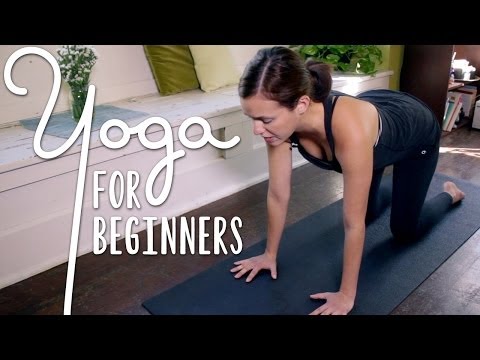 Yoga has been more prevalent recently — many, including celebrities and other famous personalities, practice yoga for health and relaxation purposes.

If you love yoga, here are 168 quotes and sayings that will make you love it even more. If you’ve not tried it yet, these quotes will help you know more about yoga.

1. “You know how every model is like, ‘I do yoga.’ Well, I find horses have the same effect.” – Bella Hadid

2. “Yoga has trimmed my body in a way that the gym never could. I used to be a gym rat, but I switched to yoga and am now almost 10 pounds lighter. One important thing I’ve gotten from yoga is breathing. When I’m cooking, the top part of my body collapses down. It cuts off my diaphragm.” – Giada De Laurentiis 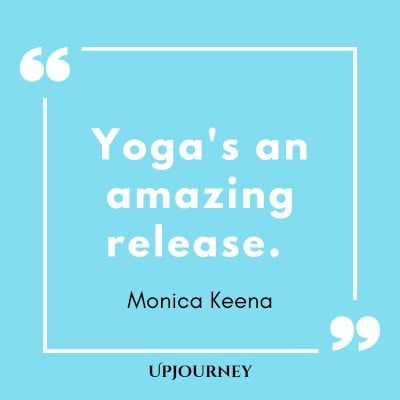 4. “I mean the whole thing about meditation and yoga is about connecting to the higher part of yourself, and then seeing that every living thing is connected in some way.” – Gillian Anderson

5. “Yoga helps me be a stronger runner. I can lose track of my form, and yoga reminds me how important it is.” – Danny Pudi

7. “I’ve started doing yoga and meditation, but I’m not very good at that kind of thing and turning my brain off.” – Cara Delevingne

8. “Yoga is a great thing and meditation is also great to get connected to yourself more.” – Ziggy Marley

9. “If you do Bikram Yoga, you exercise your body 100 percent.” – Bikram Choudhury 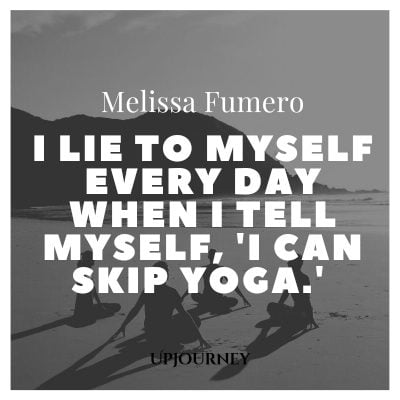 11. “Not only is yoga excellent for flexibility, but it is also a great tool for longevity and injury prevention, as it allows for internal body awareness.” – Kyle Shewfelt

12. “I like a lot of things about yoga – its an intro to good music; with each good teacher you study with, you learn a lot about them personally; it’s not just about specific technique or poses. I also like Shavasana – not too many exercise routines let you nap at the end of them. You don’t see nap pods in CrossFit gyms.” – Charles Michael Davis

14. “I began by doing physical yoga, initially just for the workout, as exercise. I would get peaceful and calm at the end of it, and I was curious about that.” – Mariel Hemingway

15. “You go to Starbucks, and you know what you’re going to get. It’s the same with my yoga.” – Bikram Choudhury

16. “I get into certain yoga positions at times, when I’m working out and for exercises. I use a little of it in some of my meditation, but I chant now and that sort of replaced it.” – John Astin

17. “Yoga is a method for restraining the natural turbulence of thoughts, which otherwise impartially prevent all men, of all lands, from glimpsing their true nature of Spirit. Yoga cannot know a barrier of East and West any more than does the healing and equitable light of the sun.” – Paramahansa Yogananda

18. “Yoga is a way to freedom. By its constant practice, we can free ourselves from fear, anguish and loneliness.” – Indra Devi

19. “The word ‘yoga’ means union. It’s like everything in yoga yokes or unites you to something higher, the highest part of yourself.” – Christy Turlington

20. “Yoga is the perfect way to de-stress and work out at the same time.” – Shannon Elizabeth 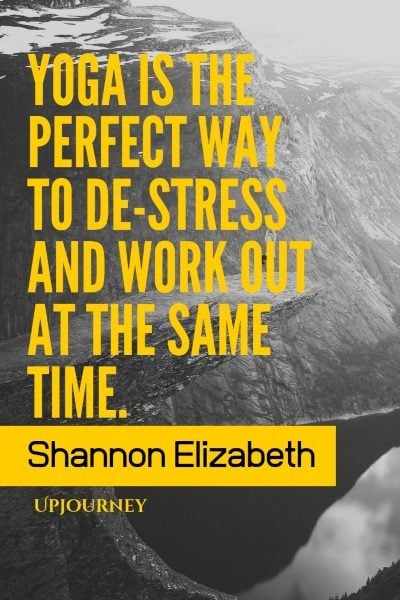 21. “Yoga has been the best tool for managing stress and life’s challenges. Everything from my studies to my father’s death was eased by my practice of it.” – Christy Turlington

23. “I always think I look better after a yoga class. It’s the same as a massage. We look so amazing after a massage because we’re relaxed.” – Andie MacDowell

24. “I’m a horrible perfectionist and very highly strung. That’s why I do yoga: to unwind.” – Felicity Jones

26. “I think yoga has given me better posture. People don’t realise how strong it makes you. You have to use your body weight to hold yourself. As you get older, you’re supposed to lift weights, but I find that kind of boring. Yoga is lifting my own body.” – Andie MacDowell

29. “Yoga has brought me closer to myself. It’s helped me realize the interconnectedness of the mind, body and spirit, in the Buddhist sense of the word.” – Christy Turlington

30. “I hope I will be a calm mother; I do yoga and I meditate, and those should help.” – Courtney Thorne-Smith 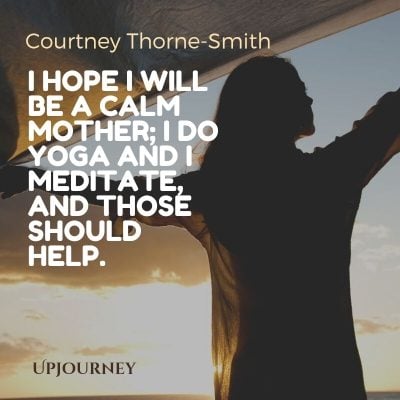 32. “Yoga always made me feel really good about myself.” – Scarlett Pomers

33. “For some reason, I find jogging incredibly boring, but yoga is the only thing I’ve been able to consistently do over the years. I think it’s because it also is sort of a mental exercise and calms you and refocuses you. So I find that that’s great, and sometimes someone will drag me to a spin class or on a hike.” – Alexandra Daddario

34. “Yoga is about compassion and generosity towards others. It means being mindful of the world around us.” – Christy Turlington

35. “I love yoga because not only is it a workout for your body, but also your breathing, which helps
release a lot of stress. It really prepares you for the day.” – Tia Mowry

36. “The highest Hindu intellectual training was based on the practice of yoga, and produced, as its fruit, those marvellous philosophical systems, the six Darshanas and the Brahma Sutras, which are still the delight of scholars and the inspiration of occultists and mystics.” – Annie Besant

37. “Yoga means union, in all its significances and dimensions.” – Indra Devi

38. “I took prenatal yoga three times a week, including the morning I went into labor. It helped me stay comfortable.” – Alyssa Milano

40. “It’s been my experience that the longer I do yoga, the more I want to know, the more I am able to understand and the less judgmental I am.” – Ali MacGraw 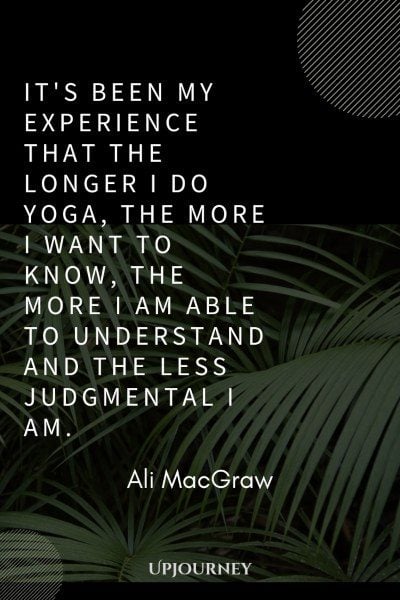 42. “Yoga is a big part of my life now. There’s not a day that goes by where I don’t do an Asana and mediation practice.” – Giancarlo Esposito

43. “I signed up with Kundalini yoga teacher training, which has been shifting me in some really beautiful ways.” – Angela Lindvall

44. “Yoga is my luxury workout. If I’m on vacation or I have a day off, I love a 90-minute yoga class. It’s a really strong workout, but it takes a little bit longer.” – Alison Sweeney

45. “Become slower in your journey through life. Practice yoga and meditation if you suffer from ‘hurry sickness.’ Become more introspective by visiting quiet places such as churches, museums, mountains and lakes. Give yourself permission to read at least one novel a month for pleasure.” – Wayne Dyer

46. “The yoga pose helps me to calm down and focus when I need to.” – Brianna Hildebrand

48. “I’ve been doing yoga since 1980 or ’81, and I’ve kind of developed my own routine. It’s challenging and thorough, but I’m not holy about it. Sometimes I’ll watch a tape of Jon Stewart’s show while exercising.” – April Gornik

49. “The goal in some types of yoga is to try and reconcile all the characters within a person, and, in fact, the word ‘yoga’ comes from the word ‘union.’” – Asghar Farhadi 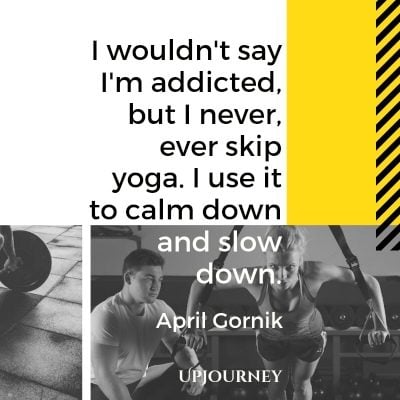 51. “It’s funny, I do try to maintain health. I started doing Bikram yoga which is that hothouse yoga, the 105 degrees yoga for 90 minutes. It’s great, you purge out all the sweat and you’re drinking water.” – Bryan Cranston

52. “My job involves a lot of sitting on aeroplanes and a lot of walking in high heels! I find yoga helps with both.” – Anja Rubik

54. “Yoga has helped me to see death as more of a gift than a loss, and that has been my experience so far.” – Christy Turlington

55. “Yoga has reinforced and grounded my own spiritual beliefs.” – Christy Turlington

56. “The meaning of yoga is connection of mind, body and spirit. If you have a bad telecommunication system, your body gets sick. Yoga helps fix that.” – Bikram Choudhury

57. “I get into certain yoga positions at times, when I’m working out and for exercises. I use a little of it in some of my meditation, but I chant now and that sort of replaced it.” – John Astin

60. “For me, first, it’s finding quiet in my life – and I do that through yoga and meditation. It’s also been a matter of changing the way I eat, because I think what we eat can inform who we are; food is a chemical and a drug to a certain extent.” – Mariel Hemingway 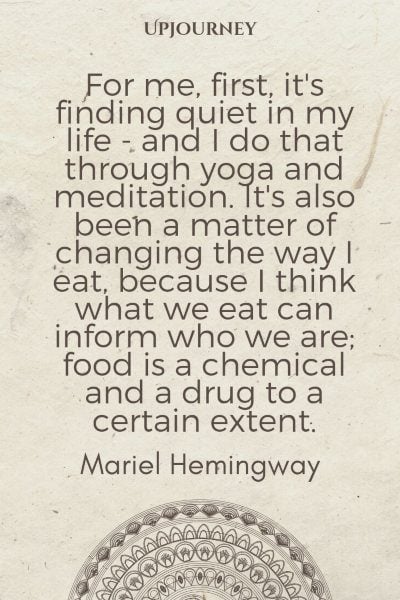 61. “Any spirituality can be enhanced with the practice or study of yoga.” – Christy Turlington

64. “Yoga changed my life. I go between 4 and 6 times a week. It’s incredibly grounding and an intense level of focus.” – Katharine Towne

66. “I love yoga, but the namaste thing only takes you so far.” – Jillian Michaels

67. “Yoga disciplines both the mind and the souls and not just your body. It helps me in having a constant positive outlook in life. I would love my family to adopt this form of fitness as well.” – Jacqueline Fernandez

68. “Yoga is at the core of my health and wellness routine; even if it’s only for 10 to 15 minutes I find it helps me to re-center and to focus as well as improve my overall core strength.” – Miranda Kerr

69. “Yoga gave me the ability to calm down.” – Christy Turlington 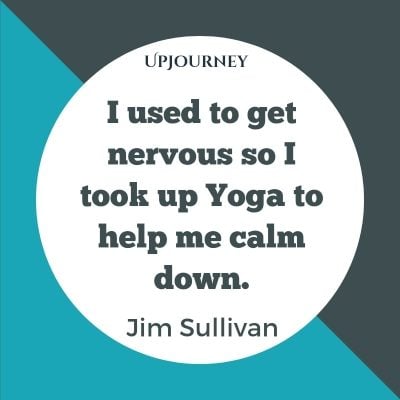 71. “I wanted to share the experience of how yoga and meditation have transformed my life, how they have enabled me to observe who I am, first in my body, and then emotionally, and on to a kind of spiritual path.” – Mariel Hemingway

72. “Yoga puts me in a place that is a little bit less about doing and more about being, which enables me, in fact, to do more.” – Christy Turlington

73. “A lot of people have questioned how yoga and their own spiritual beliefs can come together. Yoga actually pre-dates religion.” – Christy Turlington

74. “Yoga’s hard for me, but I know you can really feel the difference when you do it consistently. I’d rather be playing basketball.” – Chris Noth

75. “I mean the whole thing about meditation and yoga is about connecting to the higher part of yourself, and then seeing that every living thing is connected in some way.” – Gillian Anderson

76. “I guarantee you, yoga will compete with computers, music, sports, automobiles, the drug industry. Yoga will take over the world!” – Bikram Choudhury