No one wants to be betrayed. Yet at one point in our lives, it can happen. Betrayal can be one of the most painful experiences anyone can go through. It is heartbreaking and traumatizing.

May it be a cheating partner or a backstabbing friend, betrayal comes in many forms, and it always hurts. However, that doesn’t mean the world has ended. You can get through it.

We have collected some of the most relatable betrayal quotes and sayings that may help ease the pain and find comfort through these selections.

1. “Betrayal is the only truth that sticks.” — Arthur Miller 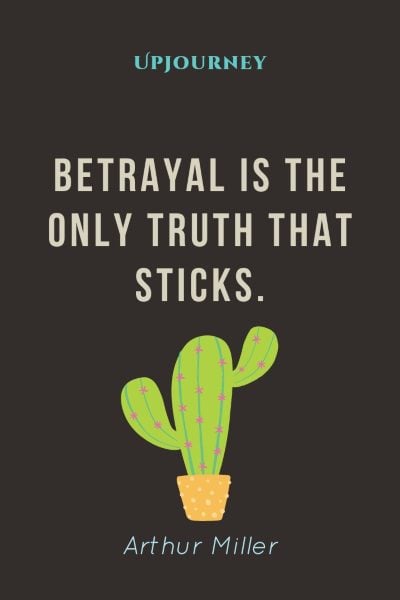 2. “The betrayal of trust carries a heavy taboo.” — Aldrich Ames

3. “The fear really hits you. That’s what you feel first. And then it’s the anger and frustration. Part of the problem is how little we understand about the ultimate betrayal of the body when it rebels against itself.” — Charles Bronson

4. “Let’s say a Soviet exchange student back in the ’70s would go back and tell the KGB about people and places and things that he’d seen and done and been involved with. This is not really espionage there’s no betrayal of trust.” — Aldrich Ames

5. “When you’re out of sight for as long as I was, there’s a funny feeling of betrayal that comes over people when they see you again.” — Esther Williams

6. “He that has eyes to see and ears to hear may convince himself that no mortal can keep a secret. If his lips are silent, he chatters with his fingertips; betrayal oozes out of him at every pore.” — Sigmund Freud

7. “We have to distrust each other. It is our only defense against betrayal.” — Tennessee Williams

8. “Deep down, my mom had long suspected I was gay… Much of her anger and hurt came from her sense of betrayal that she was the last to be told.” — Chastity Bono

10. “No failure in America, whether of love or money, is ever simple; it is always a kind of betrayal, of a mass of shadowy, shared hopes.” — Greil Marcus

11. “Love is whatever you can still betray. Betrayal can only happen if you love.” — John le Carre 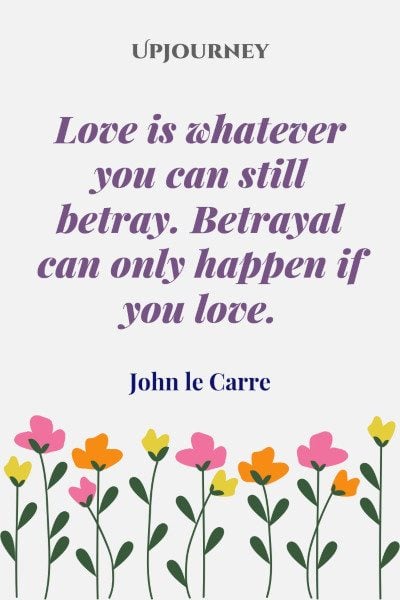 12. “Love never dies a natural death. It dies because we don’t know how to replenish it’s source. It dies of blindness and errors and betrayals. It dies of illness and wounds; it dies of weariness, of witherings, of tarnishings.” — Anais Nin

13. “Part of the problem is how little we understand about the ultimate betrayal of the body when it rebels against itself. You always worry about charlatans. We found that specialists did not know as much as we thought.” — Charles Bronson

14. “There are only really a few stories to tell in the end, and betrayal and the failure of love is one of those good stories to tell.” — Sean Lennon

15. “A national legal organization is giving very serious thought to using The Betrayal of America as a legal basis for asking the House Judiciary Committee to institute impeachment proceedings against these five justices.” — Vincent Bugliosi

16. “Is it possible to succeed without any act of betrayal?” — Jean Renoir

17. “Tragedy in life normally comes with betrayal and compromise, and trading on your integrity and not having dignity in life. That’s really where failure comes.” — Tom Cochrane

18. “You see that’s what I think is such a terrible, terrible betrayal, the trust that people have in government.” — Ralph Steadman

19. “Anyone who hasn’t experienced the ecstasy of betrayal knows nothing about ecstasy at all.” — Jean Genet

20. “No failure in America, whether of love or money, is ever simple it is always a kind of betrayal, of a mass of shadowy, shared hopes.” — Greil Marcus

21. “I have never known a more vulgar expression of betrayal and deceit.” — Lucien Bouchard 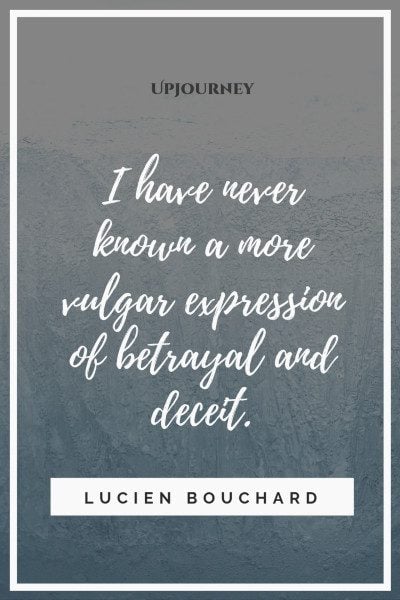 22. “Naturally, when one makes progressive steps, there may be some who see it as a betrayal of their goals and interests.” — Louis Farrakhan

23. “Espionage, for the most part, involves finding a person who knows something or has something that you can induce them secretly to give to you. That almost always involves a betrayal of trust.” — Aldrich Ames

25. “Most of us regard good luck as our right, and bad luck as a betrayal of that right.” — William Feather