Edmund Burke was a philosopher and statesman who served in the British parliament from 1765 to 1794. He is regarded as the founder of modern conservatism. Born in Dublin, Ireland, Burke was the son of a solicitor. He went to study law in London. However, Burke soon lost interest and pursued a literary and political career.

Before and during in office, Burke published several writings on satire and theory. A Philosophical Enquiry into the Origin of Our Ideas of the Sublime and Beautiful gave Burke a reputation in England, catching the attention of other philosophers like Immanuel Kant and Denis Diderot.

As a statesman, Burke believed in the importance of religion to establish a good and moral society. He supported Catholic emancipation, Warren Hasting’s impeachment, and his opposition to the French Revolution.

We have collected several of the most notable Edmund Burke quotes and sayings that reveal his thoughts on government, laws, religion, liberty, tyranny, and many more.

1. “Politics and the pulpit are terms that have little agreement.”

2. “It is ordained in the eternal constitution of things, that men of intemperate minds cannot be free. Their passions forge their fetters.”

3. “Nothing turns out to be so oppressive and unjust as a feeble government.” 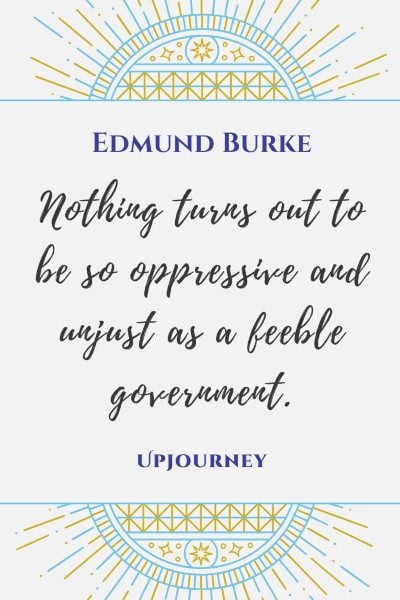 4. “Justice is itself the great standing policy of civil society; and any eminent departure from it, under any circumstances, lies under the suspicion of being no policy at all.”

5. “Magnanimity in politics is not seldom the truest wisdom; and a great empire and little minds go ill together.”

7. “All government, indeed every human benefit and enjoyment, every virtue, and every prudent act, is founded on compromise and barter.”

8. “In a democracy, the majority of the citizens is capable of exercising the most cruel oppressions upon the minority.”

9. “Circumstances give in reality to every political principle its distinguishing color and discriminating effect. The circumstances are what render every civil and political scheme beneficial or noxious to mankind.”

10. “A disposition to preserve, and an ability to improve, taken together, would be my standard of a statesman.”

1. “Bad laws are the worst sort of tyranny.”

2. “We must all obey the great law of change. It is the most powerful law of nature.” 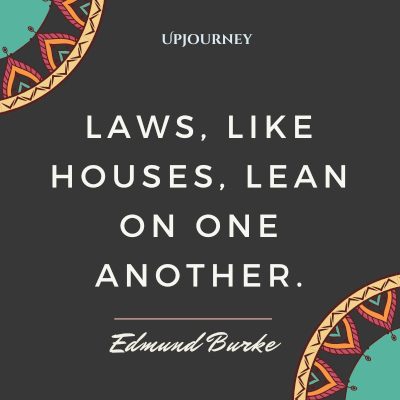 4. “People crushed by laws, have no hope but to evade power. If the laws are their enemies, they will be enemies to the law; and those who have most to hope and nothing to lose will always be dangerous.”

5. “All human laws are, properly speaking, only declaratory; they have no power over the substance of original justice.”

6. “There is but one law for all, namely that law which governs all law, the law of our Creator, the law of humanity, justice, equity – the law of nature and of nations.”

1. “Superstition is the religion of feeble minds.”

2. “Religion is essentially the art and the theory of the remaking of man. Man is not a finished creation.”

3. “Religious persecution may shield itself under the guise of a mistaken and over-zealous piety.”

4. “Nothing is so fatal to religion as indifference.” 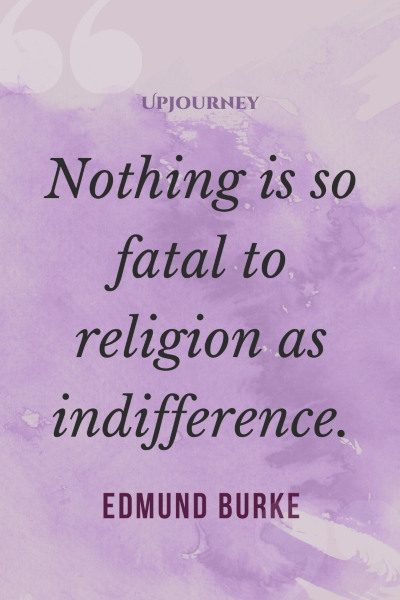 1. “The true danger is when liberty is nibbled away, for expedience, and by parts.”

2. “But what is liberty without wisdom, and without virtue? It is the greatest of all possible evils; for it is folly, vice, and madness, without tuition or restraint.”

3. “Whenever a separation is made between liberty and justice, neither, in my opinion, is safe.”

4. “The people never give up their liberties but under some delusion.”

5. “The effect of liberty to individuals is that they may do what they please: we ought to see what it will please them to do, before we risk congratulations.”

7. “Liberty must be limited in order to be possessed.” 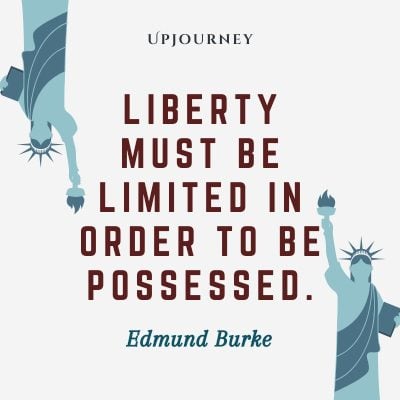 2. “Whilst shame keeps its watch, virtue is not wholly extinguished in the heart; nor will moderation be utterly exiled from the minds of tyrants.”

3. “The tyranny of a multitude is a multiplied tyranny.”

4. “All tyranny needs to gain a foothold is for people of good conscience to remain silent.”

5. “Kings will be tyrants from policy, when subjects are rebels from principle.” 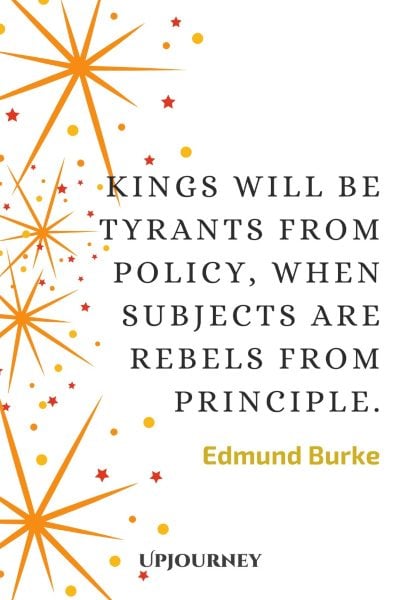 3. “The greater the power, the more dangerous the abuse.”

4. “Poetry is the art of substantiating shadows, and of lending existence to nothing.”

5. “Ambition can creep as well as soar.”

6. “Applause is the spur of noble minds, the end and aim of weak ones.”

7. “Nobility is a graceful ornament to the civil order. It is the Corinthian capital of polished society.”

8. “He had no failings which were not owing to a noble cause; to an ardent, generous, perhaps an immoderate passion for fame; a passion which is the instinct of all great souls.”

9. “One that confounds good and evil is an enemy to good.”

10. “The arrogance of age must submit to be taught by youth.” 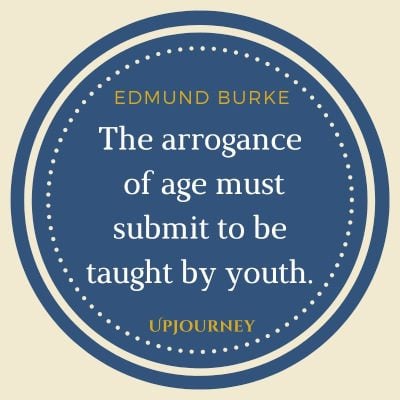 11. “I have never yet seen any plan which has not been mended by the observations of those who were much inferior in understanding to the person who took the lead in the business.”

12. “There is a boundary to men’s passions when they act from feelings; but none when they are under the influence of imagination.”

13. “If the people are happy, united, wealthy, and powerful, we presume the rest. We conclude that to be good from whence good is derived.”

14. “Mere parsimony is not economy. Expense, and great expense, may be an essential part in true economy.”

15. “It is the interest of the commercial world that wealth should be found everywhere.”

16. “Under the pressure of the cares and sorrows of our mortal condition, men have at all times, and in all countries, called in some physical aid to their moral consolations – wine, beer, opium, brandy, or tobacco.”

18. “Free trade is not based on utility but on justice.”

19. “Hypocrisy can afford to be magnificent in its promises, for never intending to go beyond promise, it costs nothing.”

20. “People will not look forward to posterity, who never look backward to their ancestors.” 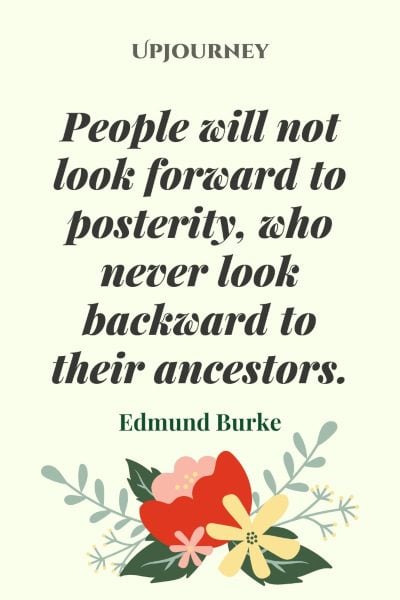 22. “Society can overlook murder, adultery or swindling; it never forgives preaching of a new gospel.”

23. “It is not what a lawyer tells me I may do; but what humanity, reason, and justice tell me I ought to do.”

24. “To read without reflecting is like eating without digesting.”

26. “The only thing necessary for the triumph of evil is for good men to do nothing.”

28. “The most important of all revolutions, a revolution in sentiments, manners and moral opinions.”

29. “In effect, to follow, not to force the public inclination; to give a direction, a form, a technical dress, and a specific sanction, to the general sense of the community, is the true end of legislature.” 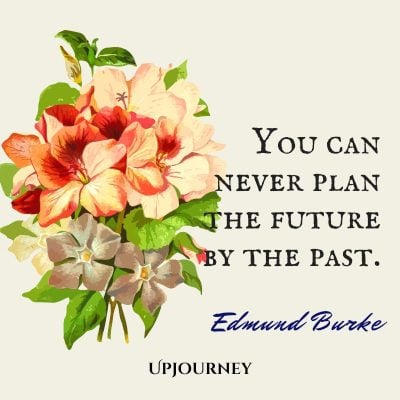 32. “Beauty in distress is much the most affecting beauty.”

33. “The person who grieves suffers his passion to grow upon him; he indulges it, he loves it; but this never happens in the case of actual pain, which no man ever willingly endured for any considerable time.”

35. “He that wrestles with us strengthens our nerves and sharpens our skill. Our antagonist is our helper.”

36. “The traveller has reached the end of the journey!”

37. “Your representative owes you, not his industry only, but his judgment; and he betrays instead of serving you if he sacrifices it to your opinion.”

38. “Education is the cheap defense of nations.”

39. “Example is the school of mankind, and they will learn at no other.”

40. “Good order is the foundation of all things.” 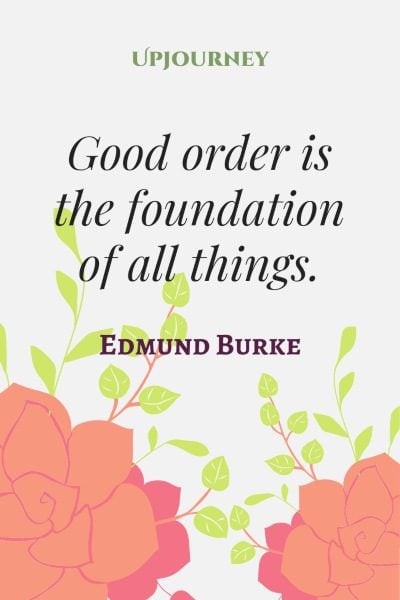 41. “Custom reconciles us to everything.”

42. “Passion for fame: A passion which is the instinct of all great souls.”

43. “Sin has many tools, but a lie is the handle which fits them all.”

44. “Beauty is the promise of happiness.”

45. “A spirit of innovation is generally the result of a selfish temper and confined views. People will not look forward to posterity, who never look backward to their ancestors.”

46. “But the age of chivalry is gone. That of sophisters, economists, and calculators has succeeded; and the glory of Europe is extinguished forever.”

50. “The first and simplest emotion which we discover in the human mind, is curiosity.” 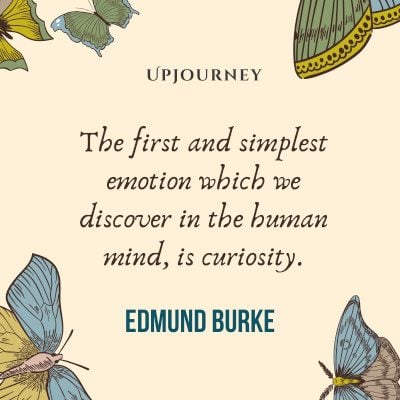 51. “When the leaders choose to make themselves bidders at an auction of popularity, their talents, in the construction of the state, will be of no service. They will become flatterers instead of legislators; the instruments, not the guides, of the people.”

52. “If we command our wealth, we shall be rich and free; if our wealth commands us, we are poor indeed.”

53. “It is, generally, in the season of prosperity that men discover their real temper, principles, and designs.”

54. “Our patience will achieve more than our force.”

55. “Those who don’t know history are destined to repeat it.”

56. “It is a general popular error to suppose the loudest complainers for the public to be the most anxious for its welfare.”

57. “All that’s necessary for the forces of evil to win in the world is for enough good men to do nothing.”

58. “If you can be well without health, you may be happy without virtue.”

59. “No passion so effectually robs the mind of all its powers of acting and reasoning as fear.”

60. “Frugality is founded on the principal that all riches have limits.” 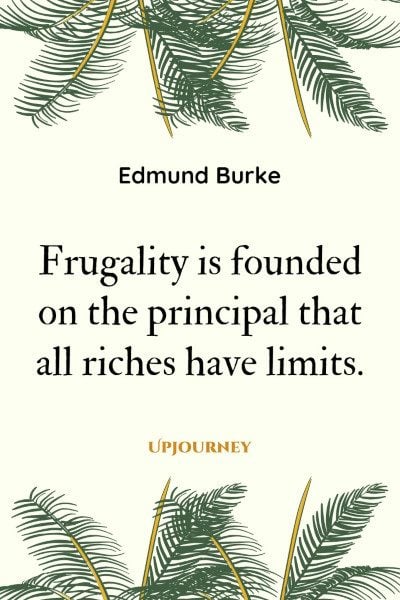 61. “When bad men combine, the good must associate; else they will fall one by one, an unpitied sacrifice in a contemptible struggle.”

62. “Nobody made a greater mistake than he who did nothing because he could do only a little.”

63. “Falsehood is a perennial spring.”

64. “Whenever our neighbor’s house is on fire, it cannot be amiss for the engines to play a little on our own.”

65. “Flattery corrupts both the receiver and the giver.”

66. “I venture to say no war can be long carried on against the will of the people.”

If you’d like to learn more from Edmund Burke’s writings, we suggest you read Reflections on the Revolution in France and Other Writings.