Nowadays, superhero movies are part of the mainstream media. Everyone knows of Captain America or Wonder Woman. But in real life, heroes don’t have super strength or receive extraordinary abilities from the Greek gods. Nor do they need any of those to be called heroes.

In real life, heroes aren’t parading in skintight suits or flying around with capes. They look like us. There are heroes all around us; they might be people you know like your mother or brother or your teacher. It might even be you.

Bring out the hero in you as you read through the best heroes quotes and sayings that also include lines about heroism and heroic acts.

1. “Heroes are not known by the loftiness of their carriage; the greatest braggarts are generally the merest cowards.” — Jean-Jacques Rousseau

3. “Hard times don’t create heroes. It is during the hard times when the ‘hero’ within us is revealed.” — Bob Riley 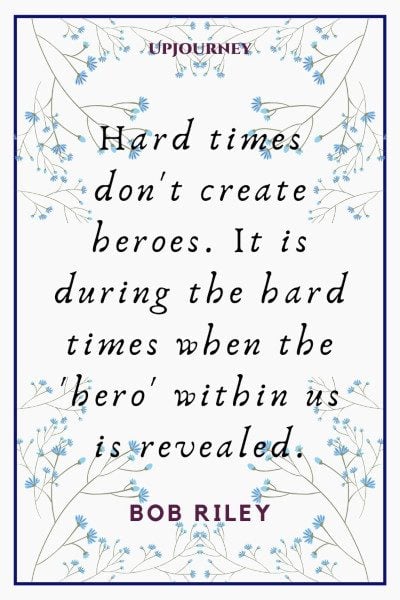 4. “A hero is someone who has given his or her life to something bigger than oneself.” — Joseph Campbell

5. “You know, heroes are ordinary people that have achieved extraordinary things in life.” — Dave Winfield

6. “I think heroes are the people that go into houses when they’re on fire and save people in hospitals.” — Luke Evans

8. “Heroes in drama are people who try hard to reach a virtuous ideal. And whether they succeed or fail really doesn’t matter – it’s the trying that counts.” — Aaron Sorkin

10. “Heroes may not be braver than anyone else. They’re just braver five minutes longer.” — Ronald Reagan

11. “All interesting heroes have an Achilles’ heel.” — Jo Nesbo

13. “A hero is an ordinary individual who finds the strength to persevere and endure in spite of overwhelming obstacles.” — Christopher Reeve 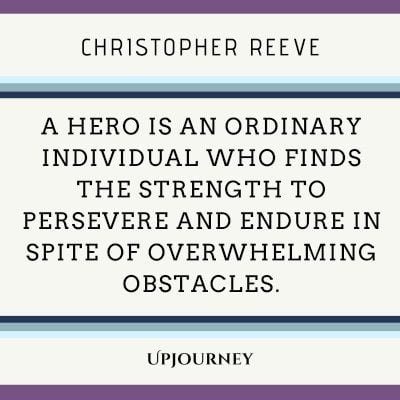 15. “Being a hero is about the shortest-lived profession on earth.” — Will Rogers

16. “It takes a hero to be one of those men who goes into battle.” — Norman Schwarzkopf

17. “Nobody is a villain in their own story. We’re all the heroes of our own stories.” — George R. R. Martin

18. “Heroes represent the best of ourselves, respecting that we are human beings. A hero can be anyone from Gandhi to your classroom teacher, anyone who can show courage when faced with a problem. A hero is someone who is willing to help others in his or her best capacity.” — Ricky Martin

19. “Heroes are created by popular demand, sometimes out of the scantiest materials, or none at all.” — Gerald W. Johnson

20. “Aspire rather to be a hero than merely appear one.” — Baltasar Gracian

23. “Heroes need monsters to establish their heroic credentials. You need something scary to overcome.” — Margaret Atwood 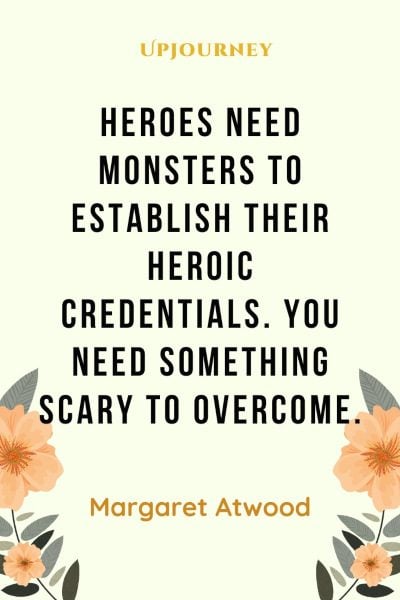 24. “A hero is someone who understands the responsibility that comes with his freedom.” — Bob Dylan

27. “Heroes are people who rise to the occasion and slip quietly away.” — Tom Brokaw

29. “It was just the thrill of a lifetime. Brando and Hackman were two of my heroes.” — Richard Donner

31. “What with making their way and enjoying what they have won, heroes have no time to think. But the sons of heroes – ah, they have all the necessary leisure.” — Aldous Huxley

32. “Perfect heroes are cool, but no one can really empathize or identify with them.” — Masashi Kishimoto

33. “As you get older it is harder to have heroes, but it is sort of necessary.” — Ernest Hemingway 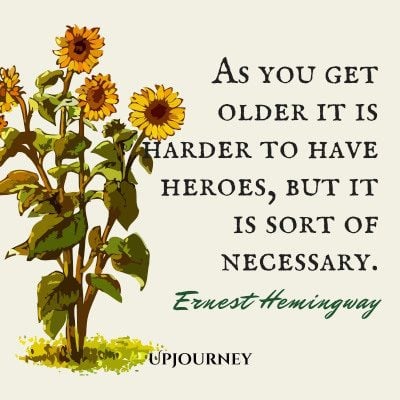 35. “There’s something so accessible about heroes who have faults.” — Laura Dern

36. “Women are the real superheroes because they’re not just working. They have a life and everything.” — Vanessa Paradis

37. “We can’t all be heroes, because somebody has to sit on the curb and applaud when they go by.” — Will Rogers

38. “A hero is someone we can admire without apology.” — Kitty Kelley

39. “I think even a hero is someone who has sort of the flaw or imperfection of character. I remember Alice Walker saying that once – she’d written a novel about a civil rights hero, and it was someone who had this flaw, this central flaw.” — Hector Tobar

40. “A hero is no braver than an ordinary man, but he is brave five minutes longer.” — Ralph Waldo Emerson

41. “This thing of being a hero, about the main thing to it is to know when to die.” — Will Rogers

42. “A hero is somebody who is selfless, who is generous in spirit, who just tries to give back as much as possible and help people. A hero to me is someone who saves people and who really deeply cares.” — Debi Mazar

43. “Real heroes are all around us and uncelebrated.” — Peter Capaldi 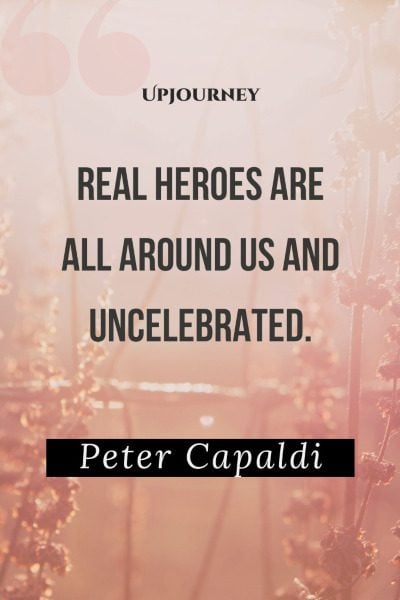 45. “Books are those faithful mirrors that reflect to our mind the minds of sages and heroes.” — Edward Gibbon

48. “A hero is someone right who doesn’t change.” — George Foreman

49. “The hero is one who kindles a great light in the world, who sets up blazing torches in the dark streets of life for men to see by.” — Felix Adler

51. “Heroes aren’t supposed to do bad things. That’s what villains are for. So either the good supersedes the bad, or the bad makes it impossible to remember the good. We don’t like it when such duality exists in one person. We don’t want to know our heroes are human.” — LZ Granderson

52. “A hero holds purposes appropriate to man and is, therefore, a thinker.” — Andrew Bernstein 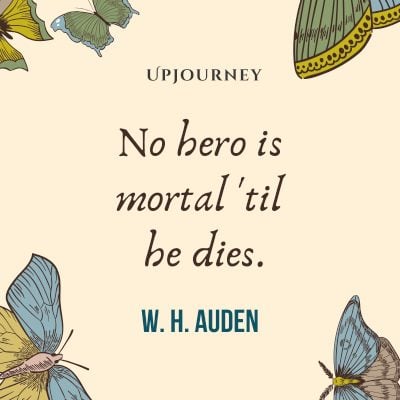 54. “I think heroes who are not flawed are not believable.” — James McBride

55. “Heroes are people who are all good with no bad in them. That’s the way I always saw Joe DiMaggio. He was beyond question one of the greatest players of the century.” — Mickey Mantle

56. “Heroes are ordinary people who make themselves extraordinary.” — Gerard Way

60. “A hero is someone who, in spite of weakness, doubt or not always knowing the answers, goes ahead and overcomes anyway.” — Christopher Reeve

61. “My heroes are and were my parents. I can’t see having anyone else as my heroes.” — Michael Jordan

63. “Heroes have always served as a reflection of their times, a template of who we are and what we want to be.” — David Grann 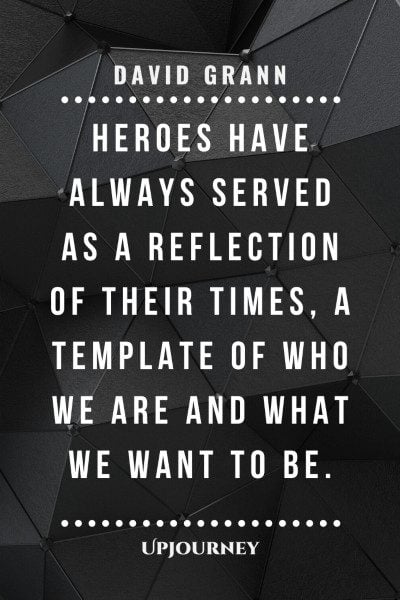 64. “In war the heroes always outnumber the soldiers ten to one.” — H. L. Mencken

65. “After all, the ordinary hero hiding in each of us is often the most powerful catalyst for change.” — Tate Taylor

66. “A hero is somebody who voluntarily walks into the unknown.” — Tom Hanks

67. “What is a hero without love for mankind.” — Doris Lessing

68. “Heroes are those who can somehow resist the power of the situation and act out of noble motives, or behave in ways that do not demean others when they easily can.” — Philip Zimbardo

69. “You cannot be a hero without being a coward.” — George Bernard Shaw

70. “A hero has faced it all: he need not be undefeated, but he must be undaunted.” — Andrew Bernstein

71. “It is surmounting difficulties that makes heroes.” — Louis Pasteur

72. “It was never really my choice to be an action heroine.” — Izabella Scorupco

73. “A hero cannot be a hero unless in a heroic world.” — Nathaniel Hawthorne 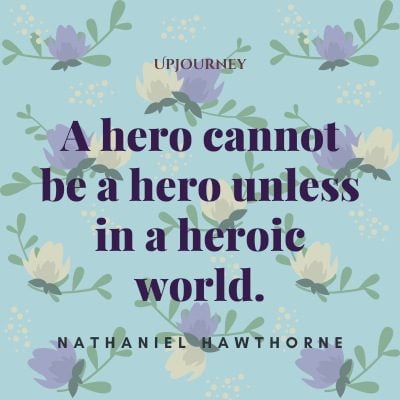 74. “Heroes always make the right decision; I find that seldom happens in my life.” — Judd Nelson

75. “Heroes, whatever high ideas we may have of them, are mortal and not divine. We are all as God made us and many of us much worse.” — John Osborne

76. “The real hero is always a hero by mistake he dreams of being an honest coward like everybody else.” — Umberto Eco

77. “If we mean to have heroes, statesmen and philosophers, we should have learned women.” — Abigail Adams

78. “Without heroes, we are all plain people and don’t know how far we can go.” — Bernard Malamud

80. “A perfect hero is about as boring as a perfect marriage.” — Michael Robotham

1. “When the will defies fear, when duty throws the gauntlet down to fate, when honor scorns to compromise with death – that is heroism.” — Robert Green Ingersoll

2. “Heroism on command, senseless violence, and all the loathsome nonsense that goes by the name of patriotism – how passionately I hate them!” — Albert Einstein

3. “Heroism is not only in the man, but in the occasion.” — Calvin Coolidge 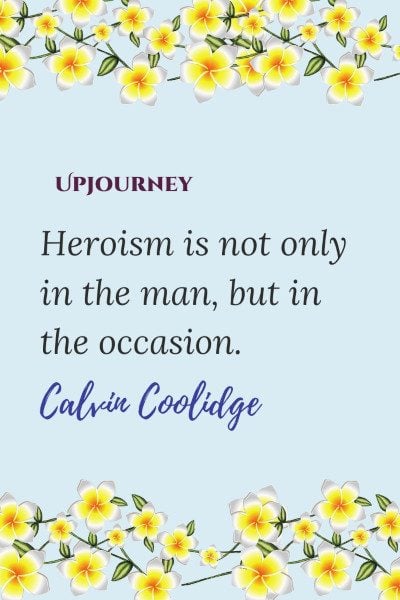 4. “Extreme heroism springs from something that no scientific theory can fully explain; it’s an illogical impulse that flies in the face of biology, psychology, actuarial statistics, and basic common sense.” — Christopher McDougall

5. “Faith is the heroism of the intellect.” — Charles Henry Parkhurst

6. “The opportunities for heroism are limited in this kind of world: the most people can do is sometimes not to be as weak as they’ve been at other times.” — Angus Wilson

7. “There is a certain enthusiasm in liberty, that makes human nature rise above itself, in acts of bravery and heroism.” — Alexander Hamilton

8. “The greatest obstacle to being heroic is the doubt whether one may not be going to prove one’s self a fool the truest heroism is to resist the doubt and the profoundest wisdom, to know when it ought to be resisted, and when it be obeyed.” — Nathaniel Hawthorne

12. “It is impossible to strive for the heroic life. The title of hero is bestowed by the survivors upon the fallen, who themselves know nothing of heroism.” — Johan Huizinga 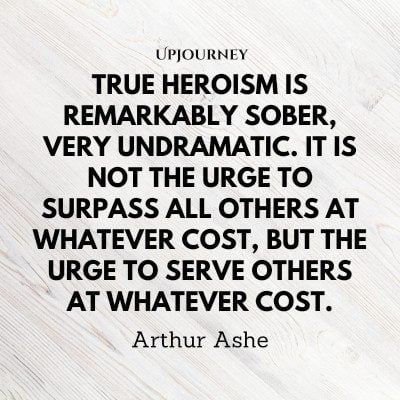 14. “The world’s battlefields have been in the heart chiefly; more heroism has been displayed in the household and the closet, than on the most memorable battlefields in history.” — Henry Ward Beecher

15. “It is not tolerable, it is not possible, that from so much death, so much sacrifice and ruin, so much heroism, a greater and better humanity shall not emerge.” — Charles de Gaulle

16. “Heroism is endurance for one moment more.” — George F. Kennan

18. “You can find heroism everyday, like guys working terrible jobs because they’ve got to support their families. Or as far as humor, the things I see on the job, on the street, are far funnier than anything you’ll ever see on TV.” — Harvey Pekar

19. “As a rule, all heroism is due to a lack of reflection, and thus it is necessary to maintain a mass of imbeciles. If they once understand themselves the ruling men will be lost.” — Ernest Renan

1. “Some days it is a heroic act just to refuse the paralysis of fear and straighten up and step into another day.” — Edward Albert

2. “Anyone can be heroic from time to time, but a gentleman is something you have to be all the time.” — Luigi Pirandello

3. “True heroics, obviously, is not the absence of fear, but having that fear and doing something anyway.” — Martin Freeman

4. “The simple act of caring is heroic.” — Edward Albert 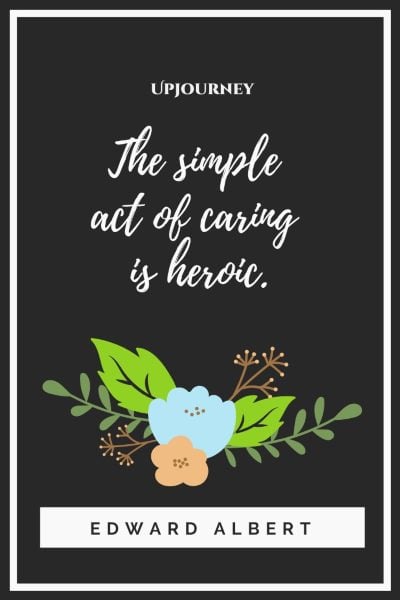 5. “I think it is rather heroic to go into a war zone where everyone is trying to kill you, and you have no way of shooting back.” — Kerry Greenwood

6. “People have their complexities. They have their heroic moments and their villainous moments, too.” — Ryan Reynolds

7. “You can’t make accommodations in crucial situations and be heroic.” — Alan Furst

8. “The most heroic thing you can do is tell someone that you love them.” — Jacques Audiard

9. “The most heroic word in all languages is revolution.” — Eugene V. Debs