Sir Winston Leonard Spencer-Churchill is one of the most widely respected and iconic leaders in world history.

Aside from being a world-known British politician, Churchill was also an army officer, artist, and writer. Some of his best-known paintings are oil-based impressionist landscapes as well as portraits. He also wrote books about his journey during the world war and about his campaigns.

As a wartime Prime Minister of the United Kingdom (1940-1945, 1951-1955), his conviction, courage, and perseverance led Britain to victory against Hitler’s Germany in the Second World War. Churchill’s passion and spirit quite literally altered the course of history.

Widely recognized as one of the 20th century’s most notable figures, Churchill is remembered as a triumphant wartime leader who played a vital role in countering the spread of fascism by defending democracy. Churchill was also renowned for his wit and wisdom and left a treasure of quotes and sayings that still motivate us to this day with their accuracy and heartfelt life lessons.

Here are Top 85 Winston Churchill Quotes about that will inspire you to keep fighting and never give up in life.

1. “I am never going to have anything more to do with politics or politicians. When this war is over I shall confine myself entirely to writing and painting.”

2. “Politics are very much like war. We may even have to use poison gas at times.”

3. “The power of man has grown in every sphere, except over himself.”

4. “For good or for ill, air mastery is today the supreme expression of military power and fleets and armies, however vital and important, must accept a subordinate rank.”

5. “Politics is not a game. It is an earnest business.” 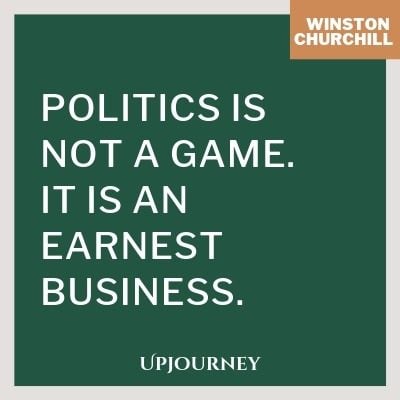 6. “Politics is the ability to foretell what is going to happen tomorrow, next week, next month and next year. And to have the ability afterward to explain why it didn’t happen.”

7. “It is more agreeable to have the power to give than to receive.”

8. “Nothing can be more abhorrent to democracy than to imprison a person or keep him in prison because he is unpopular. This is really the test of civilization.”

9. “In war, you can only be killed once, but in politics, many times.”

10. “The best argument against democracy is a five-minute conversation with the average voter.”

11. “It has been said that democracy is the worst form of government except all the others that have been tried.”

12. “If you have ten thousand regulations you destroy all respect for the law.”

13. “The power of an air force is terrific when there is nothing to oppose it.”

14. “Politics is almost as exciting as war and quite as dangerous.”

15. “Healthy citizens are the greatest asset any country can have.”

2. “In war as in life, it is often necessary when some cherished scheme has failed, to take up the best alternative open, and if so, it is folly not to work for it with all your might.”

4. “When you are winning a war almost everything that happens can be claimed to be right and wise.”

5. “War is mainly a catalog of blunders.”

7. “In wartime, truth is so precious that she should always be attended by a bodyguard of lies.”

8. “When the war of the giants is over the wars of the pygmies will begin.”

9. “A prisoner of war is a man who tries to kill you and fails, and then asks you not to kill him.” 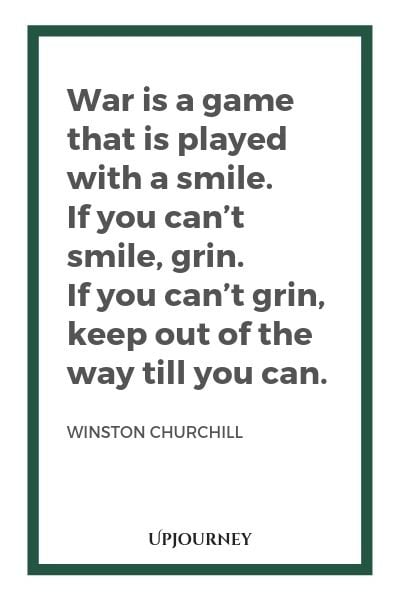 11. “Never in the field of human conflict was so much owed by so many to so few.”

1. “Success consists of going from failure to failure without loss of enthusiasm.”

2. “Success is not final, failure is not fatal: it is the courage to continue that counts.” 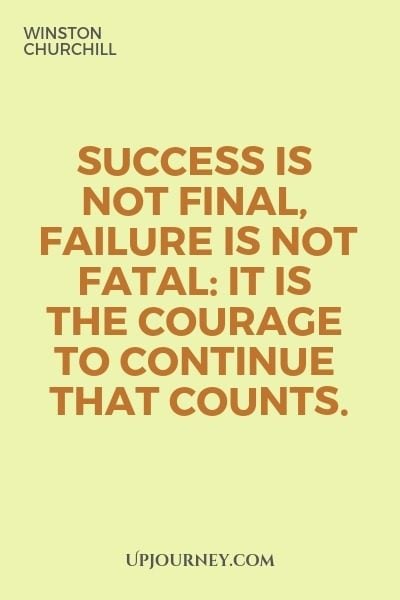 3. “It is no use saying, ‘We are doing our best.’ You have got to succeed in doing what is necessary.”

4. “Courage is rightly esteemed the first of human qualities… because it is the quality which guarantees all others.”

5. “All the great things are simple, and many can be expressed in a single word: freedom, justice, honor, duty, mercy, hope.”

1. “It is a mistake to look too far ahead. Only one link of the chain of destiny can be handled at a time.” 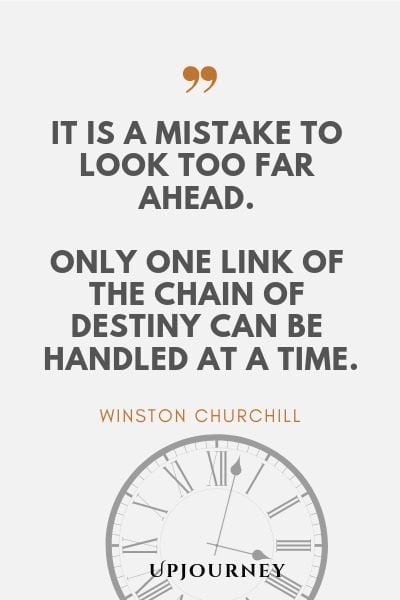 2. “No idea is so outlandish that it should not be considered with a searching but at the same time a steady eye.”

3. “This is no time for ease and comfort. It is time to dare and endure.”

4. “If you have an important point to make, don’t try to be subtle or clever. Use a pile driver. Hit the point once. Then come back and hit it again. Then hit it a third time – a tremendous whack.”

5. “When I am abroad, I always make it a rule never to criticize or attack the government of my own country. I make up for lost time when I come home.”

6. “One does not leave a convivial party before closing time.”

7. “Man will occasionally stumble over the truth, but most of the time he will pick himself up and continue on.”

1. “The short words are best, and the old words are the best of all.”

2. “Continuous effort – not strength or intelligence – is the key to unlocking our potential.”

3. “The truth is incontrovertible. Malice may attack it, ignorance may deride it, but in the end, there it is.” 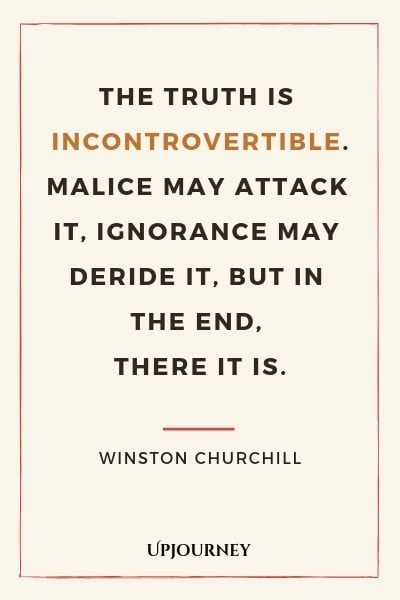 4. “Short words are best and the old words when short are best of all.”

5. “Nothing in life is so exhilarating as to be shot at without result.”

6. “History will be kind to me for I intend to write it.”

8. “A lie gets halfway around the world before the truth has a chance to get its pants on.”

9. “I always seem to get inspiration and renewed vitality by contact with this great novel land of yours which sticks up out of the Atlantic.”

10. “Study history, study history. In history lies all the secrets of statecraft.”

11. “History is written by the victors.”

12. “I am prepared to meet my Maker. Whether my Maker is prepared for the great ordeal of meeting me is another matter.” 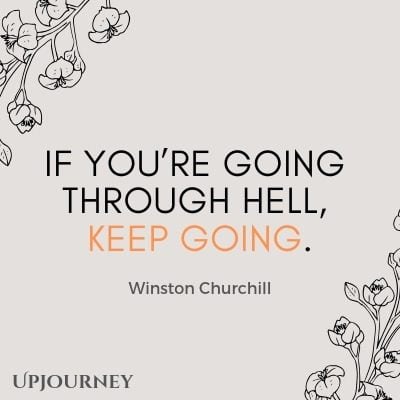 17. “A fanatic is one who can’t change his mind and won’t change the subject.”

18. “I am always ready to learn although I do not always like being taught.”

19. “Without tradition, art is a flock of sheep without a shepherd. Without innovation, it is a corpse.”

22. “My most brilliant achievement was my ability to be able to persuade my wife to marry me.”

23. “Men occasionally stumble over the truth, but most of them pick themselves up and hurry off as if nothing had happened.”

24. “The great defense against the air menace is to attack the enemy’s aircraft as near as possible to their point of departure.”

25. “No part of the education of a politician is more indispensable than the fighting of elections.”

26. “My rule of life prescribed as an absolutely sacred rite smoking cigars and also the drinking of alcohol before, after and if need be during all meals and in the intervals between them.”

27. “I am easily satisfied with the very best.” 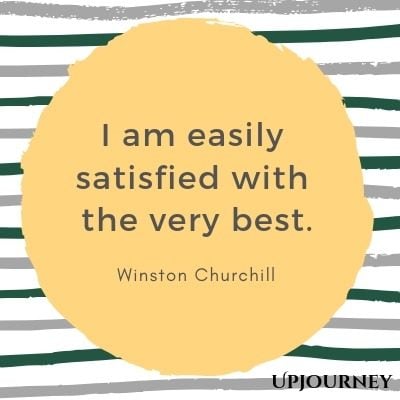 28. “It is a good thing for an uneducated man to read books of quotations.”

29. “We have always found the Irish a bit odd. They refuse to be English.”

31. “These are not dark days: these are great days – the greatest days our country has ever lived.”

32. “We shape our buildings thereafter they shape us.”

33. “We occasionally stumble over the truth but most of us pick ourselves up and hurry off as if nothing had happened.”

35. “If we open a quarrel between past and present, we shall find that we have lost the future.”

36. “You have enemies? Good. That means you’ve stood up for something, sometime in your life.”

37. “Attitude is a little thing that makes a big difference.” 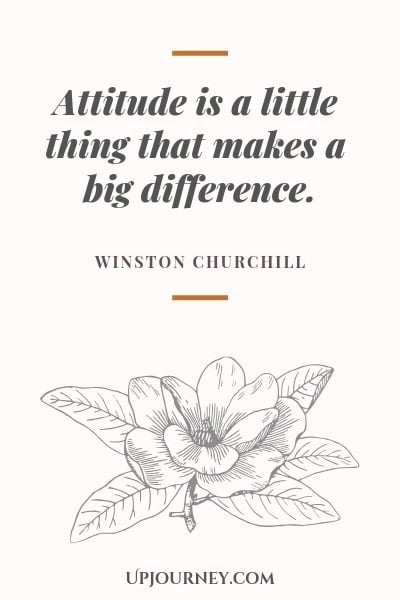 38. “For my part, I consider that it will be found much better by all parties to leave the past to history, especially as I propose to write that history myself.”

39. “In the course of my life, I have often had to eat my words, and I must confess that I have always found it a wholesome diet.”

40. “We do not covet anything from any nation except their respect.”

41. “Broadly speaking, the short words are the best, and the old words best of all.”

42. “I am certainly not one of those who need to be prodded. In fact, if anything, I am the prod.”

43. “I may be drunk, Miss, but in the morning I will be sober and you will still be ugly.” 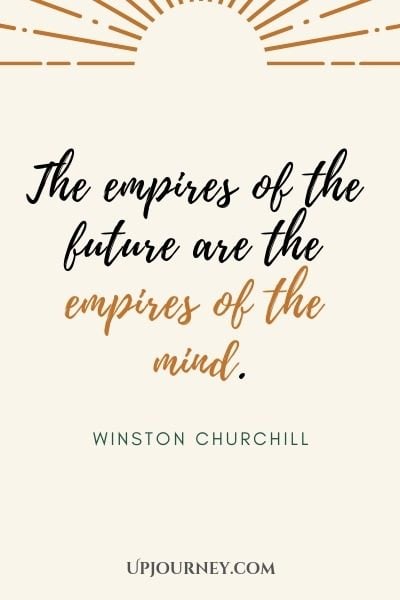 45. “The reserve of modern assertions is sometimes pushed to extremes, in which the fear of being contradicted leads the writer to strip himself of almost all sense and meaning.”

46. “Socialism is a philosophy of failure, the creed of ignorance, and the gospel of envy, its inherent virtue is the equal sharing of misery.”

To know more about the life, writings, and various works of Winston Churchill, we would suggest you read Churchill: The Power of Words to gain insight into his life journey and how he made his mark on the world.