One of the earliest things we learn as a child is, to be honest. Whenever we were caught in a lie, our parents always remind us to be accurate and to value their trust. No good parent would want their child to grow up a liar. Honesty must be practiced at all times.

If we lived in an honest world, corrupt politicians, cheating partners, and deceit wouldn’t exist. Trusting strangers wouldn’t be a risky activity, and we wouldn’t have to worry about swindlers and two-faced friends. Wouldn’t you prefer to live in that world?

Here we have collected several of the most famous and inspirational honesty quotes that will remind you why honesty is the best policy.

1. “The secret of life is honesty and fair dealing. If you can fake that, you’ve got it made.” — Groucho Marx

2. “I am afraid we must make the world honest before we can honestly say to our children that honesty is the best policy.” — George Bernard Shaw

3. “All stories should have some honesty and truth in them, otherwise you’re just playing about.” — Nigel Kneale 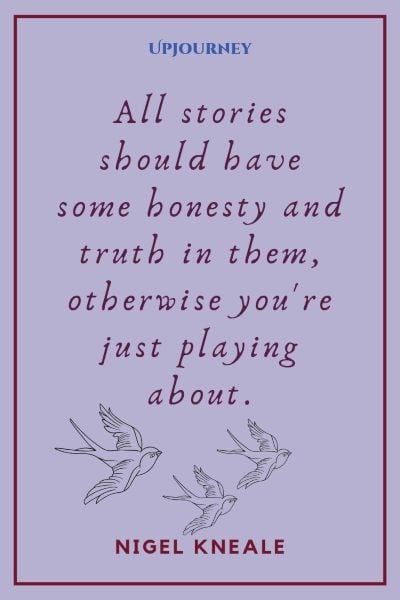 4. “I think the number one thing that I find important is the importance of honesty with your friends and your parents, if you can be. But I think that telling people how you really feel, being who you truly are, being safe and taking care of yourself is the most important thing.” — Emma Stone

5. “Men are able to trust one another, knowing the exact degree of dishonesty they are entitled to expect.” — Stephen Leacock

7. “Honesty is the cruelest game of all, because not only can you hurt someone – and hurt them to the bone – you can feel self-righteous about it at the same time.” — Dave Van Ronk

8. “With honesty of purpose, balance, a respect for tradition, courage, and, above all, a philosophy of life, any young person who embraces the historical profession will find it rich in rewards and durable in satisfaction.” — Samuel E. Morison

9. “I think my confidence stems from my honesty. I’m brutally honest – about everything and even myself. I tell it as I think it. I’m not politically correct. I’m definitely not diplomatic. I get bashed up for what I say, but I don’t know any other way.” — Alia Bhatt

10. “Your conscience is the measure of the honesty of your selfishness. Listen to it carefully.” — Richard Bach

12. “We learned about honesty and integrity – that the truth matters… that you don’t take shortcuts or play by your own set of rules… and success doesn’t count unless you earn it fair and square.” — Michelle Obama

13. “To make your children capable of honesty is the beginning of education.” — John Ruskin 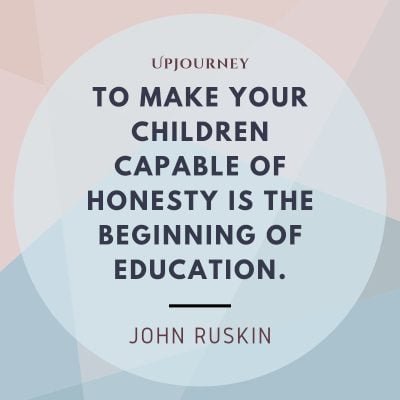 14. “Honesty is for the most part less profitable than dishonesty.” — Plato

15. “Honesty is the rarest wealth anyone can possess, and yet all the honesty in the world ain’t lawful tender for a loaf of bread.” — Josh Billings

16. “Truly, I would not hang a dog by my will, much more a man who hath any honesty in him.” — William Shakespeare

17. “A sarcastic person has a superiority complex that can be cured only by the honesty of humility.” — Lawrence G. Lovasik

18. “Even if you know that what you’ll say will hurt a woman’s feelings, I’ve learned that it’s better to be truthful with her than it is to cover up. Ultimate honesty is what a relationship is really about.” — Stephen Moyer

19. “If money, education, and honesty will not bring to me as much privilege, as much equality as they bring to any American citizen, then they are to me a curse, and not a blessing.” — John Hope

20. “Honesty is as rare as a man without self-pity.” — Stephen Vincent Benet

21. “Coming out is a means of redefining oneself, of claiming membership in a lifestyle and a social order with distinct values. Chief among these values is honesty.” — Lance Loud

23. “Honesty is the most single most important factor having a direct bearing on the final success of an individual, corporation, or product.” — Ed McMahon 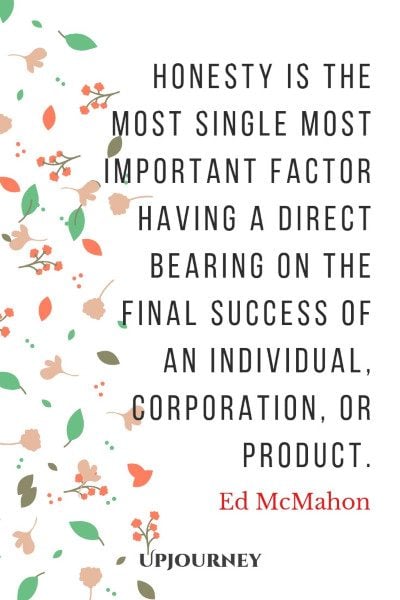 25. “The most important thing in acting is honesty. If you can fake that, you’ve got it made.” — George Burns

26. “I believe honesty comes across in music because for people that music isn’t just something to dance to. For people for whom music is something that they feel, they understand what I’m talking about.” — Willa Ford

27. “Anything well written with good language and clarity and honesty is worth doing. It comes out of the same tradition as Shakespeare.” — Michael Moriarty

28. “Men are as we have always known them, neither better nor worse from the hearts of rogues there springs a latent honesty, from the depths of honest men there emerges a brutish appetite – a thirst for extermination, a desire for blood.” — Frederica Montseny

29. “That inner voice has both gentleness and clarity. So to get to authenticity, you really keep going down to the bone, to the honesty, and the inevitability of something.” — Meredith Monk

30. “I’d much rather have the honesty than not. Because if you will say what’s on your mind and get it off your chest, then the sooner I can prove you wrong!” — Garth Brooks

32. “Goodness is about character – integrity, honesty, kindness, generosity, moral courage, and the like. More than anything else, it is about how we treat other people.” — Dennis Prager

33. “The very spring and root of honesty and virtue lie in good education.” — Plutarch 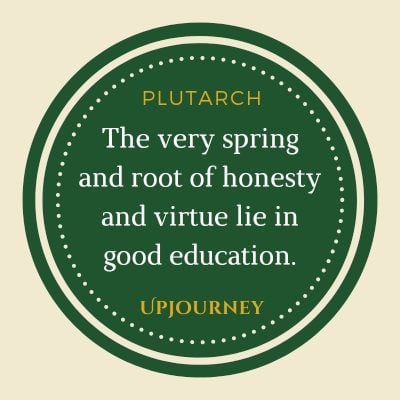 34. “Dishonesty in government is the business of every citizen. It is not enough to do your own job. There’s no particular virtue in that. Democracy isn’t a gift. It’s a responsibility.” — Dalton Trumbo

35. “No legacy is so rich as honesty.” — William Shakespeare

37. “Honesty prospers in every condition of life.” — Friedrich Schiller

38. “That’s a wonderful thing, because one of the primary qualities of a good performance is honesty.” — Roberta Flack

39. “Intellectual honesty is the quality that the public in free countries always has expected of historians; much more than that it does not expect, nor often get.” — Samuel E. Morison

42. “I look for these qualities and characteristics in people. Honesty is number one, respect, and absolutely the third would have to be loyalty.” — Summer Altice

43. “I think the greatest rogues are they who talk most of their honesty.” — Anthony Trollope 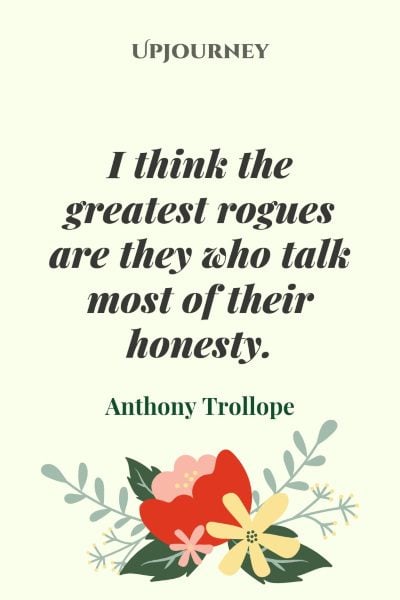 46. “The best measure of a man’s honesty isn’t his income tax return. It’s the zero adjust on his bathroom scale.” — Arthur C. Clarke

47. “You will reciprocally promise love, loyalty and matrimonial honesty. We only want for you this day that these words constitute the principle of your entire life and that with the help of divine grace you will observe these solemn vows that today, before God, you formulate.” — Pope John Paul II

48. “The person who is brutally honest enjoys the brutality quite as much as the honesty. Possibly more.” — Richard J. Needham

49. “What makes a woman beautiful is her loyalty to and her friendships with other women, and her honesty with men.” — Vanessa Marcil

50. “Sexuality is a big issue, but there are others – how much you commit to a relationship, to social obligation, to honesty and being honest with yourself.” — Ang Lee

52. “Honesty pays, but it doesn’t seem to pay enough to suit some people.” — Kin Hubbard

53. “Confidence in others’ honesty is no light testimony of one’s own integrity.” — Michel de Montaigne 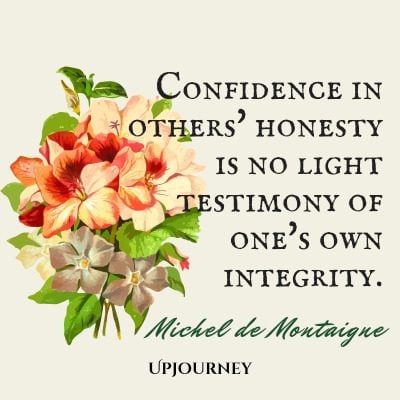 54. “Would that the simple maxim, that honesty is the best policy, might be laid to heart; that a sense of the true aim of life might elevate the tone of politics and trade till public and private honor become identical.” — Margaret Fuller

55. “Honesty is a good thing, but it is not profitable to its possessor unless it is kept under control.” — Don Marquis

56. “The true measure of life is not length, but honesty.” — John Lyly

57. “The first question at that time in poetry was simply the question of honesty, of sincerity.” — George Oppen

58. “Drawing is the honesty of the art. There is no possibility of cheating. It is either good or bad.” — Salvador Dali

59. “All men profess honesty as long as they can. To believe all men honest would be folly. To believe none so is something worse.” — John Quincy Adams

60. “Neither soldiers nor money can defend a king but only friends won by good deeds, merit, and honesty.” — Sallust

61. “Confidence… thrives on honesty, on honor, on the sacredness of obligations, on faithful protection and on unselfish performance. Without them it cannot live.” — Franklin D. Roosevelt

62. “He that fails in his endeavors after wealth or power will not long retain either honesty or courage.” — Samuel Johnson

63. “The greatest truth is honesty, and the greatest falsehood is dishonesty.” — Abu Bakr 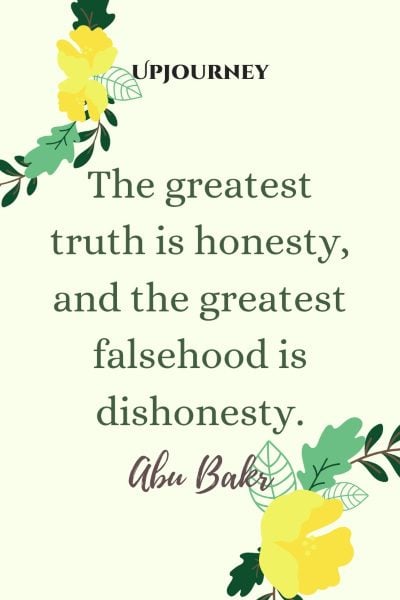 64. “I have built my reputation on honesty, I have sometimes been too honest.” — David Blunkett

66. “Honesty does not always bring a response of love, but it is absolutely essential to it.” — Ray Blanton

67. “Honesty is the first chapter in the book of wisdom.” — Thomas Jefferson

69. “Honesty is the cornerstone of all success, without which confidence and ability to perform shall cease to exist.” — Mary Kay Ash

70. “I think there’s a form of honesty, because I used to be very honest with the press, and then it backfired on me, and I understood it.” — Shia LaBeouf

71. “And, because there was an honesty about all that was going on. It connected with the people in the street.” — Ben E. King

72. “I believe fundamental honesty is the keystone of business.” — Harvey S. Firestone 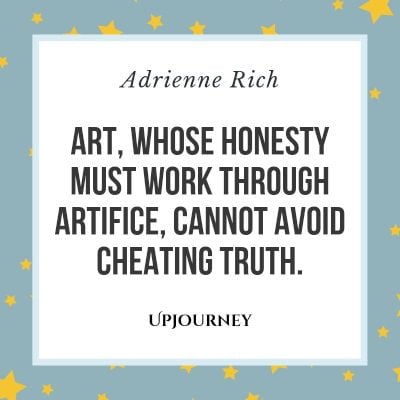 74. “Concentration is my motto – first honesty, then industry, then concentration.” — Andrew Carnegie

75. “I feel like my honesty gives people the freedom to talk about things they wouldn’t otherwise.” — Jane Fonda

76. “Industry, economy, honesty, and kindness form a quartet of virtues that will never be improved upon.” — James Oliver

77. “Irony is just honesty with the volume cranked up.” — George Saunders

78. “Regardless of the moral issue, dishonesty in advertising has proved very unprofitable.” — Leo Burnett

80. “The discipline of the written word punishes both stupidity and dishonesty.” — John Steinbeck

81. “Commend a fool for his wit, or a rogue for his honesty and he will receive you into his favor.” — Henry Fielding

82. “Marriage requires searing honesty at all costs. I learned that from my third wife.” — Alan Arkin

83. “The trite saying that honesty is the best policy has met with the just criticism that honesty is not policy. The real honest man is honest from conviction of what is right, not from policy.” — Robert E. Lee 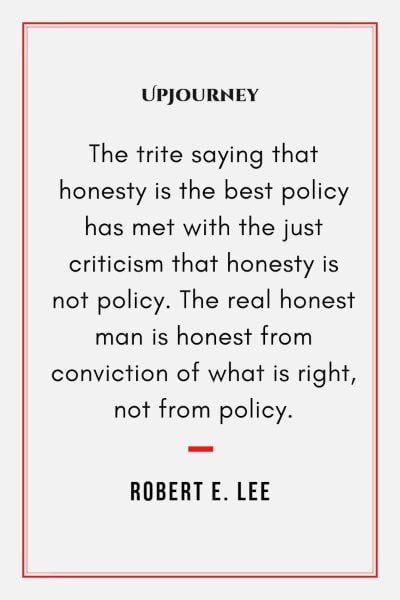 84. “For the merchant, even honesty is a financial speculation.” — Charles Baudelaire

85. “He that loseth his honesty hath nothing else to lose.” — John Lyly

86. “Honesty has come to mean the privilege of insulting you to your face without expecting redress.” — Judith Martin

87. “Honesty is as much saying everything as it is saying what is true.” — Richard Snelling

88. “As a governor and senator, John Chafee set the standard for honesty and decency that the rest of us on our best days could only dream to emulate.” — John McCain

89. “Honesty is something you can’t wear out.” — Waylon Jennings

90. “Acting is all about truth and honesty, and the sensitivity that’s capable of transporting you.” — Thomas Kretschmann

93. “The elegance of honesty needs no adornment.” — Merry Browne 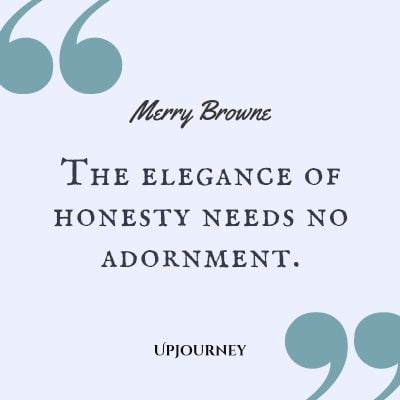 94. “In all honesty, I’m not able to talk about contracts. It’s nothing with ‘American Idol’ in particular, it’s just things I really need to take care of in my life.” — Mario Vazquez

96. “Accuracy is the twin brother of honesty; inaccuracy, of dishonesty.” — Nathaniel Hawthorne