Whenever you say “creepy crawlies”, people get you’re talking about something to be avoided (even if they don’t speak English!). It sounds somewhat melodious, but gives you shivers down your spine. Don’t you shake your body when you hear “creepy crawlies”? Most people do as if shaking your body makes sure none of those creatures can get stuck on you.

Discover in this article, 25 Most Creepy Quotes and use them as food for thought.

“Most things we fear never happened, and most probably, never will.”

We are wired to shift our attention to creepy things and stay focused on them for hours. Why? Because looking at the bomb gives us the false sense of security “I’ll know when it explodes”… Very reassuring (this is a point where you can smile… Reassuring indeed).

Inspire yourself from these 25 Creepy Quotes so that you can wash off your mind of those creepy thoughts that keep you up at night.

Our mind doesn’t understand the meaning of the word “No”. It’s an abstract concept for which we can’t make relevant pictures in our mind. The only pictures you can make are some derivations from road signs, the spelling of the word, or human gestures. Beyond that, our mind has to rely on common sense and guess what does it “no” mean.

Why is this important to know? Because, as your mind can’t give an accurate representation of what means no, also it makes little difference between reality and imagination.

If you imagine, for example, something creepy, your body react as if that something is in front of you. Whatever you imagine happening it feels like it already happened.

That’s the reason why one of the most offered advice these days is “believe you can“. When you say “I can do this” (and genuinely mean it), you will do whatever it takes to make it real.

What are creepy thoughts?

They are those things that, when you hear about or see them, feel the need to shake them off quickly.

If you’re wondering if other creatures have creepy thought, just think about the look that your dog gives you seeing you collecting his poop. “What is this nutter doing with my s***? Is it valuable? Or maybe… oh, horrible… It must be poisonous.”

Check this out! The following joke is considered the funniest in the world.

Two friends go hunting. Walking in the forest, suddenly, one of them knocks his head on a branch and passes out. The other one tries to wake him up with no success. Desperately, calls the emergency services.

“Please help! I think my friend is dead.”
“Come down, sir; I’ll help. Why do you think he’s dead? He’s not breathing?”
“I don’t know… He looks dead.”
“I can’t help you until I know, exactly what’s the situation. So, first let’s make sure he’s dead.”
“Just a minute…” followed by silence a few seconds and then a loud bang… And another bang.
“Now I know, he’s dead for sure. What do we do next?”

Even though the joke is creepy it made you laugh, right?

Whenever you have creepy thoughts about yourself or the future, allow yourself to laugh at them.

I’ll give you one last thing to think about before delivering to you the 25 Most Creepy Quotes as promised.

What you’re about to read is one of the creepiest things we do in life.

Many of us sacrifice countless relationships and things to make sure we get as safely as possible to death… as if dying was not enough enjoyable moment if you didn’t get there safe and sound.

1. We feel most alive when we are closest to death. — Nenia Campbell, Terrorscape 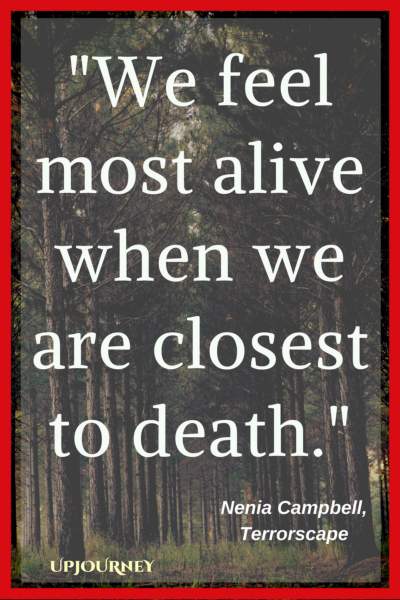 2. When you think about it, most of the good ideas came along to make sin a whole lot easier. — Joe Hill, Horns: A Novel

Pink Floyd has put the idea of this quote into two simple words “Comfortably Numb”. Sometimes we go through life being in that state of mind (Comfortably Numb), forgetting that one of the most precious things we have in life is time.

Live in the present moment and never forget your precious time. Never forget that your life deserves to be lived to the fullest, enjoyed, cherished, and loved.

Too often we get comfortable in bad situations; that happens when we are too scared to face the unknown, change things, push ourselves forward.

4. Our love was a two-person game. At least until one of us died, and the other became a murderer. — Dark Jar Tin Zoo

5. My pain is constant and sharp and I do not hope for a better world for anyone, in fact, I want my pain to be inflicted on others. I want no one to escape, but even after admitting this there is no catharsis, my punishment continues to elude me and I gain no deeper knowledge of myself; no new knowledge can be extracted from my telling. This confession has meant nothing. — Bret Easton Ellis, American Psycho

6. Flesh could not keep its glamour, nor eyes their sheen. They would go to nothing soon. But monsters are forever. — Clive Barker, The Dark Fantastic

7. You cut up a thing that’s alive and beautiful to find out how it’s alive and why it’s beautiful, and before you know it, it’s neither of those things, and you’re standing there with blood on your face and tears in your sight and only the terrible ache of guilt to show for it. — Clive Barker

8. People don’t get better, they just get smarter. When you get smarter you don’t stop pulling the wings off flies, you just think of better reasons for doing it. — Stephen King 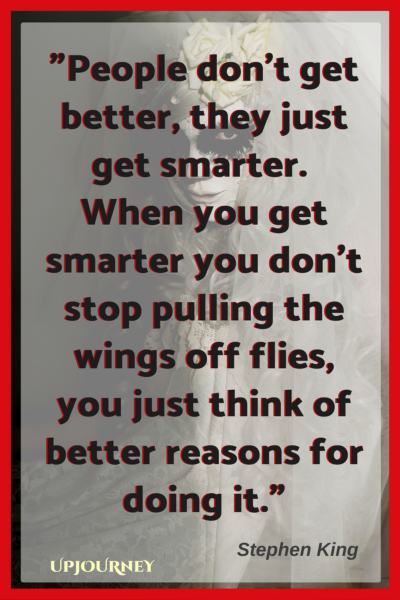 9. Sometimes I think I won’t ever feel safe until I can count my last days on one hand. Three more days to get through until I don’t have to worry about life anymore. — Gillian Flynn, Sharp Objects

The most difficult things to get for those living in unsafe environments are hopes and dreams. When bad things happen every day all around them, life can feel too long. Isn’t that a creepy thought to have?!

Most of us have the luxury of a short memory. You cannot allow your memory to fail you if that’s jeopardizing your survival and prosperity.

When I was a teenager my father asked me “Do you believe in miracles?” My answer was “Yes, I do; it’s a miracle that we get every day safely at home.”

We lived in a quiet and peaceful town; and yet, I had the awareness that only one split second separates life from death.

If you have the feeling that life is too long, make an effort to change your environment and circumstances.

10. I’ll tell you now. That silence almost beat me. It’s the silence that scares me. It’s the blank page on which I can write my own fears. The spirits of the dead have nothing on it. The dead one tried to show me hell, but it was a pale imitation of the horror I can paint on the darkness in a quiet moment. — Mark Lawrence, Prince of Thorns

11. And the most terrifying question of all may be just how much horror the human mind can stand and still maintain a wakeful, staring, unrelenting sanity. — Stephen King, Pet Sematary

12. When I came into your life your life was over. It had a beginning, a middle, and an end. This is the end. — Cormac McCarthy, No Country for Old Men

13. We are all our own graveyards, I believe; we squat amongst the tombs of the people we were. — Clive Barker, Flash Wisdom 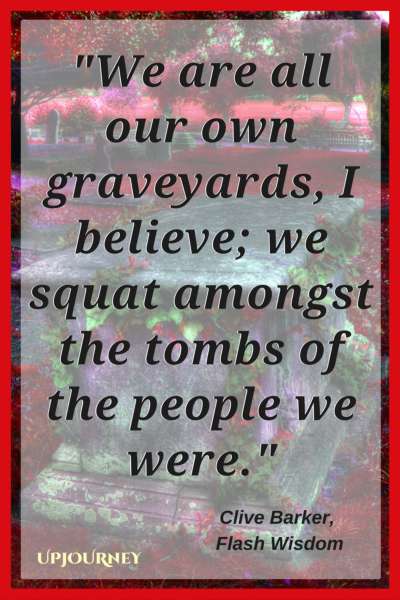 14. Him and God are supposed to be at war with each other. But if God hates sin and Satan punishes the sinners, aren’t they working the same side of the street? Aren’t the judge and the executioner on the same team? — Joe Hill

16. Here is a list of terrible things,
The jaws of sharks, a vultures wings
The rabid bite of the dogs of war,
The voice of one who went before,
But most of all the mirror’s gaze,
Which counts us out our numbered days.
— Clive Barker, Days Of Magic, Nights Of War

17. All I could think of when I got a look at the place from the outside was what fun it would be to stand out there and watch it burn down. — Shirley Jackson, The Haunting of Hill House

18. Wendy? Darling? Light, of my life. I’m not gonna hurt ya. I’m just going to bash your brains in. — Stephen King, The Shining

19. I was not a lovable child, and I’d grown into a deeply unlovable adult. Draw a picture of my soul, and it’d be a scribble with fangs. — Gillian Flynn, Dark Places 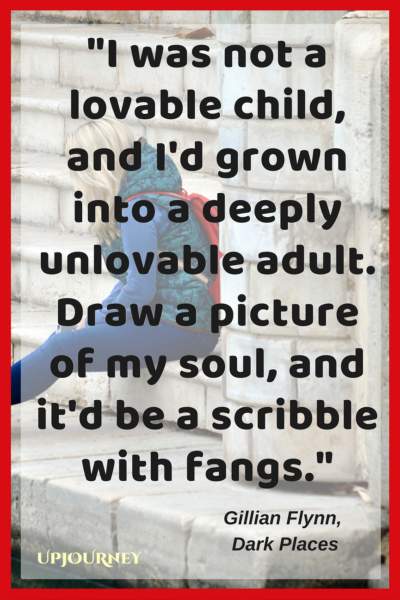 21. I lay in bed and thought about how easy it was to hurt a person. It didn’t have to be physical. All you had to do was take a good hard kick at something they cared about. — Jack Ketchum, The Girl Next Door

Yes, there is a small minority of individuals (among us) which find it easy to hurt someone else. Luckily, for most of us, that’s inconceivable!

However, with all our good intentions, it can happen to all of us to hurt others when we allow our vanity and sense of entitlement to have the last say.

Would you like to know how to minimize the chances for that happening to you? Improve your social skills, and know that every time you’re doing something nice for others, you gain self-respect and positive thoughts.

22. Because there was only one thing worse than dying. And that was knowing you were going to die. And where. And how. — Richard Matheson, Nightmare At 20,000 Feet: Horror Stories By Richard Matheson

23. You are not special. You’re not a beautiful and unique snowflake. You’re the same decaying organic matter as everything else. We’re all part of the same compost heap. We’re all singing, all dancing crap of the world. — Chuck Palahniuk, Fight Club 2

24. Maybe all the schemes of the devil were nothing compared to what man could think up. — Joe Hill, Horns: A Novel 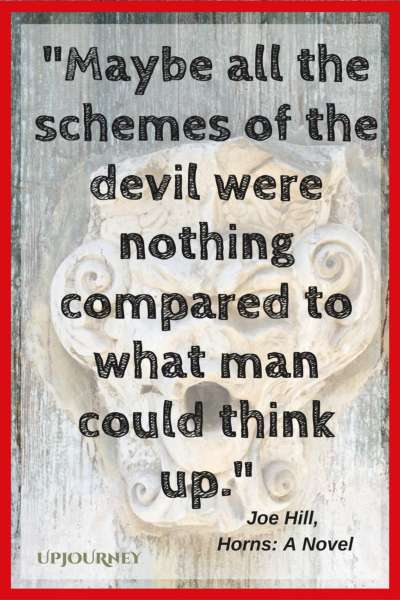 25. I had all the characteristics of a human being—flesh, blood, skin, hair—but my depersonalization was so intense, had gone so deep, that my normal ability to feel compassion had been eradicated, the victim of a slow, purposeful erasure. I was simply imitating reality, a rough resemblance of a human being, with only a dim corner of my mind functioning. — Bret Easton Ellis, American Psycho