Respecting one another is very important. Being rude is a trait of inconsiderate and selfish people who treat others like they are worthless. Avoid these type of toxic people as much as possible, and you will see how your life improves.

May these quotes encourage you to respect yourself and other people to a higher standard:

1. Self-respect is the cornerstone of all virtue. – John Herschell

Among other things, respecting yourself is a sign of self-love and acceptance. If you feel you need an incentive to allow yourself to appreciate who you are, as you are, remind yourself that you teach others how to treat you.

Respecting others starts with respecting yourself. Check out the following example of how self-respect is determining how much one respects others. A daughter (of a loving and caring mother) gets involved with a guy that’s mistreating her. Pretty soon, the daughter starts calling herself nasty names, thinking she’s worthless… her mother’s love and care become a distant past, it feels like never happened.

The daughter, by not respecting herself, disrespects all the things her mother did or wants to do for her, shattering the fantastic relationship, mother – daughter, they used to share.

2. Respect is earned. Honesty is appreciated. Trust is gained. Loyalty is returned. 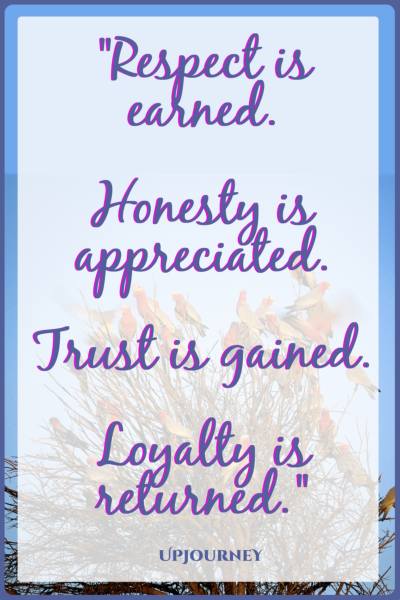 3. You can’t force someone to respect you, but you can refuse to be disrespected.

4. As we grow as unique persons, we learn to respect the uniqueness of others. – Robert Schuller

5. Respecting others’ opinions doesn’t mean being untrue to our own. – P. M. Forni

One of the most important rules of influencing others, tolerance, and compassion, it’s respecting others opinion. Out of vanity, we forget this rule way too often.

Many great relationships fall apart because people refuse to validate each other’s opinions and feelings.

6. Life is short, and we should respect every moment of it. – Orhan Pamuk

7. Ironically people tend to change their attitude towards you when you begin treating them the way they treat you.

8. When we show our respect for other living things, they respond with respect for us. – Arapaho proverb

9. Respect yourself enough to walk away from anything that no longer serves you, grows you or makes you happy. 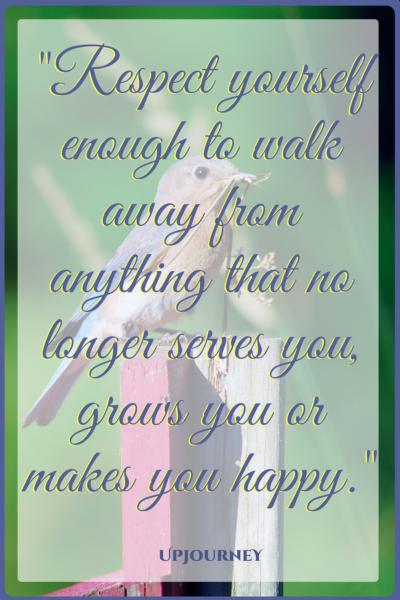 10. A human being is not to be handled as a tool but is to be respected and revered. – Felix Adler

11. When you practice gratefulness, there is a sense of respect toward others. – Dalai Lama

12. How people treat other people is a direct reflection of how they feel about themselves.

13. The right to be respected is won by respecting others. – Vasyl Sukhomlynsky

14. There is no respect for others without humility in one’s self. – Henri Frederic Amiel

15. We must express ourselves in ways that demonstrate our respect for others. – Stephen Carter

16. Don’t lower your standards for anyone or anything. Self-respect is everything.

17. Never judge someone by the way he looks or a book by the way it’s covered; for inside those tattered pages, there’s a lot to be discovered. – Stephen Cosgrove

18. Treat others with respect and others will respect you. – Anthony Douglas Williams

20. The only true disability is the inability to accept and respect differences. 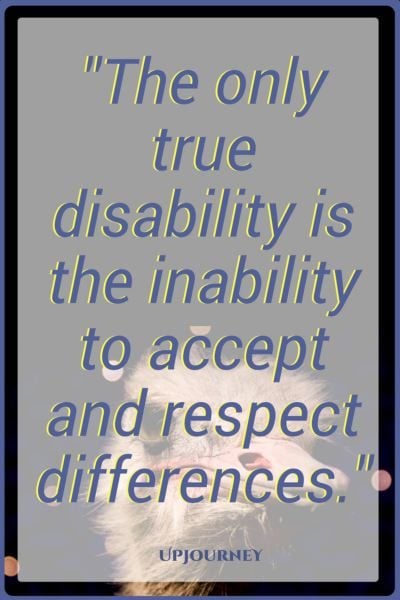 21. The art of conversation is the art of hearing as well as of being heard. – William Hazlitt

22. Truly powerful women don’t explain why they want respect. They simply don’t engage those who don’t give it to them.

24. The key is to learn to respect and honor the complications of other people’s lives. – Goldie Hawn

An encouraging word can do more than almost anything else to influence a person to change their behavior towards you. Yes, it happens to dislike some people when you meet them. However, hadn’t happened to you to change your mind when you learned their story?

Aren’t you annoyed when a child makes a lot of noise in a restaurant? But how annoyed are you after finding out that the child lost his mother a week ago?

Life is complicated; life builts up our story and history. Respecting others, sometimes means silencing your judgemental thoughts (we all have them), and listening.

25. Respect yourself above all. – Pythagoras

27. I respect the man who knows distinctly what he wishes. – Johann Wolfgang von Goethe

28. No one can make you feel inferior without your consent. – Eleanor Roosevelt

29. Knowledge will give you power, but character respect. – Bruce Lee

30. Without feelings of respect, what is there to distinguish men from beasts? – Confucius 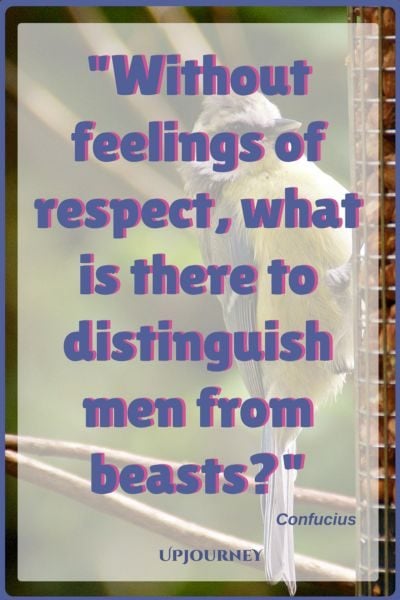 32. Deeply respecting yourself is the first step toward having a deep respect for others. – Amy Leigh Mercree

33. Self-respect is a question of recognizing that anything worth having has a price. – Joan Didion

34. Only those who respect the personality of others can be of real use to them. – Albert Schweitzer

35. Respect means you care enough to think about others’ feelings before you act.

37. Only a true man can earn the love and respect of a strong and independent woman.

How do you feel when you hear “don’t cry like a little girl”? Because (you see?) little boys cry too… as they should!

“Don’t cry like a little girl” is shaping boys to become unhappy men.

To earn the love and respect of a strong woman, a man must learn how to manage and deal with his emotions. Sadly, many men avoid showing any kind of emotion, unaware of the fact that, by doing so, display only negative emotions.

[Allow me a little digression for all the men saying that to their lovely women – men have hormones too. The only difference is that women are aware of not always displaying the best self, and the man (saying that) are displaying being hormonal by shouting, getting angry, complaining, and moaning.]

For all of us, self-respect means (among other things) learning how to deal with our emotions so that we can attract in our lives positive and loving people.

38. If we lose love and self-respect for each other, this is how we finally die. – Maya Angelou

40. A lack of boundaries invites a lack of respect.

43. Don’t let someone get comfortable with disrespecting you. 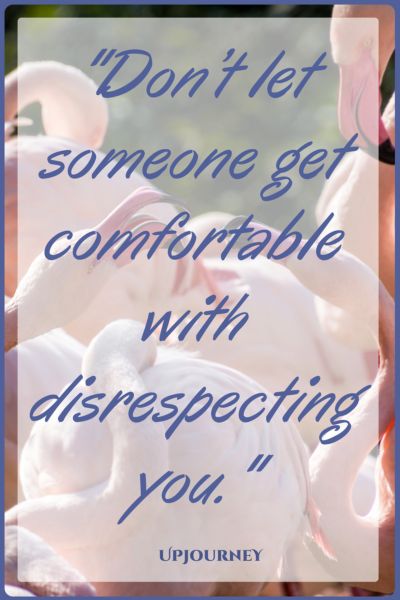 44. Acting with speed will garner you respect, awe, and irresistible momentum. – Robert Greene

45. I speak to everyone in the same way, whether he is the garbage man or the president of the university. – Albert Einstein

48. If you don’t feel respected, you won’t be engaged in your work. – Linda Hill

49. A child who is allowed to be disrespectful to his parents will not have true respect for anyone. – Billy Graham

50. One of the most sincere forms of respect is actually listening to what another has to say. – Bryant H. McGill