The Moon holds a mysterious kind of beauty with all its different phases.

Scientifically speaking, the Moon is a celestial body that orbits our planet as its only naturally permanent satellite. No one knows how it came to be. However, the widely accepted explanation is that the Moon came from the impact between Theia (an ancient hypothesized planet the size of Mars) and Earth.

Besides the Moon’s influence on the ocean’s tides, this astronomical body has many influences and holds different meanings in culture and mythology. For example, the mythical creature, werewolf, only transform during a full moon.

Gods and goddesses from different pantheons are also associated with the Moon. Some of these lunar deities are Selene and Artemis from Greek Mythology, Chang’e from Chinese Mythology, and Thoth from Egyptian mythology.

In astrology, the moon sign symbolizes one’s emotions and the inner self.

Revel under the moonlight as you read several of the best moon quotes and sayings to remind you to gaze into the Moon’s radiance every night.

1. “We are here and it is now. Further than that, all human knowledge is moonshine.” — H. L. Mencken

2. “Moon! Moon! I am prone before you. Pity me, and drench me in loneliness.” — Amy Lowell

3. “What was most significant about the lunar voyage was not that men set foot on the moon but that they set eye on the earth.” — Norman Cousins

4. “Women, we might as well be dogs baying the moon as petitioners without the right to vote!” — Susan B. Anthony 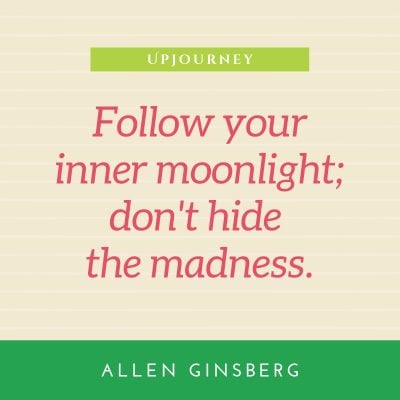 6. “They don’t know how the world is shaped. And so they give it a shape, and try to make everything fit it. They separate the right from the left, the man from the woman, the plant from the animal, the sun from the moon. They only want to count to two.” — Emma Bull

10. “If there are bases on the moon, that would be the end of the moon as we know it.” — Laurie Anderson

12. “Gray hairs seem to my fancy like the soft light of the moon, silvering over the evening of life.” — Jean Paul

13. “Someday when peace has returned to this odd world I want to come to London again and stand on a certain balcony on a moonlit night and look down upon the peaceful silver curve of the Thames with its dark bridges.” — Ernie Pyle

14. “A dreamer is one who can only find his way by moonlight, and his punishment is that he sees the dawn before the rest of the world.” — Oscar Wilde 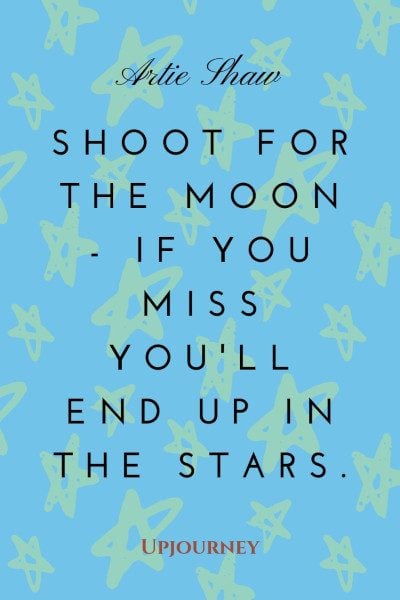 16. “Men are like the earth and we are the moon; we turn always one side to them, and they think there is no other, because they don’t see it – but there is.” — Olive Schreiner

17. “The moon is essentially gray, no color. It looks like plaster of Paris, like dirty beach sand with lots of footprints in it.” — James A. Lovell

19. “There are moments, above all on June evenings, when the lakes that hold our moons are sucked into the earth, and nothing is left but wine and the touch of a hand.” — Charles Morgan

20. “For most people, we often marvel at the beauty of a sunrise or the magnificence of a full moon, but it is impossible to fathom the magnitude of the universe that surrounds us.” — Richard H. Baker

21. “And Fall, with her yeller harvest moon and the hills growin’ brown and golden under a sinkin’ sun.” — Roy Bean

23. “I think we’re going to the moon because it’s in the nature of the human being to face challenges. It’s by the nature of his deep inner soul… we’re required to do these things just as salmon swim upstream.” — Neil Armstrong

25. “The moon is at her full, and riding high, Floods the calm fields with light. The airs that hover in the summer sky Are all asleep tonight.” — William C. Bryant 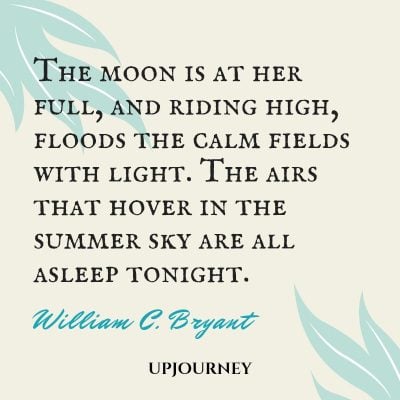 26. “The moon and other celestial bodies should be free for exploration and use by all countries. No country should be permitted to advance a claim of sovereignty.” — Lyndon B. Johnson

27. “What can we gain by sailing to the moon if we are not able to cross the abyss that separates us from ourselves? This is the most important of all voyages of discovery, and without it, all the rest are not only useless, but disastrous.” — Thomas Merton

28. “It is, alas, chiefly the evil emotions that are able to leave their photographs on surrounding scenes and objects and whoever heard of a place haunted by a noble deed, or of beautiful and lovely ghosts revisiting the glimpses of the moon?” — Algernon H. Blackwood

29. “The army is always the same. The sun and the moon change. The army knows no seasons.” — Frank S. Nugent

30. “I have seen the movement of the sinews of the sky, And the blood coursing in the veins of the moon.” — Muhammad Iqbal

34. “There’s not a wind but whispers of thy name; And not a flow’r that grows beneath the moon, But in its hues and fragrance tells a tale Of thee, my love.” — Barry Cornwall

35. “The moon is a friend for the lonesome to talk to.” — Carl Sandburg 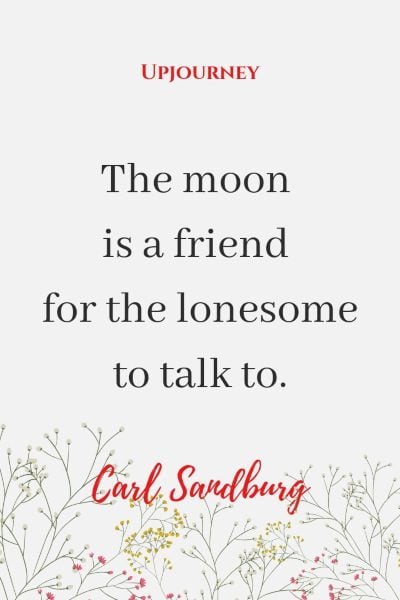 36. “The Moon and Mars were the two most likely candidates for life in the solar system; what exists beyond our solar system is mere guesswork.” — Walter Lang

37. “The book of Revelation says that we no longer need the sun or the moon, for Christ is the light of the world.” — Tim LaHaye

39. “They dined on mince, and slices of quince, Which they ate with a runcible spoon; And hand in hand, on the edge of the sand, They danced by the light of the moon.” — Edward Lear

40. “The moon is brighter since the barn burned.” — Matsuo Basho

42. “You cannot look up at the night sky on the Planet Earth and not wonder what it’s like to be up there amongst the stars. And I always look up at the moon and see it as the single most romantic place within the cosmos.” — Tom Hanks

43. “There is more He-3 energy on the Moon than we have ever had in the form of fossil fuels on Earth. All we have to do is to go there and get it.” — Wilson Greatbatch

44. “Stars that shine bling in the moon night, might I find true love squirreled away tonight?” — Isabel Yosito

45. “Don’t tell me the moon is shining; show me the glint of light on broken glass.” — Anton Chekhov 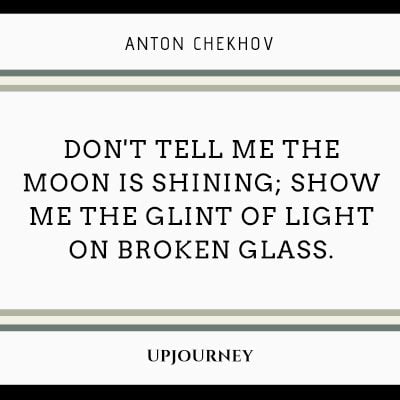 46. “Grief is a bad moon, a sleeper wave. It’s like having an inner combatant, a saboteur who, at the slightest change in the sunlight, or at the first notes of a jingle for a dog food commercial, will flick the memory switch, bringing tears to your eyes.” — Meghan O’Rourke

48. “Years of science fiction have produced a mindset that it is human destiny to expand from Earth, to the Moon, to Mars, to the stars.” — Barney Oliver

49. “I believe that the only way that the human race is gonna survive is to start colonizing space and setting up colonies on the moon, and then space stations.” — Ace Frehley

51. “I promise to be an excellent husband, but give me a wife who, like the moon, will not appear every day in my sky.” — Anton Chekhov

53. “When I admire the wonders of a sunset or the beauty of the moon, my soul expands in the worship of the creator.” — Mahatma Gandhi

54. “We’ll go back to the moon by not learning anything new.” — Burt Rutan

55. “The moon was a ghostly galleon tossed upon cloudy seas.” — Alfred Noyes 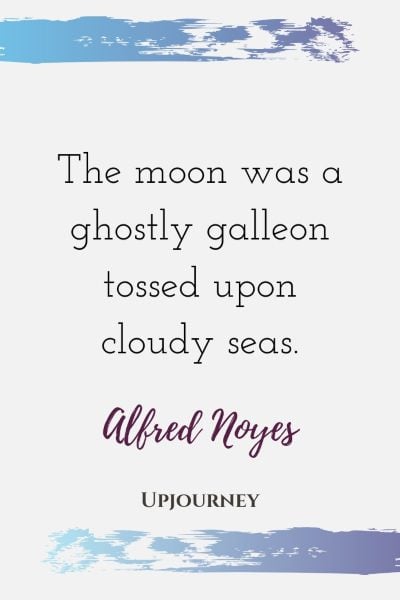 56. “The sun, the moon and the stars would have disappeared long ago… had they happened to be within the reach of predatory human hands.” — Henry Ellis

57. “There are nights when the wolves are silent and only the moon howls.” — George Carlin

58. “Everything has a natural explanation. The moon is not a god, but a great rock, and the sun a hot rock.” — Anaxagoras

59. “I did not want to write a story about the invasion of Earth, so I had to create a race capable of living nearby, which meant to either on the Moon, on Mars, or on Venus. I picked Venus.” — Sarah Zettel

62. “It was night and I could see a large and calm lake, reflecting the moon. Black mountains rose around it. I arrived from between two of these mountains, I looked at the lake and the moon, and that was it, nothing else happened.” — Georges Simenon

63. “The Moon! Artemis! the great goddess of the splendid past of men! Are you going to tell me she is a dead lump?” — David Herbert Lawrence

64. “From now on we live in a world where man has walked on the Moon. It’s not a miracle we just decided to go.” — Tom Hanks 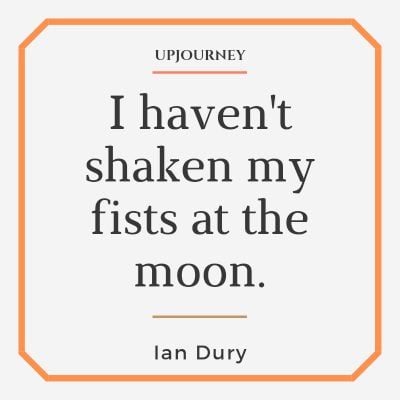 66. “Virtue could see to do what Virtue would by her own radiant light, though sun and moon where in the flat sea sunk.” — John Milton

67. “The earth together with its surrounding waters must in fact have such a shape as its shadow reveals, for it eclipses the moon with the arc of a perfect circle.” — Nicolaus Copernicus

68. “When a dog barks at the moon, then it is religion; but when he barks at strangers, it is patriotism!” — David Starr Jordan

70. “We knew it was going to be difficult to get to the moon. We didn’t know how difficult.” — Alan Bean

71. “Sometimes there is no darker place than our thoughts, the moonless midnight of the mind.” — Dean Koontz

72. “Our great symbol for the Goddess is the moon, whose three aspects reflect the three stages in women’s lives and whose cycles of waxing and waning coincide with women’s menstrual cycles.” — Carol P. Christ

73. “Those are the same stars, and that is the same moon, that look down upon your brothers and sisters, and which they see as they look up to them, though they are ever so far away from us, and each other.” — Sojourner Truth

74. “I did not wish to take a cabin passage, but rather to go before the mast and on the deck of the world, for there I could best see the moonlight amid the mountains. I do not wish to go below now.” — Henry David Thoreau

75. “Language exerts hidden power, like the moon on the tides.” — Rita Mae Brown 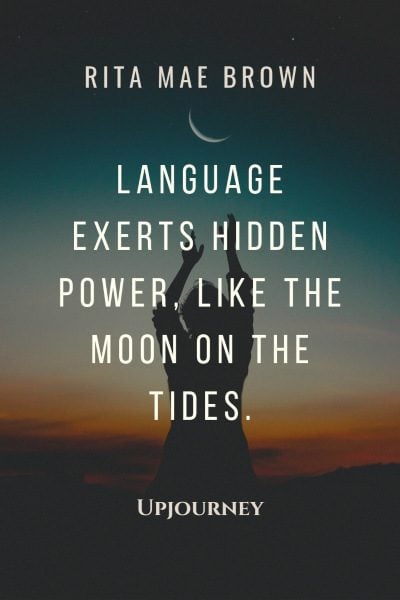 76. “But, truly, I have wept too much! The Dawns are heartbreaking. Every moon is atrocious and every sun bitter.” — Arthur Rimbaud

77. “The youth gets together his materials to build a bridge to the moon, or, perchance, a palace or temple on the earth, and, at length, the middle-aged man concludes to build a woodshed with them.” — Henry David Thoreau

79. “Music is moonlight in the gloomy night of life.” — Jean Paul

81. “You marvel at the economy and this choice of words. How many ways can you describe the sky and the moon? After Sylvia Plath, what can you say?” — Toni Morrison

83. “The faults of a superior person are like the sun and moon. They have their faults, and everyone sees them they change and everyone looks up to them.” — Confucius

84. “All action takes place, so to speak, in a kind of twilight, which like a fog or moonlight, often tends to make things seem grotesque and larger than they really are.” — Karl Von Clausewitz

85. “Tell me what you feel in your room when the full moon is shining in upon you and your lamp is dying out, and I will tell you how old you are, and I shall know if you are happy.” — Henri Frederic Amiel 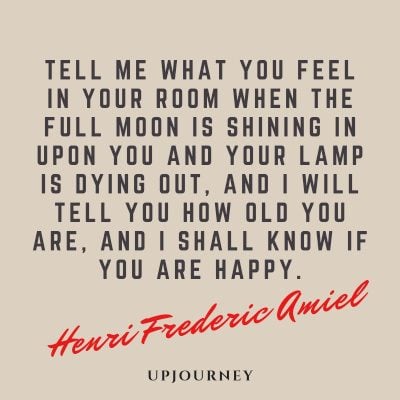